Front of the Sleep Sack

The sleep sack is made out of charcoal colored 2,2mm thick neoprene. The color sparked some debate under my testees: some liked the modern, sleek accent to their playroom, others said that the non-black color broke the all-black scheme of their playroom. I like the color but have to admit: despite the subtle tone it does „pop“ in an all black environment. The neoprene pieces are sewed together by sturdy black threat in cross-stitching. Unlike neoprene gear made for water sports the seams are not welded so they are not waterproof. Same applies to the zipper. There are three of them: one from YKK from the neck to mid-chest for easy entry, one above the dick and one above the ass from unknown manufacturers. Both these zippers have a small piece of neoprene covering the zipper from the inside so neither skin nor hair gets caught. Inside the bag there are sleeves for the arms which are closed on the end so the sub can’t touch himself. Around the neck hole there is a soft collar made out of black cloth. 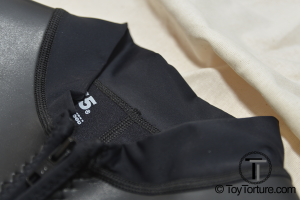 Soft Collar around the Neck

Size wise this sleep sack is a bit tricky: I have got the XL version which is made for people between 176cm and 186cm height, a 112cm to 117cm chest and a 89cm to 97cm waist. I am 1,89m tall and am neither especially beefy nor chubby and still I just barely fit in it. Because XL is the largest size (but they go down to a tiny S) the person you want to put into it shouldn’t be too large.

The right Arm Sleeve for an intense Bondage Experience

If I am informed correctly this is the most inexpensive bondage bag on the market so if you are doing kinky on the budget and want the tight total bondage or neoprene all-over experience this is the toy to get (for the total neoprene aficionado and/ or total immersion bondage fan 665 Leather also makes a neoprene bondage bag with attached hood for $485). A snug tight fit comes through the stretchiness as a material property of neoprene. This of cause means that the sub inside can wrestle and work out pain a bit more easily compared to a leather sleep sack. In order to prevent this from happening you can either do a rope harness over the bag (which looks especially hot when using a contrast rope color) or add belt-like straps like from Stylefetish (I have been waiting for these straps to arrive in time for posting this review but sadly they didn’t. I will post a small review of them as soon as they arrive and I can put a sub into them). For most bondage boys this added layer of restraining is a great turn-on. 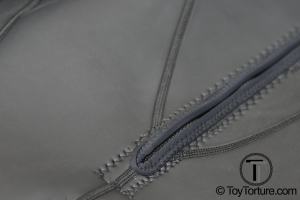 Detail of the Chest Zipper and the Stitching

The zippers grant access to all important play areas but the nipples. A bit problematic is the lack of some form of cloth your can pull out from below the zipper on both sides to cover the zipper because the stretchiness of the material tends to pull the two sides of the open zipper together. This can be a problem for the top when while fucking the sub the zipper teeth can irritate his dick skin or for the sub when his junk is taken out for being played with. At least for the sub most of the time putting on a Oxball Nuttsling p.e. will do the trick protecting the skin around his penis root. Nevertheless the stretchiness can also be an advantage: putting nipple clamps is a bit difficult but once they are in place they stay in place even when the chest is already moist or the sub wiggles around. If you can fuck or enjoy fucking somebody while he is in the sleep sack is a very personal thing. All but one top didn’t like „humping a plank“ but the one loved the objectification of his fuck toy. 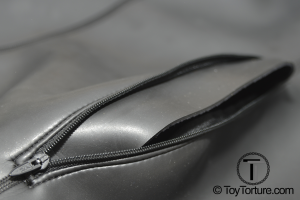 The Zipper over the Ass with the protective piece of neoprene

As mentioned above: the body bag is not waterproof. While I have not seen liquids leaking out off the seams the zippers above the ass is a problem. Because neoprene isolates so well this sleep sack is great for all kind of temperature scenes (please always monitor the hydration and overall body temperature of your sub!) or playing in chillier surroundings where a latex sleep sack would be too cold. But at some point the sweat will leak out of the rear zipper so put a towel under it. For anything nastier like letting the sub inside for so long that he pisses himself the sleep sack isn’t really made for. So either diaper up the sub or put the sleep sack on a surface which can be soiled by body fluids.