A Weekend with Velcro Restraints 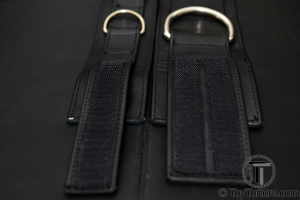 Straps of the Standard and Wide Version Compared

Three weeks ago I have spent the weekend in Berlin for the annual BLF Easter event which was a fun time although in unexpected ways. Just in time before packing for Berlin I have gotten two new velcro restraints from HML. I reviewed their first velcro restraint and was quite impressed, After the review was written they incorporated the suggestions I wrote and send me the two new models that came out of this process. So I tried a little experiment: How satisfied would I be with the restraints‘ performance if I only took them with my for the weekend thus being forced to use them?

The answer is: I was surprisingly satisfied. Or to be more precise: I didn’t miss anything yet playing with these restraints meant altering my play style a bit. When fastening roller buckle restraints I tend to pull the closing strap to the maximum in order to give the sub the message that I am in control now and then loosen the restraints that they are comfortable yet tight. This position is mostly a compromise because the space between the holes in the strap specify the raster in how tight you can fasten the restraints. Since you don’t have a buckle to run the velcro strap through there is no fastening effect. But due to the nature of velcro you can adjust the strap in every desired position enabling you to play with the sub’s expectations. I put the wide heavy duty restraints on one sub’s wrists and he really enjoyed the feeling of being bound by a wide strap of solid and soft leather but he waited that the grip of the restraints would decrease which it didn’t because I had already closed the strap. It freaked him out a bit in a good way.

D-Rings of the Standard and Wide Version Compared

This easy handling is another thing I have grown fond of. With a bit of training in order to keep the velcro to stick together in a wrong way you can quickly immobilize someone without having to fiddle a strap through a loop. Especially when travelling or packing toys for locations where you can’t walk around with a big bag of toys like the LAB the compact form factor is a nice feature. They are also lighter than restraints of the same size because they have less metal. This might sound like bean counting but if I pack for an event I have to go by plane I am happy for every 100g I can safe. 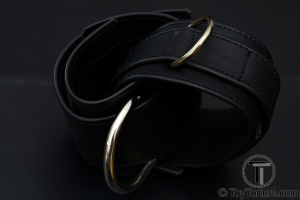 The Ankle Restraint put into the Heavy Duty Wrist Restraint

HML also addressed the length problem of the restraints: Along the standard wrist restraints I reviewed last month there is now also a set of ankle restraints available. Since the muscles in the legs are usually stronger than the ones in the arms the velcro strap has to deal with more force. This increased the noises of velcro fighting with the struggling sub but even with a beefy muscle sub they didn’t fail me. Still, if you need more security HML now also makes new heavy duty Velcro restraints from which I could test the wrist restraints. They have twice the amount of velcro with a little bit longer strap than sinlge-strap wrist restraints giving you wider range of circumference. So if your sub has thin ankles you can use them also for fettering the legs for an extra bondage kick. If you want to put them over boots, you have to get the heavy duty ankle restraints. An important thing to keep in mind is that due to the thicker D-ring on the heavy duty restraints the space used for sowing the belt onto the body increases thus the minimum circumference is bigger than on the single-strap version. I have a glove size 7 ½ and while the restraints are not closely fettered onto my wrist they don’t slip over my hand. But for people with really small hands, I recommend the standard wrist restraints. Because naturally I tried out the toys before using them in the field I took all three restraints with me feeling confident that they will perform well when I went out intending to find a sub to top. 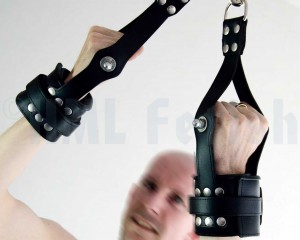 One thing I have missed in Berlin were hanging restraints. Especially unpadded wrist restraints are uncomfortable when the arms are suspended over the head. HML already makes a set of padded suspension restraints with velcro straps for 149,90€ for these situations which I might review in the future.

Since there is now a set of wrist and ankle restraints out there these restraints will become the second set of everyday restraints I have been looking for quite some time – so I now need to start looking for the third set which locks with a pin.

Long story short: All three velcro restraints I had with me and used extensively during the weekend lived up to the promise to be fully substitutes for unpadded restraints. They will probably become the regular travel restraints for me because especially the non-heavy duty set is small enough to get stores in my toiletry bag.