ToyTorture.com is now 6 years old and in this time I think I have gained some insight into the toy scene and what my readers are interested in. But sometimes, a toy comes along which provokes a reaction I did not anticipate. The Oxballs Ass Blaster is one of these toys. I have bought this toy to make a fantasy of mine come true and never thought I would review it. But the mandatory “Hey look, I have gotten a new toy”-post on Tumblr actually became the third popular of all my Tumblr posts. Since then every few weeks a message dropped into my inbox when I would be reviewing the Ass Blaster. So here it is, even thought there is not that much to “review”. 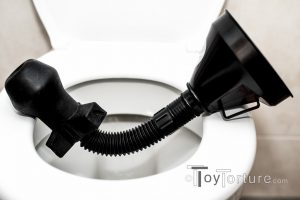 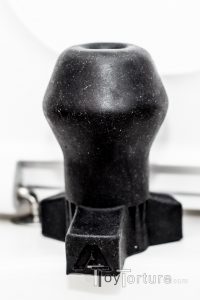 The Plug of the Oxball Ass Blaster

The Ass Blaster is a two-part toy consisting off a funnel and a plug. The funnel has an opening diameter of 135mm and is approx. 120mm high. On one side of the funnel has a grip which can be used to attach it to a bondage harness in order to keep it upright. To the funnel’s nozzle a flexible  spout is attached which is approx. 130mm high when bend to a 90° angle. The funnel has a capacity of roughly 600ml and the spout an additional 100ml. The max. flow rate is about 4,000ml per minute which adds up to allowing two people with a strong piss stream to fill the funnel simultaneously without problems – if the bottom is receptive enough. At the bottom of the funnel there is a filter screen to keep solid objects from clogging the spout or nozzle.

The plug
comes in three sizes and is available in black and red. It has a roughly the shape
of a mortar bomb with a tapered head which due to the tunnel in the middle has
a rather dull tip. The three fins at the end are large and wide to allow
handling the Ass Blaster even with lubey fingers and to keep it from getting
sucked into a greedy ass even during long scenes. A nice touch is the caption A
S S on the outside of the fins. A lot of material has been used on the entire
toy thus the walls are rather thick. This makes it almost impossible for the
bottom to shut the flow with his ass. 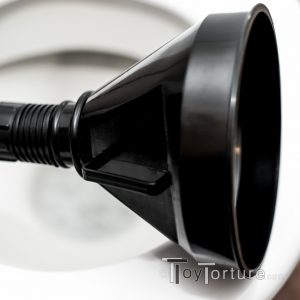 Playing with the Ass Blaster

The Ass
Blaster is kind of a one purpose toy: To turn the bottom’s ass into a urinal. A
friend of mine owns the small plug and has a bottom with a really large mouth
who can swallow the plug. Add a bit of tape to that and voila. But is has to be
noted that through the large size it will quickly tire out the sub’s jaw.

Unlike theother Oxballs piss toys (like the Recycler which I reviewed earlier this year,the Urinal Piss Gag or the Flush-Plug) the large opening which allows for two peopleto use it simultaneously, the large liquid filling quantity and high flow rateactually make this toy party urinal equipment. The piss flow straight into the rectumwhich distinguished the Ass Blaster from the Pig-Hole. Through the barrel shapeof the hollow plug a lot of piss does not flow into the bottom but stays insidethe plug. However, the Pig-Hole is a useful toy in combination with the AssBlaster. Through the dull tip the plug is actually more for the anal savvybottom. But if he is that trained, the actually size is rather small. While theplug might not fall out of his ass, the piss can easily leak. To prevent thisto a certain degree, simply put a Pig-Hole into the bottom’s ass and plug itwith an Ass Blaster. 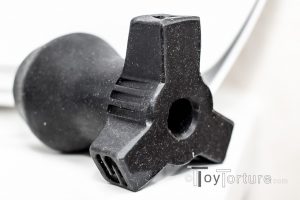 Detail of the Ass Blaster’s Fin

Most rectums can only take about 500ml. While this can be trained over time, backflow or leakage at some point cannot be prevented. To facilitate the piss flow behind the inner sphincter and into the colon, the bottom should push his ass out in doggy position and lay down flat with his torso.

You can
pick the small Ass Bluster up at Regulation for £59.90.