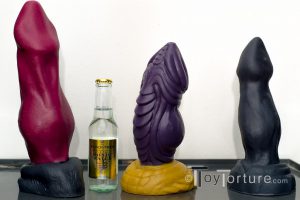 Bad Dragon’s David the Werewolf (XL), Apollo the Chimera (XL) and Vergil the Drippy Dragon with a Bottle of my Favorite Tonic Water for Size Comparison 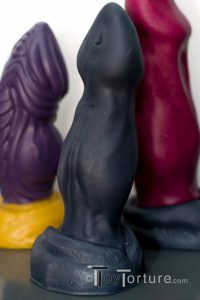 Silicone toys are great if you use them with multiple partners. Even on a microscopic level it is super smooth so bacteria have a hard time to establish themselves. The smoothness and heat resistance also benefits cleaning because you can easily wash the toy with hot soapy water and spray it with a sanitizer afterwards. If you want to be really sure you can actually autoclave the toy.

When it comes to lube silicone is a bit special. ONLY use water- or oil-based lubes! The silicone oil in silicone or hybrid lubes will disintegrate the toy!

Currently Bad Dragon offers different 52 shapes all inspired by fantasy creatures. Most of the toys have a size range from small (close to the size of a normal dick) to XL (for the experienced fistee) so almost everybody can enjoy the shape matching his width experience level. One thing to keep in mind when choosing the size is the ration between maximum diameter and length. Unlike most other anal toys at Bad Dragon the maximum diameter in the lower third of the shaft. So even though you theoretically might be able to take the diameter if you are not trained for depth you might never reach it. So carefully asses your training level and maybe choose an intermediary toy for training. 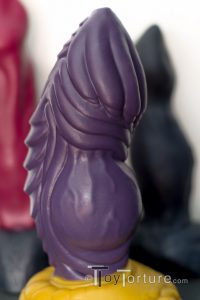 You can customize most Bad Dragon toys with different features. The most useful feature I found is the split firmness between shaft and base when choosing another firmness but hard. The hard base gives the toy more stability especially when riding it. Silicone as a material is a bit sticky so on must dry smooth surfaces a hard base in strong enough to keep the toy in place. If you really want to get a go on your toy or play in wet areas (for example your shower) most toys can be equipped with a suction cup. Another interesting feature I know only from friends’ toys is the cumtube. Bad Dragon will cast a silicone tube in the middle of the new toy. Cumtube equipped toys come with a syringe which you can fill with their (or other manufacturers) water-based (!!!) cum lube that you can shoot out of the tube into your ass. This cumtube provoked a bit of controversy in my test panel. There were guys who loved the feeling of a liquid being splashed into their ass and went on to order actually order a Bad Dragon dildo with a cumtube. On the other hand there were guys like me who didn’t feel that much or weren’t too impressed by the sensation and were more thinking about the practical aspect because a cumtube will make cleaning the toy a bit more difficult. 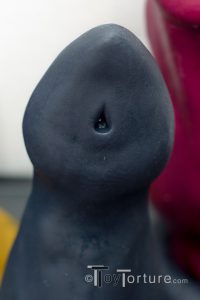 Detail of the Glans of Vergil the Drippy Dragon

Playing with the Toys 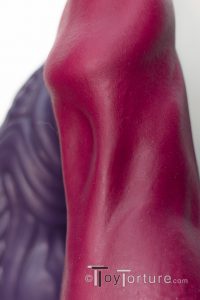 Detail of the Thick Ridges of David the Werewolf

Speaking of riding it: The overall toy is convex shaped so it follows the way most colons bend which makes riding it easy. Of cause you need a trained hole to take such diameter yet the stretching sensation when taking the second bump is very hot. A friend actually coined the term “knotting the dragon” for it.