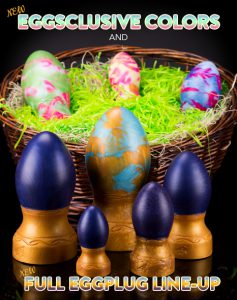 ToyTorture.com is more then you see on this website. Besides answering reader questions which toy might be right for them I am giving manufacturers feedback on their products way beyond the constructive criticism in the reviews. So when Bad Dragon introduced their Egg Plug in 2017 I was thrilled on one hand. Through their signature heavy texturing on their other toys, they can be hard to take even if you are able to take the diameter on a smooth toy. Despite some smoother toys like the Blaze (which I will review next week), Bad Dragon was always lacking a training toy for stretching the sphincter gently to take bigger toys. This gap filled the Egg Plug. 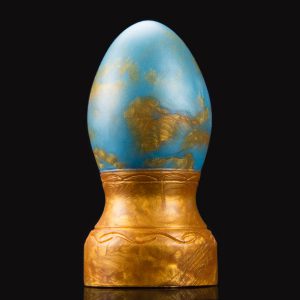 On the other hand, I was a bit disappointed. Being only available in Small (63.5mm diameter) and Medium (75mm diameter) the largest possible size was almost modest compared to the diameter of their bigger toys. And on the other side of the spectrum, the small already had a hefty size for a beginner. But this Friday, just in time for the Easter Holidays around the corner, they introduced three new sizes: Mini (4.7mm diameter), Large (96,5mm diameter) and Extra Large (106.6mm diameter). While the Mini has the perfect size for eager anal amateurs, the gap between the Medium and the Large is significant. So while in my conversations about the Egg Plug I always told the guys at Bad Dragon “Once you make it, I want the XL and if possible in Firm”, I have to do a reality check and long for a Large in Soft with Natural color and the suction cup. Though to be honest: The XL in Signature (or even better: Golden Base and fluorescent colored egg like “5th Kind”) would make a striking visual in all playrooms! 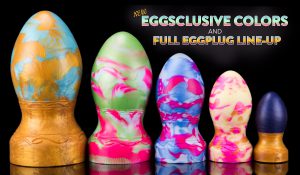 The Bad Dragon Egg Plugs from XL to Mini

The available colors are also something I really like about the Egg Plug. In the Natural and Signature color, the actual egg rests in what looks like a golden egg cup. Plug-shutting my hole with something golden is a visual which is almost too good to be true.

The Egg Plug starts out at $75 for the Mini with regular colors and no suction cup (which I highly recommend) and goes up top $215 for the XL with marbled color and a suction cup.