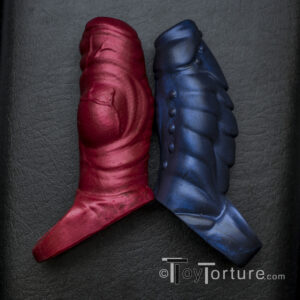 For many perverts transformation into an anthropomorphic being is a major kink. Part of coming close to their being of choice or calling is putting on gear which in a sexual content should include the dick. For that reason I have been asked a lot of times for an educated opinion on the Bad Dragon Wereables. So I got my hand on their Flint and Magnus to tell you all about it.

The construction of the two models I have tested extensively follows the design of most cock sheaths: The main body is a long sheath for covering the dick’s shaft onto which at the end a loop is molded to put around the balls for keeping the sheath in place(more on that later). The inside of the sheath is textured to massage the top’s dick while fucking, on Flint with thicker grooves while Magnus has finer ones. Unlike other cock sheaths the wall thickness is not even around the dick. Since the outside texture follows the design of some of the most iconic Bad Dragon dildos, it is sometimes thicker like on the deep ridges on Flint’s bottom or Magnus’ knot. The wereables are made out of soft silicone. So even Flint’s ridges or Magnus’ prominent veins will certainly add tantalizing sensations but will not be a difficult struggle. Due to the stretchiness, putting the sheath on is also easy, because it stretches well, even over girthier dicks. While the sheaths are made out of the same silicone as their other toys, the color choice is limited to solid colors. 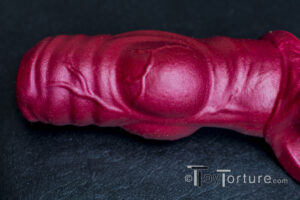 Detail of the Veins on Magnus‘ Sheath

Depending in the model the wereables are one size only or come up to three sizes. I recommend getting a size with a slightly smaller internal diameter than the diameter of your dick’s shaft for a snug fit. If you choose one of the wereables with a closed tip, make sure not to buy a too short one! I had a chance to fuck with a medium David which was too short and it was an unpleasant and unpractical experience. 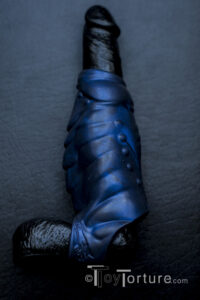 Most of my testees – both top and bottom – enjoyed playing with the wereables. The extravagant colors and sophisticated textures add an enticing visual to the play and new sensations to fucking. It takes a few rounds to figure out which texture works best in which position. Flint was more appreciated in doggy style because the ridges massage the prostate while Magnus won favors in sledgehammer fucking with the bottom on the back resp. in the sling because it really gave the knot a pop feeling. Some of my testees used the wereables without a bottom and enjoyed the sheath as small and handy travel masturbators. Especially the deeper grooves of Flint are great for that and the soft material lets you control the pressure easily.

To put the wereable on, lube up the dick, pull them over the shaft and put the scrotal loop around the balls. I recommend lubing up the sheath afterwards after it has been put in place. Otherwise adjusting the fit becomes difficult. 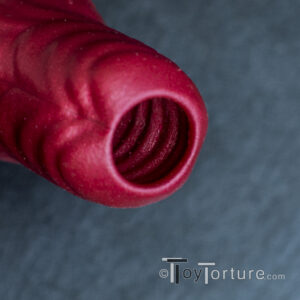 Detail of the Grooves inside Magnus‘ Sheath

As good as the soft silicone feels and allows the movement of the bottom’s sphincter to be felt by the top, it is also the drop of bitter with this toy. The loop around the balls is too soft and stretches too much. On a well lubed up shaft it moves a fair bit. On the one hand, this is good, because the groves inside the sheath massage the top’s dick. On the other hand especially when the bottom’s hole is just open enough to let the toy covered dick in, it stays inside, sliding along the dick, until the pull gets too much and pops out. With guys who don’t have low-hangers, Flint’s wide loop came off during heavy pounding. Also, Flint’s tip is so thin, it sometimes folds down when entering a hole. So I would recommend the wereables for loose holes and not to for something to start out the fucking with. 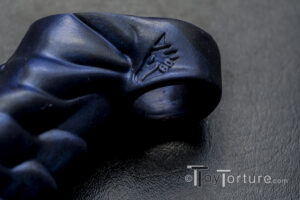 Being made out of platinum silicone, cleaning is easy: They can be autoclaved, put into hot water with dish soap or vinegar cleaner, rinsed off, dried and sanitized. But since they are silicone toys, it means they should not be used with silicone lube. Since they are so textured, I recommend a slicker lube like Elbow Grease H2O Thick Gel which stays in place.

Like all Bad Dragon toys, they are exclusively sold and made to order at the Bad Dragon website. Depending on the size they cost between $60 and $80 with no surcharge for a different color.