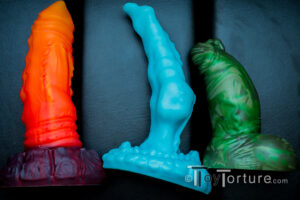 From Left to Right: Bad Dragon’s Clayton, Elden and Pearce

There a ton of options out there. The most important choice when it comes to customizing a specific toy it the firmness. There are three degrees:  Soft, medium and firm, with XL toys not available in firm. Choosing the right firmness is weighing off different aspects: Soft toys are good for not yet well trained asses or really large toys because the sphincter can deform the toy a bit to fit well. However the softer the material the less stability a toy has so especially with long toys there is a chance they will collapse easily. The firmness also determines who the texture feels. Cast in soft silicone a ridge might easily flap away while in firm the sphincter might struggle to take it. A good rule of thumb to keep in mind is, the larger the toy, the harder it will feel. In order to get an impression of the different firmness degrees, Bad Dragon sells a set of sample discs. 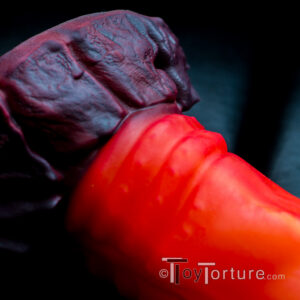 While the firmness can only be felt (or sometimes seen when a toy flips over), choosing a coloring is the most creative aspect when it comes to ordering a toy. The options are almost limitless, starting a patterns exclusive for the specific toy (called “Natural” and “Signature”) or temporary available patterns over fades and marbles to uni colors. Friends and I can spend hours discussing which color would look best on a certain toy. Due to being made out of platinum silicone, the colors will not fade or discolor.

The platinum in the term refers to the catalyst used for curing the silicone. For cheaper silicone tin is used which has all sorts of negative side effects while platinum as a noble metal is body safe and hypoallergenic. Cleaning is also easier because platinum silicone is able to withstand acid or heat. While in theory you can autoclave all Bad Dragon toys, putting them in the dish washer or throw them in hot water with dish soap also does the trick. In this case, the super smooth surface of platinum silicone makes the washing easy so they are the ideal toy to quickly clean between swapping the person taking them up the butt. For that reason toys made out of platinum silicone have replaced all my vinyl and rubber toys over the course of the last few years.

What now follows is a bit of a controversial topic. In theory, silicone toys must not be used with silicone or hybrid lubes. The silicone oil in these lubes disintegrates the silicone, making it floppy and the surface sticky. However, there are a lot of people who use high quality silicone lube on their platinum silicone toys and do not encounter any problems. My personal opinion is to err on the side of caution and not take any chances. Bad Dragon as a good reason why they only sell water-based lube. While platinum silicone is fine with any kind of water- and oil-based lube, my lube of choice for the silicone’s smooth surface are slicker, stickier lubes like Elbow Grease H2O Thick Gel or Vet Gel, especially Kerbel Gleitschleim (which is a very German think I assume). 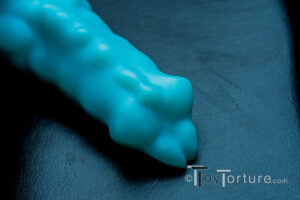 Speaking of dragon dick: As the name “Bad Dragon” already implies, their toys are inspired by anthropomorphic creatures. They started out with just dragons but now feature demons, aliens, werewolves, unicorns, octopi or real animals like horses and dogs. Being inspired by (fantasy) animals most dildos feature a knot (a bulge at the bottom of the shaft). What (almost) all toys have in common is some degree of texturing which imitate veins and scales through bumps and ridges. These elements do not only increase the diameter but also make the toy harder to take. So always take the “deepness” of the texture into consideration when looking at the maximum diameter and pondering if you can take the toy. There is a strong interaction with the firmness and texture. The firmer the silicone, the more intense the texture will be felt. This does not necessarily mean that texture is felt more intense when the toy is in firm because the flapping/ giving in on a soft toy can be more stimulation than to chafe over an unforgiving form ridge. If these textures are too intimidating but you still want the quality and lush designs of Bad Dragon, they do offer tamer toys like a natural dildo called Archer or the Egg which is perfect for training a hole to open up. 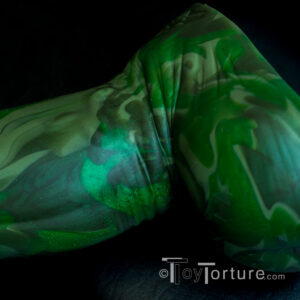 Detail of the Veins and Ridges just above Pearce’s Base 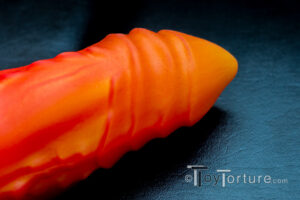 Clayton is one of the few Bad Dragon dragons which do not have a knot. The shaft stands upright rising from a big, sturdy base. This uprightness and the gradual increase of diameter makes it a good toy to start exploring depth and preparing to take longer Bad Dragons – if you can take the heavy texture.

The glans is almost cone-shaped for easy insertion. Below it are three deep ridges which especially in soft firmness massage the sphincter and seduce it to open up. The middle third of the shaft has a chain of scales on all four sides with on the back coming from there the frenulum would be are the deepest, almost saw-like, on the left and right they are very subtle. Most of my testees only noticed them when Clayton was turned inside their hole, because the front and back scales are so intense. The last third starts out with two subtle raising, yet noticeable bulges on the topside. Some testees called them “knot” but I think that is an overstatement. The bottom until the base is textured with three deep ridges, their edges being even more texture with little bumps. The ridges do not go around the shaft but have gaps on the top- and underside. Because of this when riding the entire shaft, the mid-section scales are felt more prominently. 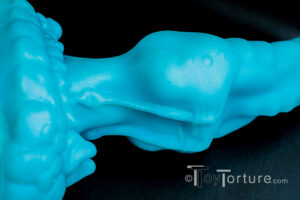 Well… Elden… A toy I have been getting many reader questions about. And the product pictures got me quickly excited about this toy. But it sadly has one big flaw that caused me to re-order a second one in a different firmness, hoping it will fix the issue.

Elden starts out with two little prongs that makes targeting the sphincter easy. Below them is the first little thickening that sets the tone for the bulges running left and right of the shaft until the knot. While the underside it smooth, there is a string of deep bumps on the upside. This heavy texture makes it a good toy to be twisted and gently fucked for maximum anus stimulation. The lower third of the shaft is the massive knot that has four tiny bumps on the sides two thin and deep strains on the upside. The knot flows into a really thin neck which ends in a large base that is heavily textured with bumps and ridges.

Theoretically, Elden has all what I love in a toy: Deep texture for stimulation and a large knot with a tiny base for maximum stretch sensation. BUT: The body of the toy is so heavy, that when being mounted onto the floor using the big suction cup, it collapses completely, making it almost impossible to ride. When fucking someone, one hand needs to hold the base, the other needs to hold and press the knot against the hole. My Elden is soft and I have already ordered one in Medium. Once I have tried that out, I will update this review. But I have also talked to the guys at Bad Dragon if they can make a split firmness with a firm base and neck (ideally additionally extending into the knot) and a body in the firmness of your choice.

4th Kind is the color of my Elden. It looks a bit subtle in the pictures but as soon it starts to glow in the dark or under UV light, the blue highlights really makes this toy pop out. 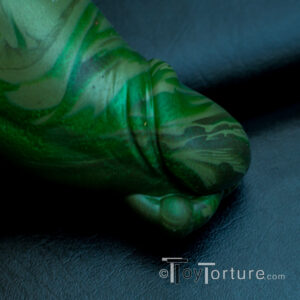 Colorwise I followed Bad Dragon’s inspiration and went for Pearce’s Signature which is a gorgeous woodland camouflage.