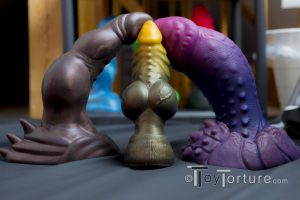 From left to Right: Nocturne, Fenrir and Crackers

Bad Dragon toys are somewhat of a phenomenon on this website. This is the forth review I am writing on their dildos (having also written about their masturbators and small sized lube applicators this year). But still, every week I get several questions about different toys I have not reviewed yet and if and when I will write about them. Initially I wanted to wait for fall to write this review to get at least a few months between the last and this review but some of you are really thirsty for a new review so I thought it would be a great toy to review before my summer break. 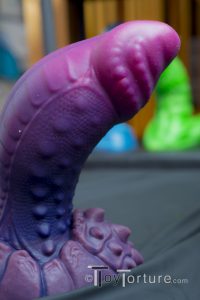 Detail of Cracker’s the Heavily Textured Glans and Shaft

Before I dive into the review, a big “Thank you!” to Bad Dragon who continuously support my blog and make these reviews possible!

The most often question I get asked when it comes to Bad Dragon toys is: “Why are they relatively expensive compared to other toys?” Besides each being handmade, the material they use is Platinum Silicone which in my opinion is the best material for anal toys. Platinum is the catalyst used to make the silicone. Being a noble metal is it hypoallergenic and doesn’t cause adverse effect inside the body like tin which is used as a catalyst for cheap silicone. Besides being body-safe, platinum silicone can withstand acid and heat. In addition to the super-smooth surface which makes it hard to bacteria to linger, Bad Dragon toys can be cleaned easily and quickly: Either put them in hot water with an acid cleaner or even auto-clave them. Being sanitized so easily, these toys are ideal when playing with multiple partners in a safe way. 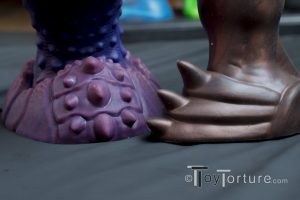 Detailf of Cracker’s and Nocturne’s Horns on the Base

Despite platinum silicone being a very resilient material, it must not been exposed to silicone lube! The silicone oil inside it will disintegrated the toy. The same basically applies to hybrid lubes. I write this warning in every review and thus have been contacted multiple times by people who have been using lubes containing silicone oil for years with their Bad Dragon toys and nothing happened. I still would err on the side of caution and use only water- or oil-based lubes. Since the surface is so smooth, I recommend using sticky water-based lube like Elbow Grease H2O Thick Gel.

The Platinum Silicone for anal toys comes in three firmness degrees: Soft, Medium and Firm,  XL toys are not being available in firm and due to collapsing too easily the Super Soft option is only available for masturbators and packers. Choosing the right firmness is weighing off different aspects: Soft toys are good for not yet well trained asses or really large toys because the sphincter can deform the toy a bit to fit well. However the softer the material the less stability a toy has so especially with long toys there is a chance they will collapse easily. The firmness also determines who the texture feels. Cast in soft silicone a ridge might easily flap away while in firm the sphincter might struggle to take it. A good rule of thumb to keep in mind is, the larger the toy, the harder it will feel. In order to get an impression of the different firmness degrees, Bad Dragon sells a set of sample discs. 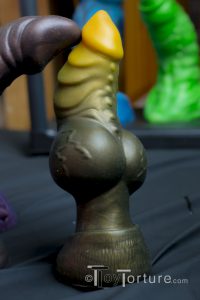 Currently Bad Dragon offers 65 different dildos and plugs. Almost all of them come in four sizes from small (like a small dick) to XL (single or double fist); some also are available in Mini. The designs are inspired by anthropomorphic beings like Dragons, Werewolves and Gryphons and some real ones like horses and dogs. Like most animal dicks they feature a knot just above the base which when ridden almost feels like getting punch-fisted. The shafts usually are heavily textured with bumps and ridges imitating veins and scales. This texture not only increases the diameter but also makes it harder to take the toys while on the plus-side stimulating the sensible nerve endings inside the sphincter. Keep this in mind when choosing the firmness! 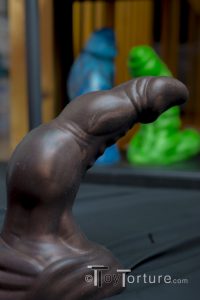 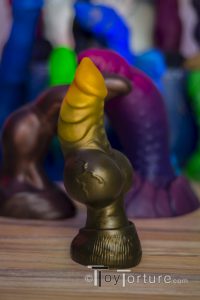 Fenrir open up the sphincter gently with a small, tapered glans. But just below it the shaft gets heavily textured with three deep ridges on both sides and string of bumps on the back. Behind this short shaft two massive spheres textured with veins form a massive knot. Between the knot and the base there is another shaft which is smaller than the one above the knot and relatively long. This makes keeping Fenrir in somewhat comfortable which the thick knot teases the prostate. Fenrir has quickly become one of my favorite toys due to the shaft being relatively short. So even if you are not depth-trained, you can experience the feeling of getting fucked by a knot. I played with Fenrir in both available firmness degrees: My friend’s is soft, mine is medium. When you have a small or tight colon, I recommend getting it in soft. The shaft above the knot bends more easily allowing it to “curl” up when the knot penetrates the sphincter.

My Fenrir is colored in Fenrir’s Signature, a fade from yellow to a dark bronze tone with golden sparkles. 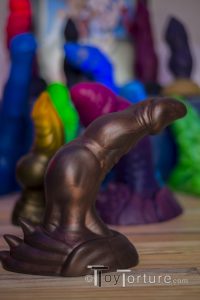 The tip of Nocturne is a long, gently tapered glans which narrows a bit just to widen again for a slightly larger knot which again narrows and widens to a considerably larger knot. The shaft is not heavily textured. Between the knots there are some very soft ridges and on the backside of the middle-knot there are two strings of very subtle bumps. Though it is heavily curved which makes navigating it inside the depth of the colon more easily. Both these properties makes it good to start exploring depth play because the smoothness makes passing the second sphincter easy.

On the base facing away from the shaft there are three horns. Depending on your colon and thus in which way Nocturne gets inserted, the can stimulate the perineum when riding it. I have been told by a female reader that they are also great for stimulating the clitoris.

My Nocturne is colored in Pearce’s Natural and made in medium firmness. I had the opportunity to try a friend’s soft Nocturne and did not really like it. Being a novice to depth play, the additional firmness supports the light (!) force when going deep where a soft would curl up. Though once more experienced and going for a more vigorous deep fucking, the soft firmness is great to enjoy the alternating stretch of the three knots without causing injuries. 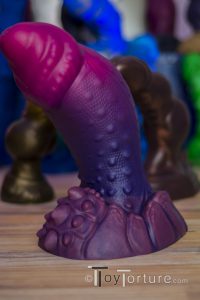 If you are into rough, tough loving, Crackers is the right toy for you! I do not say it often, but it presented a challenge to me, I have not yet mastered. The glans is massive with a relatively dull tip. It is textured with three ridges, each one increasing in depth and the lower two being textured with bumps. Below the glans there is a small, narrow “resting point” until the shaft quickly grows to a massive diameter and then tapers towards the base. The back of the shaft is textured with light ridges but the sides and the front feature bumps which raise higher the lower your get. The base is highly rugged but below the glans it features highly risen horns which depending how you take the toy, will stimulate your perineum.

Despite the soft firmness, due to the size and the texture Crackers is the most intense Bad Dragon toy I own. Due to not having a knob but just having a massive shaft, taking Crackers completely simply leaves you with a feeling of your ass being really stuffed.