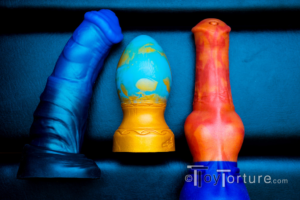 From Left to Right Bad Dragon’s Sleipnir, Egg and Tucker 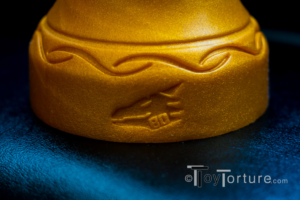 The Bad Dragon Logo Cast into the Egg’s Base

Speaking of configuration possibilities, you can choose between three degrees of firmness: Soft, medium and firm. XL toys are not available in firm and for toys which do not have to stand up like an insertable there is also the super-soft option. Choosing the right firmness is weighing off different aspects: Soft toys are good for not yet well trained asses or really large toys because the sphincter can deform the toy a bit to fit well. However the softer the material the less stability a toy has so especially with long toys there is a chance they will collapse easily. The firmness also determines who the texture feels. Cast in soft silicone a ridge might easily flap away while in firm the sphincter might struggle to take it. A good rule of thumb to keep in mind is, the larger the toy, the harder it will feel. In order to get an impression of the different firmness degrees, Bad Dragon sells a set of sample discs. 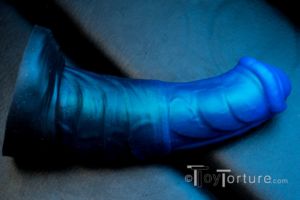 Another important element of configuring an individual Bad Dragon toy is the coloring. There are literally countless option from basic and subtle uni colors over extravagant fades and marbling to unique designs which are either designed and available only for a specific toy or available for a limited time. The colors will not fade or discolor over time which is due to the material being used.

All Bad Dragon toys are made out of platinum silicone which in the last few years replaced vinyl as my favorite anal toy material for several reasons. The platinum in the term refers to the catalyst used for curing the silicone. For cheaper silicone tin is used which has all sorts of negative side effects while platinum as a noble metal is body safe and hypoallergenic. Cleaning is also easier because platinum silicone being able to withstand acid or heat. While in theory you can autoclave all Bad Dragon toys, putting them in the dish washer or throw them in hot water with dish soap also does the trick. In this case, the super smooth surface of platinum silicone makes the washing easy so they are the ideal toy to quickly clean between swapping the person taking them up the butt. 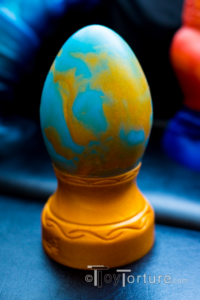 While platinum silicone can withstand a lot, do not use silicone or hybrid lubes on them! The silicone oil in them will disintegrate the silicone and ultimately the toy.  I often get messages from people who have been using their silicone toys with silicone lube and did not have any problems. But I get as many messages of desperate people who’s toys got sticky and floppy. So I recommend to be better safe than sorry. Platinum silicone is fine with any kind of water- and oil-based lube. My lube of choice for the silicone’s smooth surface are slicker, stickier lubes like Elbow Grease H2O Thick Gel or Vet Gel, especially Kerbel Gleitschleim (which is a very German thing I assume). 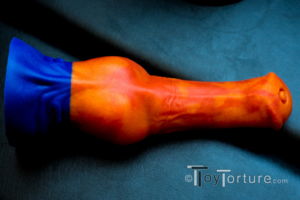 Speaking of dragon dick: As the name “Bad Dragon” already implies, their toys are inspired by anthropomorphic creatures. They started out with just dragons but now feature demons, aliens, werewolves, unicorns, octopi or real animals like horses and dogs. Being inspired by (fantasy) animals most dildos feature a knot (a bulge at the bottom of the shaft). What (almost) all toys have in common is some degree of texturing which imitate veins and scales through bumps and ridges. These elements do not only increase the diameter but also make the toy harder to take. So always take the “deepness” of the texture into consideration when looking at the maximum diameter and pondering if you can take the toy. There is a strong interaction with the firmness and texture. The firmer the silicone, the more intense the texture will be felt. This does not necessarily mean that texture is felt more intense when the toy is in firm because the flapping/ giving in on a soft toy can be more stimulation than to chafe over an unforgiving form ridge. As Bad Dragon ventured more into “mainstream” they introduced tamer toys like the Egg (see below) a Unicorn’s horn. 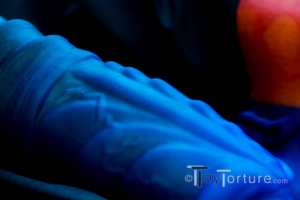 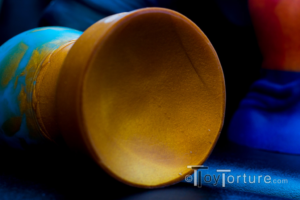 Detail of the Egg’s Suction Cup

The Egg Plug is an unspectacular plug by Bad Dragon standards: The body has roughly the oval shape of an egg and the neck and base is modeled after a golden egg cup. No ridges, no bumps, no frills at all but a thing ornament line where the “egg” meets the cup and at the top rim of the base.

While this might sound dull and actually uncreative – especially keeping in mind that there are already other manufacturer who make high quality egg shaped plugs. However, this product is the answer to many reader questions: It is the combination of a gentle ass-opening toy with the colorfulness of Bad Dragon. The smooth and round shape are perfect to pre-stretch the hole to take larger and/ or more textured toys. Especially in combination with the suction cup (which my egg has), it is ideal for riding, training the sphincter to open up. So it is a good toy for working up to a fist. Unlike its main competitor with which this toy shares a name, the Bad Dragon Egg Plug is an action toy. The large base and relatively large neck diameter compared to the maximum stretch make it difficult to wear over extended periods of time.

My Egg Plug is in the Signature color which a little custom twist: The cyan glows in the dark, making it almost a desk decoration item. 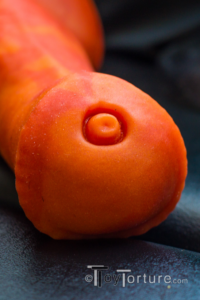 Tucker is the combination of the best of two world: A horse dick for depth and a knot for width.

Almost like the small brother of Chance Unflared Tucker starts out with a roughly dome-shaped glans which has a rim with small bumps. The glans flows quiet steeply into the shaft. The shaft is lightly textured with veins and increases slowly in diameter until at the end, there is a dog-inspired thick knot.

Especially in XL (and depending on your anatomy also in L), this design makes Tucker one of the most interesting toys in terms of “stretch” sensation: When the knot pops in, the “dull” glans also penetrates the second sphincter, causing stimulation both deep inside the body and on the anus simultaneously. Besides that, Tucker is also a good “training” toy for Chance. Being shorter and thus easier to control (to which the thick base and knot also adds), just riding the shaft until the knot, helps getting used to how to handle a horse’s glans and dick.

I chose 2nd Kind with a blue base as the color of my Tucker because I like the glow in the dark effect of it. 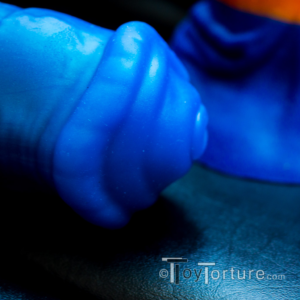 Another horse dick but completely different than Tucker! The dildo starts out with a large and dull glans. Unlike the Chance’s and Tucker’s glans it is textured with ridges which is a good preparation for the thick ridge which runs around it and which provides a steep drop to the shaft. The shaft gradually increases in diameter. The first half of the shaft is textured by three gentle scales on both sides while from the “frenulum” down a line of in size increasing bumps runs. The lower half of the shaft features a mixture of deep ridges with shallow grooves between them.

Sleipnir is heavily curved “upwards” (if it was attached to a horse) so I highly recommend getting the suction cup. Otherwise it will even more easily flip over. The curvature is a useful element because it helps the toy to go really deep in doggy while the line or small ridges stimulate the prostate. Though you do not need to go that deep. Just riding the head is enough to start with since the thick ridge around the rim is great for a prostate massage.