This is the second part of the Bondage Hardware Special. While in the first part I talked about Rope in this text will be about all the different means you can use to fetter someone if you don’t want to deal with rope.

Originally these belts were designed to secure cargo but are as equally good for securing human beings. They consist of a nylon strap which is attached to a lock through which you pull the strap in order to shorten and tighten it. Sometimes at the part of the belt where the lock is attached there is a loop through which you can attach a carabineer. You can get tension belts for fairly little money however I do not recommend getting the cheapest ones. Most of the time with cheap ones the end of the nylon strap is not welded so it starts to fray. Also more expensive ones are certified for a specific weight. When fettering a sub or using for suspension bondage I would not recommend for going anything lower than 200kg certified. While you can use tension belts on bare skin I would not recommend it. The edges of the nylon straps are sharp and the strap itself can create rope burn if the sub moves too quickly too long under them.

Another cargo securing device that can be used for bondage. They are made out of two hooks connected by a flexible cord covered in nylon fabric. Because they were designed not to secure heavy cargo you will need several bungee cords to achieve the same sense of bondage as you would with a single tension belt. However in this property lies the beauty of bungee cords. Even one single cord with produce down force that can be easily overpowered. But if you attached several ones the sub can struggle against the in his mind weak cords, maybe lift himself a bit but will ultimately fail. Theoretically you can use bungee cords for suspension bondage but I would not advise it. It is too hard to figure out how many you need in order to securely hang someone from the ceiling. Another thing to keep in mind is that the flexible cord over time will stretch and age so you have to check and replace the cords on a regular basis. 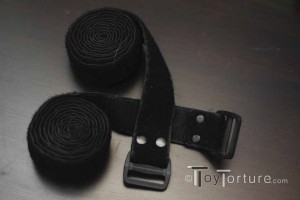 A Pair of Police Velcro Restraints

When I talk about Velcro straps I do not mean the cable binders you can buy for next to nothing at the office store but industrial grade Velcro straps that are at least 3cm wide; narrower ones cut too easily into the body. Velcro is again a great mindfuck material: It is regarded as easily to open but once you attach a long enough part of the hard side to the soft side it is impossible for a bound person to break free. You can quickly and easy secure a person quite well with Velcro straps especially when you use Velcro restraints made for the authorities. They come with a loop which makes tightening the straps easy. Doing so will require some practice because the two sides of the straps will quickly attach to each other leaving you with a twine you need to untangle first before.

Please only put the soft side onto the body (if you don’t want that extra sensation agonizing) because the hard side can create painful abrasions. Even the wider ones I would not advise to use for suspension. 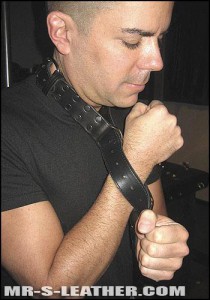 The probably most widely available secure mean of bondage in the household. It can be made out of a variety of materials so in order to test if it is made for bondage check if the edges are hard and can harm the skin. Than close the belt, hang it onto a secure anchor point and hand yourself onto it. It is doesn’t break and the claps doesn’t deform, you can use it for bondage. Otherwise you need a new belt. There are belts out there which holes all around the belt which is handy. Other belts come with added bondage features like this one from Mister B that turns into four restraints, this one from Mr S with four D-rings or their Hobble Belt which is a restraint.

Chains come in a number of varieties. The only ones I would recommend for bondage are twisted link and rolo, either in torus or in circle, patterns. Both patterns are smooth enough to be used on bare skin and offer enough space in the links to attach rope, carabineers or additional chains. Today most chains are welded instead of forged so there is a weldseam on every link. Sometimes these seams can be have sharp edges so before you use chain on bare skin check the links for such spots. 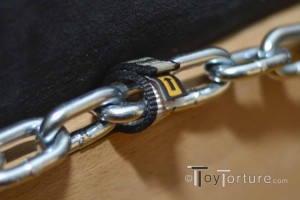 A Runner Holding a Chain in Place

Originally made for climbing these are nylon straps which are very securely sowed at the ends to create a loop. You can’t adjust the length of them. I mostly use them to create anchor points using a cow hitch. They are also good for suspension bondage if you want a similar length at all attachments points.

Another item that can be found in any household but I would only recommend softer and wider shoe laces like fat laces for bondage. Any other can cut circulation and are thus dangerous. Also: Most shoe laces are not designed to withstand too much force so I would not recommend using them for any bondage where much resistance is anticipated but they are great for genital bondage.

When you watch movies tape seems to be the bondage material of choice for thugs these days. And to a certain extend you can use tape for bondage however I would not advise it. First of all getting the tape of when there is body hair under it can be quite painful. It also takes some practice to wrap it right: Too tight and it will cut circulation, too loose and you can easily get out. Also, most glues used on tape, like the iconic duct tape, is water-soluble. So it the sub sweats too much or if you attempt to do a tape gag which is often seen in movies you are at a loss.

These problems do not occur with saran wrap. However you need several layers to make it strong enough to withstand some struggle. If you want to use these means for bondage I would recommend doing a saran wrap base layer and add tape to that. When choosing the saran wrap be careful what you buy. There is wrap that shrinks which requires special surveillance of the sub when you use it, especially for mummification!

In the next part of this series called “Connection Hardware” I will talk about the nifty little things which connect different bondage means without knots.