In the first two parts of this Bondage Hardware Special I presented to you means how to attach subs to themselves, each other or furniture. This article is about all the hardware you can use to connect different means. This hardware is especially useful when using Rope Substitutes I talked about last week because unlike rope in most cases you can’t simply tie a knot to connect two or more straps. 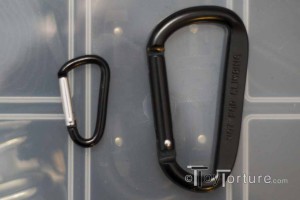 The breaking load is important for liability reasons. If you use uncertified equipment and something happens it is possible that your insurance will not cover for you. Most of the time a breaking load is certified for a specific piece of connection hardware but it states explicitly on the packaging that it is not made for supporting humans. This is a legal grey zone: Yes, theoretically insurance companies can deny your claim if something happens because the hardware was not certified for human usage but I have never heard of such a case.

Carabiners are probably the most often used piece of connection hardware. They are a wire bend into roughly oval or triangular shape with a gate to open it. Usually a spring keeps the gate closed if you don’t apply pressure. They are made out of stainless steel, steel, aluminum, titanium, carbon fiber, composite and plastic.

Carabiners come in many different forms which sadly are not all made for human bondage. 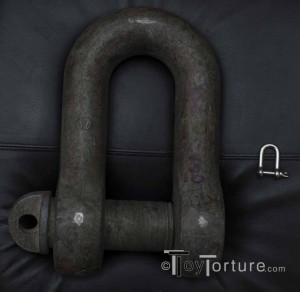 Another piece of nautical hardware very well fitted for bondage. Shackles are made out of stainless steel wires which are bend either in ¾ of a circle or two parallel straights with a half circle at the end. On the other end there is a pin which is screwed into a threat closing the shackle. Theoretically a shackle can do the same things as a carabiner but through having to twist in order to close it I find it more practical when I want to connect two things more permanently or when an eyelet is too small.

An even more permanent connection are screw links. They are made out of metal wires and come in oval or triangular shapes. On one side is a sheath with a thread on one end. If you unscrew the sheath it will open a recess. Originally designed to connect two ends of a chain it can also be used to create additionally attachment points, extend a chain or enlarge a too small eyelet.

While theoretically they are able to connect a D-ring to a chain p.e. I would not recommend using pad locks are connection hardware. In most cases the lock will turn that the force pulls on the body and the shackle. Pad locks with not designed to have physical stress in this position so it is likely that the mechanic inside will jam and you will need a bolt cutter to open the lock!

If you buy locks in order to close lockable bondage gear make sure to buy keyed alike locks! Nothing is more stressful when you need to urgently open a lock and can’t find the key. You can get keyed alike locks at every hardware or lock store. When I suggested getting keyed alike locks to some reader questions people were concerned if that would disclose them as perverts. I can assure you this won’t be the case. Asking for keyed alike locks is quite common for example for equipment lockers in gyms. 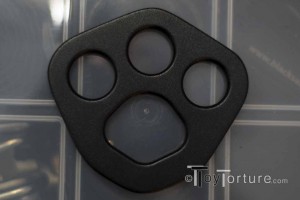 Rigging plates is another piece of professional climbing equipment used to organize and attach different ropes together. They are plates made out of aluminum and sometimes out of stainless steel with holes for ropes. The most common form is the paw with a big hole and three to six smaller ones on top. But tor really elaborate designes you can get rigging plates with more than 20 holes. I use them for organizing my carabiners for suspension bondage so I just need to pull up the plate. A more profane usage scenario is attaching carabiners for a hogtie.

There are large stainless steel rings sometimes with a cross or a triscele in the middle out there called rope rings which fulfill the same purpose though with less organization. If you just want to create a hogtie or don’t want to suspend someone from the ring a stainless steel cockring also does the trick.

An easy and disposable item for connecting bondage equipment are zip ties. They are plastic bands with a lock on one end and texture on the other end. Pull the textured end through the lock and the connection can’t be opened again. If you get professional ones you can get a breaking load up to 80kg per zip tie. So it only takes three or four to create a strong connection, but please bear in mind that the combined strength is lower than the individual strength added up.

There are versions out there that can be opened up and reused. They are not strong enough for bondage purposes. The same applies to Velcro cable ties! 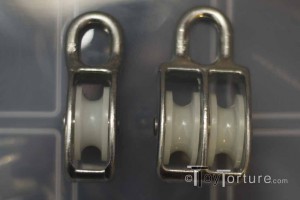 A Hoist for one or two Ropes

Not really connection hardware but since I don’t know where to put it else and I store mine along with my carabiners I will shortly talk about hoists here. Hoists are barrels mounted into a case with an eyelet on top. They are certified for being able to bear different amounts of maximum weight. Hoists are useful for suspension bondage: You can create the bondage while the sub lies securely on the floor and later pull him up. There are different types of hoists with up to six barrels. I made the experience than more than three barrels are not practical because the rope will tangle.

So much about gear and hardware to tie people up. Next week will be all about accessories that can be useful to make a bondage scene successful and as little messy as possible.