Welcome to the fourth part of the Bondage Hardware Special. This article will be about all the things you might not necessarily think off when you plan a bondage scene. Yet there are many scenarios where these things are nifty or even essential.ToyTorture.com has always been a website offering advice and information for people just starting out in the scene. So for the experienced player many things might be standard dungeon equipment and thus are trivial bunt since I wanted to give an overview about all things I consider important please bear with me. You might find something you have not though off yet.

Especially when bondage aficionados think about scenes the scenario can’t be too strict and inescapable. As tempting as this scenario is especially when it comes to gags it has a safety risk because the sub can’t articulate a safe word anymore. One way to get around this is giving him something to hold onto that he can drop if he needs to articulate a concern. This can be a juggling ball or a bell if the top wants also an acoustic alert.

I know that this is kind of a crutch because in some scenarios like sleepsacks or straightjackets an object can’t be hold and focusing on holding onto something might keep a sub from really going under into the headspace. But especially when playing with new kinksters just starting to venture deeper into heavier bondage I find an additional safety line a good way to establish trust and confidence. 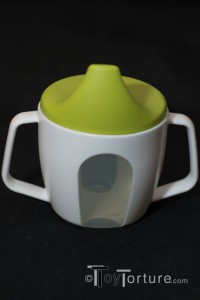 A Sippy Cup from IKEA

Especially when it comes to stress or heavy gear bondage people subs tend to sweat a lot so it is important to stay hydrated. Being in a bondage predicament however limits the possibility to drink properly. The sub either spills the liquid or the water flows into his mouth too quickly making him choke. I found sippy cups like the ones used in retirement homes or nurseries a good and secure way to provide the sub with water. I have experimented with drinking straws but was not too impressed.

Everything that goes into the body has to leave it at some point of time. Especially when it comes to long term bondage this might pose a problem because when nature’s urges call you are not able to get out of the bondage in time or you don’t want to.

Another body fluid that can cause problems is sweat. Again a problem with long term or gear bondage (particularly rubber gear) sweat can leak out of the gear which is especially annoying when you are playing on the bed you want to sleep in later.

This article was about nifty but not necessarily crucial objects. Next week will be about security hardware which I consider a must!