After publishing my review of the Basis of the VAST Breathing System (link to review), I have gotten a couple of questions if the Capsule Injector also works with other breath play setups. In short, yes of course. For the long answer and because if you connect it directly to a gas mask you need to follow a little piece of advice, I decided give this toy a separate review.

The center of the Capsule Injector is a small 3D printed t-piece. On one side a 6l rubber breathing bag is attached, opposite of it a 50mm long gas mask hose ends in a GM40 port. Perpendicular to these things a black anodized aluminum cartridge holder for standard kitchen usage N2O cartridges is attached. 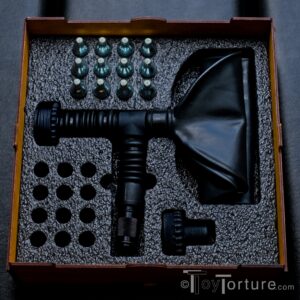 The Packaging of the Capsule Injector (comes without cartridges)

The toy comes in a beautiful heat-embossed wooden box outfitted with cut-out foam to house the toy. There are also holes for 24 cartridges so you can store them along the toy. Along with the toy itself comes a GM40 screw-on adaptor for attaching the Capsule Injector to 20mm professional breathing system tubes used in hospitals for example.

Playing with the Capsule Injector

Just by itself the Capsule Injector works as a standard 6l re-breathing bag. Of course this only works in a closed system in which you breathe in and out of the same port. Most gas masks have separate inlets and outlets which are sealed by back pressure valves. So in order to use a re-breathing bag, you need to modify them. For the most common gas mask types like the UDSSR GP-5 (commonly known as the “Russian gas mask”), AVON S10 or FM12 you can easily find guides online. 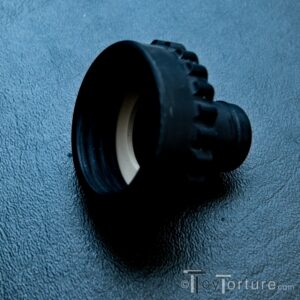 This closed-circuit breathing is also a necessity for N2O play. It gets absorbed quite slowly so it needs to rebreathed several times. Working with the capsules originally designed to power kitchen whipping siphons is usually a bit cumbersome. The Capsule Injector makes it very easy: You unscrew the bottom of the cartridge holder, put the cartridge in, screw it tightly and the gas gets released. 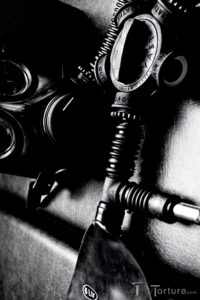 The Capsule Injector attached to a FM12 by a VAST Rebreather

If you are attaching the Capsule Injector directly to the gas mask or use a setup without a valve between the injector and the breathing mask, a word of warning: The pressure inside the capsule is quite high and once opened it will rush inside the bag, the tubes and also the breathing mask. This sudden increase in pressure can damage the lungs. So when popping the capsule, the bottoms mouth should be shut and he should be exhaling through his nose. This is not an optimal method but at least a bit safer. A slightly less expensive valve alternative to the VAST Rebreather (for example if you want to play with a modified Russian gas mask which currently does not work with the Rebreather) is the VAST Breathing Switch for 129€. With this you can simply switch between clean air and the Capsule Injector so all the capsule pressure goes into the bag from where it can be rebreathed safely. 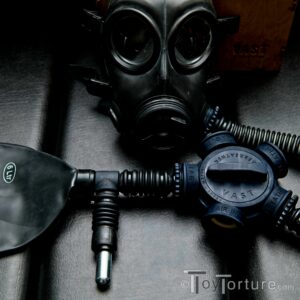 A common point of criticism in the messages post the review was that the breathing bag is firmly connected to the cartridge holder instead of using a GM40 port. That way the 6l rebreathing bag could be exchanged for a smaller rebreathing bag. The 6l bag is actually necessary because one N2O capsule holds about 6l of gas. Smaller volumes would increase the pressure inside the system (see above). So when playing with N2O you are kind of stuck with 6l. If you want smaller bags, you have to pre-fill them externally where the access gas can escape before attaching the bag to the setup directly which again is a cumbersome process.