Christmas is over and after being stuffed with good food and (some more, some less) having enjoyed the company of our relatives most of us are heading home today. Some back to the gym in order to prepare for Full Fetish in London or to look good for the New Year’s Eve (Play) Party. Some might even already be thinking about New Year Resolutions for 2016.

Maybe because of that the time around Christmas is the period of the year where I get asked most about chastity device. I guess some of you want to become better boys next year in order to escape Santa’s naughty list in 2016. The question which chastity belt is right for whom is a quite complex one yet important because the devices are quite expensive investments. 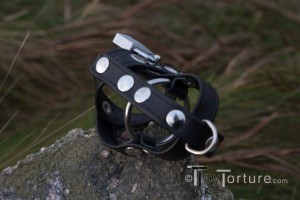 When I went to HML in early December to try out some toys for the upcoming Heavy Bondage Special the guys handed me their new leather chastity harness. Being made out of leather it is soft and doesn’t leave a too big print even through thin cloth dress pants. It is also flexible thus comfortable to wear. Due to the stressful pre-Christmas period I haven’t had a chance to try it out extensively but I somehow fear that my new boy friend has already some evil thoughts. You will be able to read an extensive review in the Heavy Bondage Special sometime in March. But for only 79.95€ it is on the less expensive side of chastity devices and thus a great way to get used to have “something” permanently around your dick.