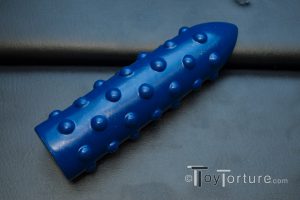 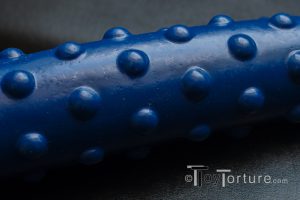 Detail of the Bumps 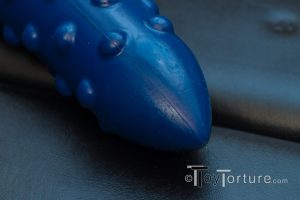 Detail of the Tapered Tip

While the play with the Rough Rider is great, the handling is difficult. Especially with the small and somewhat the medium size, the length to diameter ration is too far off to allow the dildo to stand up on its own which makes it hard to ride. A  suction cup or even a wider base would have been nice, especially since the small version in a length realm where the entire toy could be swallowed whole. The lack of a base is also problematic when topping with the toy. With the perfectly circular shaft and except the bumps no texture, it is actually hard to hold on to the toy with lubey hands. Again, a base would have been nice. There is a Truncheon version of the Rough Rider, which adds a grip and a crossguard-style stop at the end of the insertable part. But it features fewer bumps which are all in line so there stimulation is less intense. 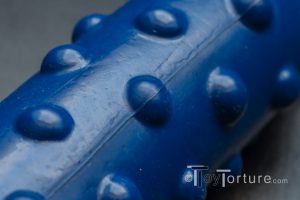 Detail of the Joint Running Around the Toy