The usual disclaimer before you look at pictures: Silicon attracts dust like nothing. I washed all toys before the shooting, dried them with a micro fiber cloth. Then my telephone rang and well… so please excuse the lint and little spots. That is just letting silicon toys linger for half an hour. 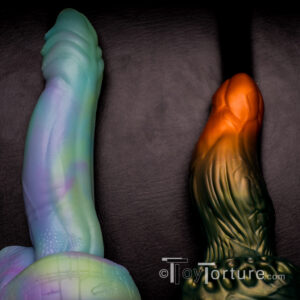 I guess the most distinct thing about Bad Dragons toys is what they do with the platinum silicone they use to cast their toys. You can choose between three degrees of firmness (except for their largest toys which are only available in soft and medium) for free. The firmer the toys, the more distinct the texture is felt. Though compared to other “firm” platinum silicone toys of other manufacturers, the Bad Dragon firm is still relatively soft so even hard playing is relatively injury safe. Colorwise you get the largest selection of all manufacturers out there: Each toy has a unique “Natural” and “Signature” color pattern only available on that toy in addition to a few dozen elaborate colors patters, some available permanently, some only for a few weeks or even events. These patterns include my beloved glow in the dark colors which l look really hot in dimmed playroom after having been charged with light. To keep up to date on the special colors, I recommend subscribing to their Twitter feed or e-mail newsletter. And then of course there are the 56 solid colors to choose from which you can combine as fades or marbles leaving you way over 6,000 combination possibilities to toy around with. Since there is a configurator on bad-dragon.com for each toy, you really can configure your anal toy like you would with a car. 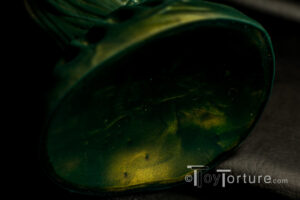 Detail of the Suction Cup inside Demogoron’s Base

Both toys I am looking at today – the Demogorgon and the Votan – can be equipped with two special features. First, there is the suction cup which turns the flat bottom of the base into a concave dome. So when you press the toy onto a flat surface like a shower wall it sticks to it. I have this feature on all Bad Dragon toys where it is possible. It simply makes playing on your own easier, especially when you are into riding the toys. Also, I find grabbing the suction cup’s edge a bit easier when fucking a bottom with the toy. The second feature is the cum tube. For this, a clear tube is cast in the middle of the toy with an opening where the urethra would be and about two feet of tube coming out of the bottom. Onto this tube you can put the syringe the toy comes with to push cum lube into your rectum when fucking yourself. Some of my testees love this feature, I just find it hard to clean and the sensation not worth the work. My recommendation is asking a friend who has a toy with this feature to try it out or get their Lil’Squirts for a first try before you invest serious money into your dream toy.

Like all Bad Dragon toys, Votan and Demogorgon are inspired by fantasy creatures. Demogorgon was inspired… well… by a Demogorgon. Being classically trained, I first thought the name referred to the demon in Milton’s “Paradise Lost”, but my testees soon pointed me to Stranger Thing’s which I never have watched. Since in both media, no dick is show, I believe the truth lays somewhere in the middle. 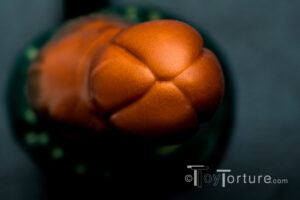 For the Votan the guys at Bad Dragon took the Allosaurus as inspiration, one of the largest carnivore predators that ever roamed this planet. And I have to say, they succeeded in transferring the aggressiveness of a predator with the size or a large dinosaur. The tip of the toy is actually very easy to take because it has a smooth cone-shape. But after a quarter of the glans three thick ridges texture the surface. And to add to the stimulation, the sides of these ridges are textured with shallow but noticeable bumps. Once you have taken the glans, there is a long shaft to ride. It has almost no texture, just some very slight veins and a very soft ventral groove. The overall diameter increases very slowly and slightly before ending in a large, bulky scale textured base. 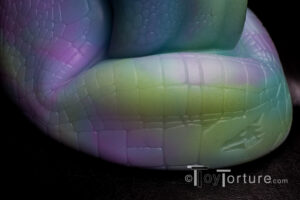 Detail of the Bad Dragon Logo Embossed into Votan’s Base

Playing with the Demogorgon & Votan

I am reviewing these two toys because I have been getting reader questions to review “softer” toys from Bad Dragon, specifically asking for these two. And the two delivery on that promise – at least somehow. 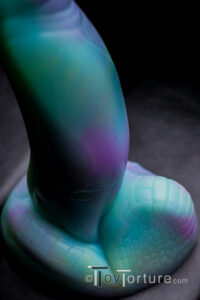 Detail of Votan’s long and smooth Shaft and Massive Base

Calling for Votan’s review as a “soft” toy was probably the misconception of my readers. They just saw a long dildo with a tapered glans and thought it would be an easier depth toy than Stan. Oh well… Yes, the first quarter of the glans goes in easily. But the following ridges are intense and especially in firm nothing for novice – but quite something for the texture lover. Just fucking the anus and maybe a bit deeper for stimulating the prostate with it, twisting it inside the hole for the little bumps to take full effect, is fun and intense experience. This intenseness multiplies when you go deep with the XL or even with the large one depending on your anatomy. It is true, the smooth shaft is great for depth play. But before you can ride it, the serious glans must make it through the second sphincter which even for my most depth-savvy testees was a challenge. A hot one they admitted afterwards but feeling the ridges and bumps navigating through their colon was a new experience, making it harder to relax in order to take the toy deep. Comparing that experience to taking the blunt-tipped Chance Unflared they rated the Votan even more extreme. That doesn’t make the Votan a bad toy, quite the opposite: Through the combination of a challenging head and a long smooth shaft, the toy is currently unique and an enticing challenge for the depth player. But if you care looking for a toy to start exploring depth, you might want to look for a smoother toy. 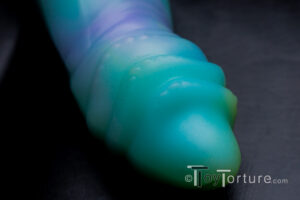