The Doxy Die Cast House in its Case

The head is conically shaped and has a diameter of 61mm and length of 74mm. It is covered by a medical grade silicone cover. A 25mm long shaft connects the head with the body which is made out of a die cast aluminum-titanium alloy which comes in classic black, purple, red, white and silver. There is even a 24k gold plated version. The surface is highly polished for a smooth and lush finish. The body is 240mm long and tapers from 48mm to 22mm with a little bulge just below the end for a comfortable and secure grip. In the lower half of the body there are three soft-touch buttons for power, increasing and decreasing speed. At the bottom there is a 3m long power cord attached which ends in a power supply unit. Its plug can be exchanged with an easy yet secure mechanism. You can purchase fitting adapters which is handy when travelling abroad with the Doxy. The Die Cast comes in a handy carrying case which makes is perfect for keeping the wand from bouncing around in a suitcase when travelling. Due to being made out of metal the Doxy Die Cast weighs 680g without the power supply.

The Doxy has two setting: Just pressing the power button will turn the vibrations on and the intensity is adjusted by pressing the plus and minus buttons. If you press the power button for three seconds the pulse setting is activated. The vibrations than escalate from the lowest to the highest intensity for which the speed is controlled with the plus and minus buttons. 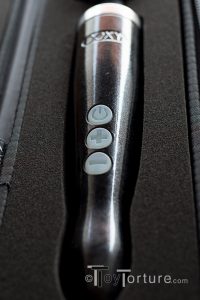 Detail of the Buttons

Playing with the Doxy

First things first: The Doxy is the most powerful massager out there. I compared it to the original Hitachi Magic Wand and found the Doxy’s vibrations stronger and going deeper. On paper the Doxy “only” manages between 3.000 and 9.000 rpm. Other, less expensive massagers can go higher, up to 18.000 rpm. But this is not what counts but the power delivered. And on this matter the Doxy absolutely shines.

The most often used purpose of a massager is obviously edging and milking. Depending on the effect either focus on the glans, especially the frenulum (for milking), or the shaft, the balls and especially when you are edging with your hand the perineum. On the glans the different speed settings do not really matter. Even the lowest setting will push most uncut guys over the edge pretty soon. On the other body parts finding the right setting can mean the difference between “I’m going to cum.” and “PLEASE! Let me FINALLY get released!” If you want to use lube for better edging I recommend not too slick water-based lube. I use Swiss Navy for it. Using silicone lube will disintegrate the head cover!

For milking head attachments are great. The Doxy’s head is slightly larger than the 57mm diameter most other massager have. So putting on attachments is a bit more difficult. However through the conical shape of the head the fit very well and are actually more secured when it comes to heavy stroking than on other wands. 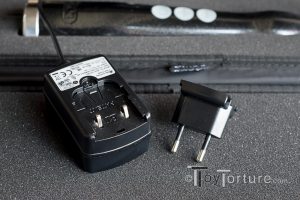 Detail of the Interchangable Plugs on the Power Supply Unit

Beyond CBT the massager is good for intensifying existing toys. Most toys – like clamps or ball stretchers – lose their sensation infliction potential after some time because the nerves get numb. So adding a bit of vibration there can wake the nerves up. Since unlike other wands the Doxy’s head cover is stiff so you don’t have to take it off; all the vibrations’ power get transmitted directly. Due to the high power the Doxy works well with ass toys. Depending on the effect either try it on firm ones like the metal plugs from E-Stim for the intense, almost shattering vibrations. Softer ones like from Square Peg will make the hole buzz. Depending on the shape and position of the toy the vibrations get transmitted onto the prostate which drives most bottoms nuts in a good way. If the bottom has a well trained hole you can even put the head into the sphincter but be careful to not let the hole swallow the entire head!

Through its power the Doxy finally delivers on the “massage” promises of its name. The strong vibrations can give a real deep tissue/ muscle massage and help relax tense muscles. Thus one testee actually uses the Doxy for post-scene therapy. He hands it to his sub after a long flogging to help dealing with his muscle stress or uses it to bring back live into a sub’s limbs after stress bondage. Doxy’s founder once said in an interview that the wand can be used to clear the sinuses by putting it onto the forehead. I tried it and it worked decently. However due to the strong vibrations I am not sure if I would recommend doing it because I fear it could cause concussions.