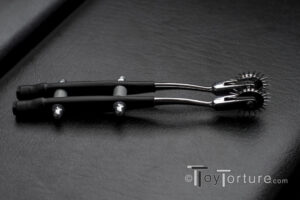 It’s been over five years since I reviewed E-Stim Systems’ Monopole Pinwheel. Since then I have been reader questions about the Duo Pinwheel. I thought such a review would be unnecessary because it is just a duopole version but since apparently there is a demand for the review and your wish is my command, here it is.

The basis of this toy are two standard pinwheels with added e-stim functionality. The are 180mm long and the wheels have a diameter of 32mm. For connection to your e-stim box a 4mm banana jack is solidly soldered onto the top of each individual pinwheel. A shrinking hose has been put over the body of the wheel so you can safely grip it. The two pinwheels are connected using machine screws with acorn nuts on both sides, creating a gap of 10mm between the wheels’ bodies. Around the screws and between the two pinwheels are polymer spacers. Also the washers are made out of plastic, so both pinwheels are completely isolated. 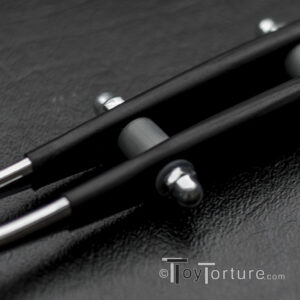 Detail of the Spacers

Playing with the Duo Pinwheel

In the Monopole’s review, as always when it comes to E-Stim I warned about currency running over the chest because it can be fatal. The Duo Pinwheel solves this problem. Because both poles are only 15mm apart, the chances of currency not taking the shortest way between both (which is usually the one of lowest resistance) are very very slim. So as long as both poles of the Duo Pinwheel are connected to the same channel of a power box with isolated channels (like the E-Stim Systems 2b or Pebble), the pinwheel can be used all over the body, even the nipples!

Even though, the mass and covered surface area doubles in size compared to the Monopole version, the e-stim sensation does not change much. Regardless of the power box or the program, the sensation will always be a stingy one. It feels like little needle pricks. Though the power level determines whether they are tantalizing or excruciating. 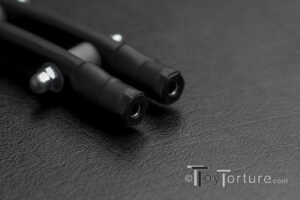 Detail of the Two Banana Jacks

The non-electric pinwheel sensation is a bit different from the Monopole. Since two wheels are now touching the skin, the nerve input is stronger and delicate feelings like tickling are almost impossible to create. The sensation is a light to medium stingy pain which does not break the skin. On the other hand, the sturdier, handier build of the Duo Pinwheel allow for more pressure to be applied without it breaking away when running over the sub’s body. So it finally delivers the sensation most people expect when they see a pinwheel. This comes at a bit of a price because the elegant curving over the sub’s body is kind of hard to achieve with both wheels touching the skin.