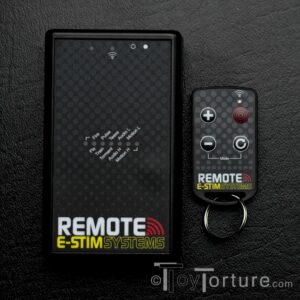 In 2010 E-Stim Systems introduced the Series 1 Remote (now called Classic Remote to avoid confusion), their first remotely controlled e-stim power box which was quite the crowd pleaser. In 2020, with 10 years of technological advances, they introduced their new Remote. So let’s find out what a decade of progress has yielded.

On a first glance, not much has changed on the outside. It is still a rectangular box made out of quality, sturdy black polymer which measuring 111x68x28mm (respectively 34mm if you take the depth of the belt clip on the back into account) is slightly larger than the Classic Remote. The panel at the front side features one 3.5mm socket on the left and the power switch on the right. Behind the power switch the microphone is located. Another input method is the new motion sensor. 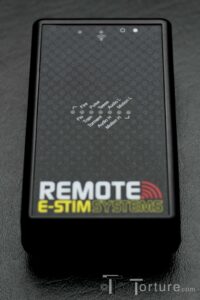 Detail of the LED Panel

The upper side features the same graphic grey dot design and colored logo of all “modern” E-Stim Systems power boxes like the Pebble. On top of this panel there are two LEDs: The left flashes when the box is firing, the right with the wireless logo lights up when the box receives signals from the remote. In the panel middle there is a line of seven LEDs which are dual-used. Firstly, the five center LEDS indicate which program is selected through a flash pattern (see below). Secondly, the seven LEDs are the indicator for the for the 27 power levels using different flash patterns for each LED: First flashing slow, then medium, then fast until it stays on. The box is powered by a standard 9V block battery which’s compartment is on the bottom. So if the battery runs out of power you can replace it easily and quickly during the scene.

The box is entirely controlled via a small remote control measuring 59.5x33x8.5mm, featuring a key ring at the bottom and the same graphic, modern design like the power box on top. On the top left corner there is a green LED that flashes when the remote transmits. To control the power box, there are four buttons. In the left there is a “Plus” and a “Minus” button for controlling the power level. On the right on top is the “Fire” button; at the bottom is a circular arrow. Pressing this button and the “Minus” button simultaneously triggers the program selection. You can now cycle through the programs with the “Plus” and “Minus” buttons and select it with the circular arrow button. 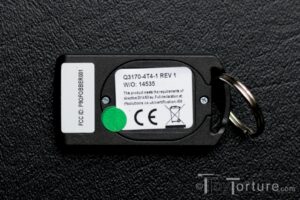 Detail of the Screwed Battery Compartment of the Remote Control

Replacing the remote control’s battery is a bit of a pain in the ass because you need a very small screw driver to open the battery compartment. Even with extensive usage I did not manage to deplete the battery so I guess this will not be necessary too often. 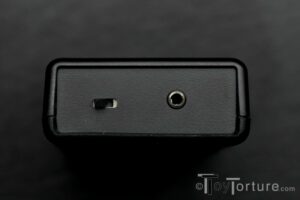 Detail of the Remote’s Top Panel with 3.5mm Jack and Power Switch

Like all E-Stim Systems Premium Products the Remote has a lifetime warranty if you register it at their website. Again, like all of their power boxes it comes in a black carrying case lined with foam. If you cut the foam a bit on your own, there is plenty of space for some basic electrodes. Out of the box the Remote comes with a quick start guide , a battery, 4 pad electrodes and one 3.5mm jack to 2mm pin plug leads. While I can understand the choice so you can out of the box connect the box to the pad electrode it is still a bit annoying because most E-Stim Systems electrodes are laid out for 4mm banana plugs (for more detailed information of the carrying case’s content, read my unboxing).

Playing with the Remote Power Box

When you turn on the box, there is a 3 second self-test during which the seven LEDs in the middle light up after each other. If the battery is low, only the first LED flashes. The Remote always boots to no program and power level zero. So you first need to select your program and then the power level to start the stimulation. 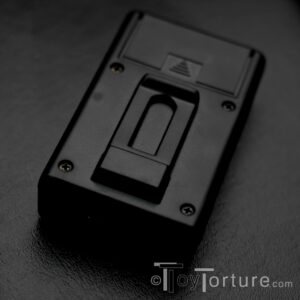 Detail of the Belt Clip

The Remote uses a digital processor to create the wave patterns. This is where you can probably see the biggest improvement over the last 10 years. While old digital boxes produced “edged” output compared to the seamless analogue ones, the Remote’s programs are smooth. That being said, the sensation can of course be mean and stingy, depending on the power level and the adjustment. While 28 power levels might not sound much, the maximum output level has significantly increased over the Classic Remote and should be enough for most e-stim players. Of course, the steps between the individual levels can be challenging. So especially when playing with a novice be cautious when you increase the sensitivity. 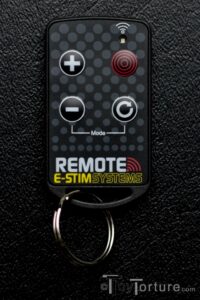 Detail of the Remote’s Control

The programs echo the main purpose of the box: Controlling your sub remotely. The box misses classic “pleasurable” programs like Wave or Milk mostly used on fettered subs. Instead it focuses on bringing the sub’s attention to the top or tormenting him. Like almost all build-in microphones of e-stim units it is not that great and sensitive. So if you want to use the audio feature, place the power switch directly in front of the audio source for a good and detailed input. On the other hand, the motion sensor is VERY sensitive! The devious (sadistic) mind will probably soon find many ways to create feedback loops or bring the sub in precarious situation when the belt clip is attached to a freely moving object like a harness’ d-ring.

E-Stim Systems claims the radio range of the remote control is 100m. In order to test it I took a sub to a running track on a sunny day and managed 97m range. Factors like walls (and what they are made out of), people, battery strength and even humidity will impact the range! So at large events or when sitting to far away from your playroom, consider moving closer to your sub when he does not react as expected.

In the end, all things considered – especially the functionality of the “Fire” button -, the Remote is a bit more of a sadist’s toy who want to train the sub instead of a pleasure device.