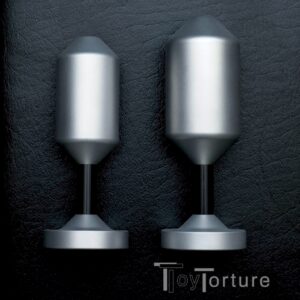 A little bit over 4 ½ years ago I reviewed the original version of Mr S’ Electrified World’s Most Comfortable Butt Plug. Mr S discontinued the original model some time again – both the electrified one (probably because there have been problems with lead fractures) and “analog” one. In March 2019 a new all-silicone version was introduced, leaving e-stim lovers twitching bit unsatisfied. Luckily half a year later Mr S Leather proudly presented E-Stim Systems as the manufacturer of an all new Electrified World’s Most Comfortable Butt Plug or short E-WMCBP 2.0. Being a big fan of E-Stim Systems’ premium electrodes and having to live up to a massive legacy, I was very excited for this review! Let’s see how the E-WMCBP 2.0 performs.

As the name already states the E-WMCBP 2.0 is an insertable electrode and like almost all premium E-Stim Systems ones a bi-polar one, meaning you don’t need another electrode to enjoy the sensation. Like its brothers it is made out of aircraft grade aluminum which is treated with E-Stim Systems’ “new” matt finished, giving it a slik-like look and feel. 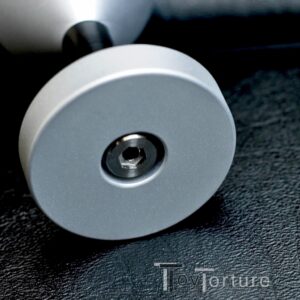 Detail of the Screw and Banana Jack for the Body

The basic form follows the one of the original World’s Most Comfortable Butt Plug: The body starts out cone-shaped with a dull tip followed by a barrel-shaped middle section which about 60% of the overall body length until it tapers again into a cone-shaped bottom. The transition from sloped cone to straight barrel is softly rounded and thus a bit more comfortable than on the original toy.

Like all E-Stim Systems premium electrodes now follows a neck made out of a black polymer which 28mm long and has a diameter of 11mm. This houses and isolates (together with a small white polymer washer) the stainless steel screw from the base. At the bottom of the screw there is not only a 4mm banana jacket but also a 2mm deep hex key socket.

The base is a disc with 50mm diameter and 11mm height. The middle is slightly tapering towards the neck and softly flows into the disc’s surface. On base’s side there is another hole for a 4mm banana plug, turning the disc into the second pole.

The E-WMCBP 2.0 comes in two sizes. Both sizes share the base but the body is significantly different. 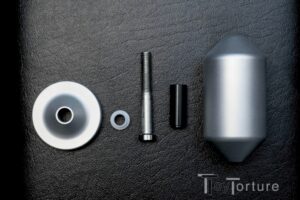 Being an e-stim plug, let’s see how the E-WMCBP 2.0 performs in that regard. Being offering a large mass and surface, this electrifiable butt plug provides very smooth and pleasurable sensations to start out with. Though depending on the box, program and power level naturally can turn into a stingy beasty. The relatively large and thick base compared to other E-Stim Systems’ insterables makes the sensation even a tad bit softer than other plugs. Due to the top-down-pole-distribution this plug is perfect for the often sought getting-fucked sensation wave-shaped programs provide.

All the points more or less also applied to the original design. The greatest different is the mechanical and thus handling aspect of the new plug. The most important difference is the stiff neck that connects the base with the body. Being rigid there is a leverage effect, especially when being outside and walking. In combination with the heavy and voluminous body this lead to interesting sensation inside the rectum, particularly when the head hits the prostate. 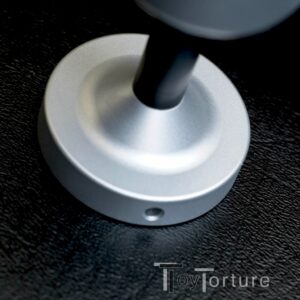 Detail of the Base with the Banana Jack and Tapering Center

My testee panel was split on judging this effect. Some enjoyed the added stimulation, other said that WMCBP lost a bit of its charm and USP of being comfortable, even almost unnoticeable wearable over hours without the flexible connection. I have never been a fan of long-term plug wearing so I cannot tip the scales. So when you have to replace a possible broken original Electrified Worlds Most Comfortable Butt Plug keep in mind that the wearing sensation can be very different. Since the neck is longer and thinner than on all other E-Stim Systems’ electrodes, the sphincter closes up more, so through the leverage this event is intensified when the anus twitched from the stimulation. As an added bonus the thinner and longer neck lowered the risk of the plug falling out when being out and about. This effect is supported by the different base design. The original base had a flat surface that was connected by a 45° edge to the sides. So a relatively large, flat surface was pressing against the anus, having some leverage effect. It is surprising, but the little tapering middle section makes for an enormously more comfortable, almost ergonomic wearing experience, compensating a bit the negative effect of the solid neck. 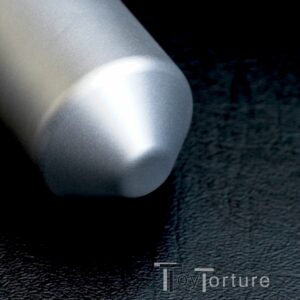 Detail of the Tapered Body with Blunt Tip

The stiff neck has another advantage. The original plug was a nightmare to push through the sphincter once lubed the toy. The body became slippery and gripping the base did not provide any help at all. With the rigid connection, even after lubing up the base serves as a comfortable handle. Speaking of insertion: Being made completely out of metal and polymer, in theory you can now use silicone lube with the E-WMCBP 2.0 – but only if you use it without e-stim stimulation. Silicone lube is an isolator. If you want sizzling e-stim fun, only use water-based lube (Specific e-stim lube is not necessary in most cases. Personally I use Swiss Navy Waterbased for e-stim).

Following the E-Stim Systems’ standard design for premium insertables, the E-WMCBP 2.0 addresses two of my major points of criticism on the original toy: Where on the legacy version lead fractures was a constant threat, the E-WMCBP 2.0 is virtually indestructible. Also cleaning is a jiffy: Unscrew the body from the base, take all elements apart and wash in hot dish-soap water, dry, sanitize, done.