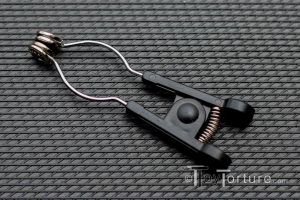 Every time when the E-Stim Special is on one of the most things I get asked about is e-stim on the nipple. But since almost all clamps offered are monopolar I strongly discouraged using them above the waist in order not to interfere with the heart. I got so annoyed with the lack of adequate bipolar clamps that I build some myself with copper electrodes which wasn’t ideal either. So I was very excited when I discovered this clamp by ElectraStim which they sent me to test thoroughly.

As the name of the toy suggests the general design follows the one of a rather large clamp with an overall length of 103mm. 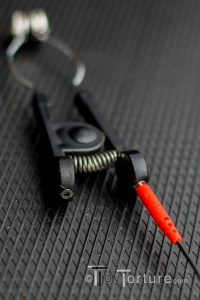 Detail of the 2mm Socket

The bottom half of the clamp are two handles made out of a black polymer connected by a hinge. Below the hinge is the spring which pushes the tips together. The bottom of each handle is a large, slightly domed area for better grip at which bottom the socket for 2mm plugs is located. The top half is made out of flexible yet sturdy wire. The tips are round and slightly domed with a diameter of 12mm. With standard ElectraStim leads attached the maximum aperture of the clamp is 38mm.

Playing with the Bi-Polar Clamp

Despite the little amount of mass and the small contact area the clamps can produce a quite smooth sensation making it a suitable toy for beginners who are not into sharp and stingy pain. 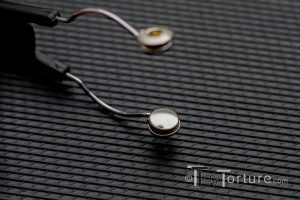 As written above this clamp is bipolar so the currency flows between the two tips of each half making it safe to use on the nipples. But through the wide aperture this clamp is quite versatile. Besides the obvious nipples I used the clamps to fry balls or place if in the glans with one electrode on the frenulum to milk and e-stim orgasm out of the subs. The most fun I had was attaching the clamp to body parts otherwise not exposed to e-stim because the sensation is most surprising to the sub. Tormenting the nasal septum with excruciating pain will bring most subs to their knees and ultimately to tears. On the other side of the sensation spectrum a light tingling program on the ear lobes is a great addition to elaborate sensation play. 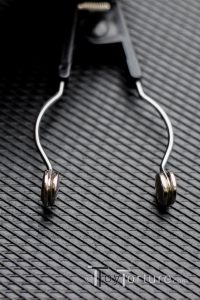 Maximal Aperture of the Clamp

The stiffness of the spring is relatively low and the tip is smooth and round which makes this clamp comfortable to wear over long periods of time. The downside of this is that if you can to attach the clamp to small body parts like the male nipple, it will slip off very easily, especially when the sub moves around through the induced sensation. I got around this problem by attaching the clamps perpendicularly to the body and put a cloth pin on top of the ElectraStim clamp. It is important to use a cloth pin which is not made out of metal otherwise you will short circuit your power box!  Alternatively wrap an elastic band several times just below the tip of the clamp. 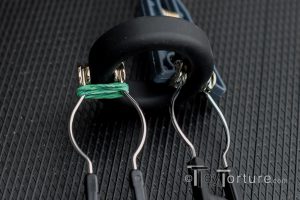 It is imperative that when you use a clamp on each nipple that the power box has two completely isolated channels and use one channel per clamp. Otherwise the might be interaction between the two clamps which can lead to currency flowing between the nipples which than ultimately can cause heart problems.