The Classic Plug is a bi-polar plug made by ElectraStim. It is cone-shaped and comes in three sizes. 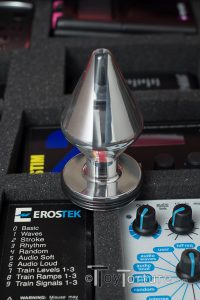 Unlike the bi-polar anal electrodes made by E-Stim Systems the two poles are split horizontally, with the ElectraStim Classic Plug they are split vertically. Two polished tapered aluminum halves are connected using acrylic which isolates the two poles. The junction is very well-made with almost no burr so unlike other, cheap electrodes which mimic this style there is not injury risk when inserting the electrode. Around the base two rubber bands are wrapped which provide good grip even with lubey fingers. Theoretically they provide some level of isolation when inserting the plug or taking it out even when currency is running through the plug. However, first I strongly advise against moving the plug while e-stim is one because the alteration of the contact surface can lead to nasty spikes in the felt stimulation. Also when you really grip the base, the fingers will make contact with the aluminum, making it likely currency will flow through your fingers. If you still want to pull or push the plug while it is energized, wear isolating gloves.

To connect the plug with your power box there is a socket for 2mm pin connectors at the bottom of each pole. 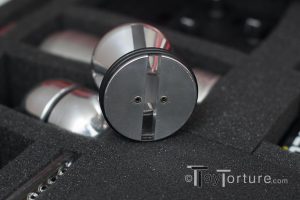 Detail of the Two 2mm Sockets

While I have gotten the Maxi to review, the construction and handling of the toy are the same for all three sizes. Due to the smaller amount of mass in the sensations when playing can feel a bit different.

Playing with the Classic Plug

The shape of the Classic Plug is the same like most traditional butt plugs which means it gradually opens up the sphincter which makes for easy insertion. To ensure good conductivity I recommend water-based lube. I personally prefer Swiss Navy which has good conductive properties.

Because the two poles are facing each other instead of being above each other Classic Plug offers unique sensations compared to my other bi-polar e-stim plugs. The bad news first: Naturally due to the poles’ position there is no fucking sensation possible. When I started reviewing the plug I went through all the programs on my wide selection of e-stim power boxes. Some of my favorite ones I did not like at all, others I never considered to be fun suddenly became interesting. So when you have gotten only E-Stim System Premium Anal Electrodes, take a look at this one for more varied play options. 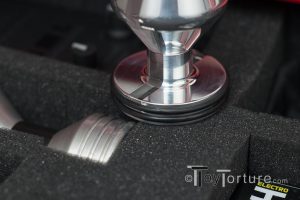 Detail of the Isolation Rings Around the Base

Another good news is: All the sensation felt is just centered at the sphincter which leads to an intense stimulation. Even at low intensity settings, strong sensations can be felt. So this plug is good for nuanced play as well as for more tormenting scenes. An e-stim sadist friend of mine grew very fond of the small plug because it gave his sub who maxed all his power boxes a new challenge.

However, what spoils the plug a bit for me is the lack of 2mm pin low profile leads. I searched the internet and could not find any. So sitting on the plug is not possible, lying on it is a bit of a challenge, both will increase the likelihood of lead fracture which limits the bondage layouts I really want to incorporate this electrode in.