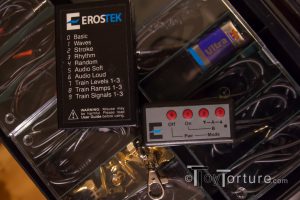 This power box is quite small measuring only 96mm x 61mm x 26mm. It is made out of sturdy black plastic which has an abrasive surface but on the top for better grip. On top the program numbers with the corresponding names are printed with fluorescent ink so after letting the device sit in light a bit you can read which program is which number even in the dark. On the bottom there is the battery compartment for 9V block batteries. All important functions are found at the front of the box. There are the two 3.5mm jackets with channel A on the far left and channel b on the far right. Left from the middle is a double digit nine-segment display with red LEDs, right from it is mono microphone and the power button.

This power box is controlled using a small remote control which measures 72mm x 34mm x 14mm. It features a small carabineer on the lower left corner so you can attach it to a lanyard. In order to exchange the battery you have to unscrew the bottom of the remote control. On the top there are four buttons numbered 0 to 3. Under each button it says what the button does resp. what holding button 0 or 1 down and pressing 2 and 3 will do. On the far right side of the remote there is another red LED which flashed when you press a button.

The box comes with a detailed instruction book and two 3.5mm to 4mm banana plug leads.

As with all E-Stim boxes the sensation experience by the sub depends on a number of factors like which electrode is used where on the body. So the description of the individual programs can only be a rough one.

With this box you can only select a program for both channels. There is no way to select a different program for channel A and channel B. When playing for extended periods of time the box will shut down if it hasn’t received a command in 30 minutes resp. 120 minutes if in one of the training modes (number 7 to 9). So especially in long term scenes regularly increase the stimulation a bit. This is also good general advice because the nerves adjust to the stimulation so a constant stimulation level is felt less intense over time. 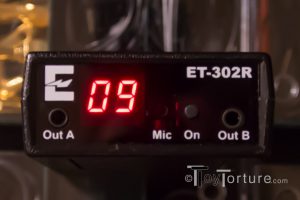 When I first got this box I have to admit the way of controlling it scared me a bit with double and triple function keys. Being more of a bottom who in a nutshell has to explain a potential top how the device works I was a bit discouraged. However As already written the control layout is printed on the remote control and after having used the box four times I knew intuitively which button to press for what. The red LED display works great in all environments with when starting telling the battery level and the corresponding left or right bottom LED flashing when a channel is firing.

This box is even smaller than the ET232 I reviewed last year so it is even better for travelling. The drawback is that you can’t manipulate the programs so you are basically stuck with the stimulation that comes out of the box (don’t get me wrong! The stimulation the box delivers is awesome!). But what this box lacks in adjustability it wins in flexibility being remote controlled. On an open field the range of the remote control is approx. 30m, inside a building depending on the number and material of walls up to 15m.
Having the controls detached from the box creates a big mindfuck. The sub never knows when the stimulation will kick in and in what intensity. So many scenarios are possible: From the sub laying bound alone in the playroom to going shopping when suddenly the e-stim kicks in and the sub has to get a hold of himself. The latter scenario works especially well with the training programs. I know numerous masters who trained their slaves to perform different tasks depending on which signal is fired. Complete remote control though takes a bit of mental effort at the side of the top who needs to know in which program he was on which level in order to operate the box without the display. Yet again, with a bit of training this works really well.
Especially when visiting big events or play parties I highly recommend changing the channel on the box (How to do this is very well described in the manual). Most people don’t bother to do so and I have heard of cheeky people walking around at big events like IML with their remote set to the standard and pressing buttons hoping a box in a training mode on their frequency is waiting for a command… 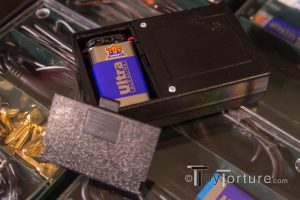 The fact sheet says that the ET320R has 60 micro coulombs per pulse versus the ET312b which has 80 micro coulombs per pulse. Of cause when it comes to stimulation more is always better but the small box is definitely powerful enough to make you cum, scream or beg for more.  Speaking of fact sheets: I have talked to people who have owned their boxes for nearly a decade and being an electronic device it will sooner or later have some issues. They have ensured me that with a little technical knowledge and talent this box is easy to repair; the manufacturer ErosTek has recently launched a spare part section on their website to it can now be repaired with original parts. However: I have to strongly urge you to only let a true electrical engineering expert repair this box because malfunctions can cause serious harm or at best unintended and unwanted unpleasant stimulation!

Finally a word of warning for people wanting to order it inside the EU: All Erostek devices I have seen so far are lacking the CE marking which is a requirement for a device being sold in the EU. Several friends of mine had their Erostek device being confiscated by custom officers in several different countries when ordered directly from the USA. Best and safest way to get an Erostek device into the EU is either ordering it through Regulation in London or purchase it when visiting a country outside the EU and bring it with you personally (even though theoretically it can be confiscated by custom at the air port).