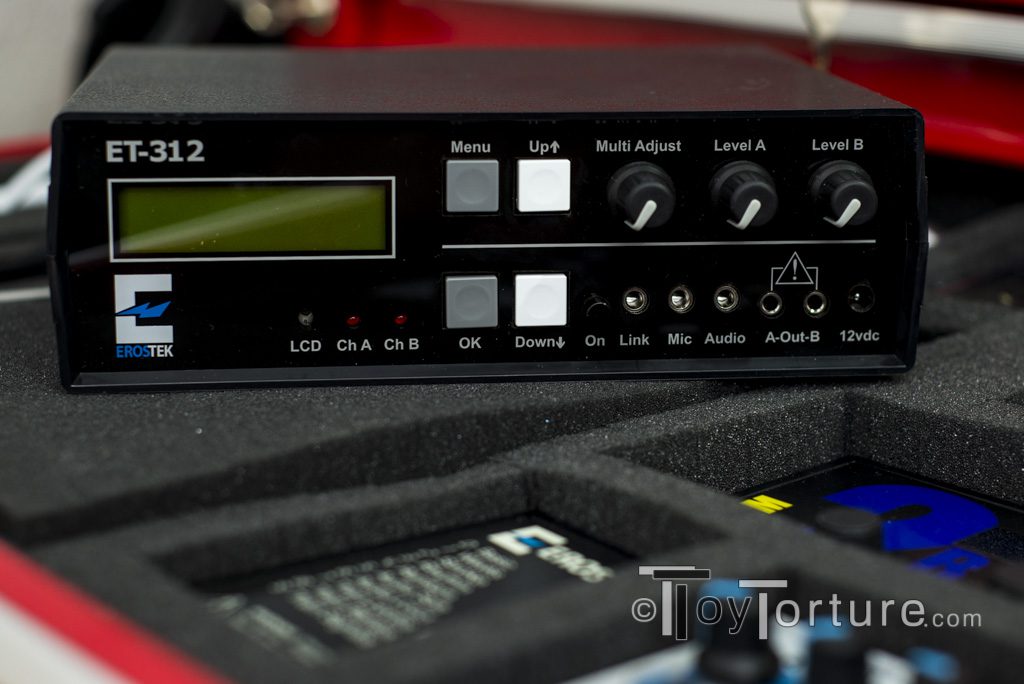 Since the ET312b is sometimes considered not to be compliant with EU electronic device regulations, if shipping it to the EU I highly recommend ordering it from Regulation. I had several friends’ boxes ordered from the USA seized by customs.

The Erostek ET312b is probably one of the oldest e-stim power boxes which is still on the market. Its design has almost become iconic, the characteristic beige box having been featured on so many porn pics over the last decades – until Erostek changes the design a few years ago to a more stylish black. This design change lead to some discussion in my testee panel. Some – like me – prefer the new look because it fits the style of most playrooms and scene atmospheres. Other likes that the old box popped out and is indeed a classic. If you have an old box and want the new look, there is a kit to exchange the case – or do it the Trikoot way and use alkyd based paint to color the case in your signature color. The case has a rough texture which forgives finger prints while the control panel is still glossy. The box measures 205x157x65mm making is the largest of the e-stim power boxes. This is largely due to the lead acid battery which has a capacity of up to 48h. But which also makes the box with a weight 1.200g making it the heaviest box on the market. When the battery gets old, it can be replaced with a little bit of electro technical know-how but unlike the other boxes which are powered by 9v block batteries, if it runs out mid-scene in a club you can’t replace the battery instantly but have to use the power supply unit. Generally speaking, Erostek sales almost everything as spare parts. So if something gets broken and you are handy, you can fix it yourself. 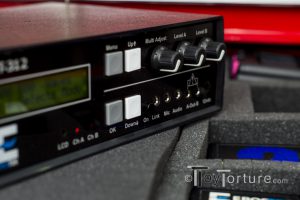 Detail of the Control Panel

The entire front of the box is taken up by the control panel. The left third is for display information. On top there is a two-line green backlight LCD. Below it there is a hole through which you can adjust the screen’s contrast using a fine screw-driver (which is only necessary in extreme weather conditions) and two red LEDs which flash when channel A and/or B is firing. In the middle there are the main control buttons. The first horizontal pair are the grey buttons Menu and ok. Pressing Menu will get you to the advanced setting (see below) and OK will select the currently displayed menu point. Next to them are white buttons labeled Up and Down. In the menu they are used for navigating. Outside the menu, they are used to scroll through the box’s programs. Next to the Up key there are three rotary controls. The first is “Multi Adjust” to manipulate the current program, the other two are controlling the power level of channel A and B. Below the three knobs there is the power button which starts up the box, the link jack for connecting the ET312b with a computer, 3.5mm jack line-ins for the microphone and another one labeled “Audio”. I have tried the microphone and music on both jacks and got the same effects so I am not sure why there are two. Theoretically the mic should create very faint sensations when plugged into Audio but I did not experience that. Next are the two 3.5mm outputs for channel A and B and last the input for the power supply unit. 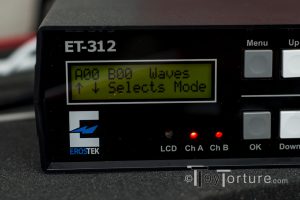 Detail of the Display

The ET312b comes with a few accessories: The power supply with adaptors for USA, EU and Canada, two 1.2cm long 3.5mm jack to 4mm banana plug leads, a 2m long line-in cable to connect you phone or MP3 player with the power box, a microphone with a 2.4m long cable and holdfast with a small glue patch to permanently position it somewhere in your playroom (though the holdfast is so flimsy and the glue to weak, I use adhesive tape to position and fix the mic in a suitable position for each scene) and an informative manual. What the ET312b doesn’t come with – unlike most other modern premium e-stim boxes – is a nice carrying case.

The ET312b is used like every other box. After pressing the power button a 3 second self-test is run after which the battery’s power level is displayed. After that connect the leads to the electrodes, connect them to the box, select a program and slowly turn the channel’s intensity up until the sub starts to feel someting.  The ET312b has 18 resp. 24 different programs. The last 6 programs are custom once which can be transferred onto the box using the ErosLink software. After selecting a new program there is a short ramping up period. This is to prevent too intense stimulation for the case the power level has not been turned down before the change. This is necessary because every program feels differently intense on the same power output level. The sensation of the programs can be adjusted by turning the Multi Adjust knob.

With an output of 80 micro coulombs per pulse the ET312b is the most powerful unit in the market. Through the powerful battery it delivers this output regardless if running on battery or using the external power supply. While most subs do not really need the full power on most boxes, if you are having a real pain pig over, having the extra power in the backhand without having to change the electrodes is good.

Just like the E-Stim Systems 2b, the ET312b supports tri-phasing. This means using a special cable the stimulation can be felt at three areas using only a two channels. Since for this kind of stimulation there is an interaction between all three poles, never use it above the waist! 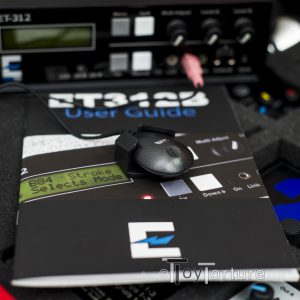 The Microphone which comes with the ET312b

What sets the ET3212b apart from all other power boxes currently available on the market are the advanced features which you can access through the menu button. These features can be used to customize the power box to your personal preferences like:

As already mentioned Erostek also sells soft- and hardware to program the ET312b. Through the Eroslink software you can write new programs, alter existing programs also on the fly or choose from 25 new programs to fill the six “hidden” program slots in the menu. I have never used the software myself but tried it at a friend for a short time. While it is powerful, you need a lot of understanding how e-stim works (or trying out a lot on the fly) to really develop new routines. And while the interface is functional, it looks very Windows 95 – which explains why the connection to the box is done via a serial port… Especially if you look for remote control over the internet, take a look at the E-Stim System 2b.

Last but not least: Because the ET312b has been on the market for so long and through the advanced features is considered a “pro box” (even though most people probably will never use the features), sooner or later most e-stim enthusiasts will buy one of these boxes. These makes the ET312b the ideal choice for subs who host traveling tops because it is likely that the top will already know how to use the power box without an introduction.