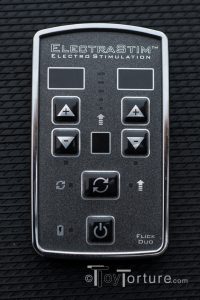 The Flick Duo is one of the smallest e-stim power boxes out there. It measures 96x57x16mm. The case is made out of a high quality polymer. The bottom is black with a satinlike feeling while the control panel has a grainy texture and is surrounded by a little bit raised silver frame. The top half of the control panel is symmetrically laid out: There are raised buttons soft buttons with a nice pressure point labeled plus and minus to control the intensity of the two channels. The current selected intensity can be seen on a digital display above the controls. Below the controls are orange LEDs which are on when the channel is firing. Between the two channel controls are four green and one red LED which display the intensity of the kinetic recognized by the power box.  Below this scale there is a digital display which indicates which program is currently selected. The lower half of the control panel has two buttons. The upper one is for cycling through the programs. When the green LED left to it is on you are cycling through the 8 regular programs. When you hold the program selection button for approx. 5 seconds the right LEDs goes on which means you can now cycle through the 4 flick programs. When changing modes please keep in mind that holding down the button will cycle one program further in normal mode until the mode change takes place. The lowest button is the power bottom. Next to it is a red LED which comes on when the battery level is low. 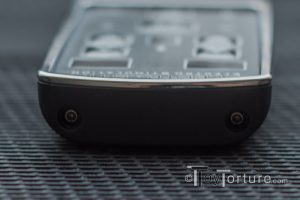 Detail of the Two 2mm Sockets

There are only three sockets on this power box: Two 2mm output sockets for the two channels and a Mini-USB socket at the bottom. If you want to use 3.5mm plug leads ElectraStim offers adaptors for 12€.

The small form factor is partly due to the build in battery which lasts between 4 and 6 hour of play depending on the intensity. This feature was heavily discussed among my testees. Personally I prefer power boxes which uses 9V block batteries (also known as PP3). I usually carry around a bunch of them at an even so when one gets empty I can replace them easily or take a battery out of another box. For the Flick Duo I theoretically have to carry a power bank. But the small form factor was really appreciated by some testees (especially the ones who are not like me and travel with a ton of electrodes) saying it is a very discreet power box which can easily be stored away during public play for example. Once the Flick Duo ran out of power you can use the provided Mini-USB cable to charge it which takes approx. 3h. 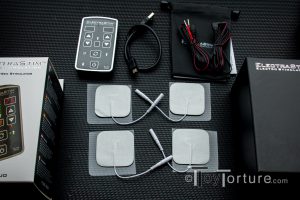 The Flick Duo comes in a nice black box along with a detailed manual, two leads, four pad electrodes, a Mini USB charging cable and a drawsting storage bag (For detailed pictures take a look at my unboxing).

After pressing the program selection button for 5 seconds you switch into Flick mode which offers you four programs. 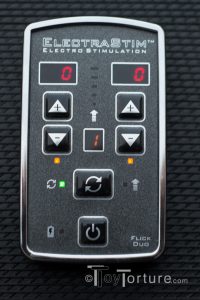 The ElectraStim Flick Duo turned on in normal mode

In Flick mode the box will fire when exposed to up-and-down motion. I would describe the sensitivity as medium. I attached the Flick Duo to my wrist when jerking off and REALLY had to beat the meat in order to feel something. Generally speaking you really have to concentrate in which way to move the box in which intensity to get the desired effect which at least in my case took way too much mental effort to jerk off properly. So instead of a self pleasure enhancer the Flick Duo is a sophisticated pain play tool. Attaching it to the top’s wrist (and the leads along the body which enough slack for him to move around!) when flogging or spanking adds a new dimension and range of sensation to impact play. The Flick mode can also be used a bit like the audio input on other boxes: But instead of putting the mic in front of the sub’s mouth so he has to control himself in order to make the stimulation stop with the Flick Duo the sub has to be tied standing up with the above his head and some degree of being able to move his feet to “work” sensations out. Now hang the Flick Duo from his balls and attach electrodes either to his junk or if you are really evil use pad electrodes on the soles’ of his feet. Kick the dangling box to get it started and watch him jump around trying to cope with the stimulation which inevitably creates more stimulation.