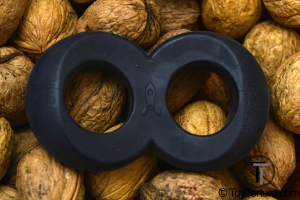 The Cosmic Ring is shaped like an eight. Both ends are 20mm thick and the material gets thinner to 7mm in the middle onto which Zizi rocket logo is wrought. Both holes have a diameter of 26mm. Being made out of TPR the holes can be stretched to accommodate even quite large dicks yet fit snug enough even for smaller dicks and smaller or tighter balls. Another benefit of TPR is, that it is resistant towards body fluids and most lube so even out of a sleazy group scene where silicone-based, water-based and fat-based lubes mixed it came out in top shape.

Even though it looks quite different than the Oxballs Trough I had the same question when I got this toy from Mister B: What am I supposed to do with this toy? But after playing around with it a couple of times it became a regular in my play. 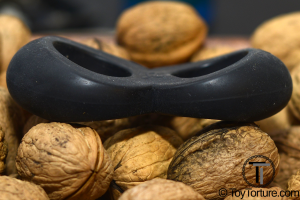 Side view showing the difference in thickness between the ends and the middle bridge.

The stretchiness makes the Cosmic Ring also a versatile cock toy: Take both rings and wear it either as a cockring or a ball stretcher. Because one side of the package is 40mm high and the other one only 7mm depending which side you put in front of it either pushes your dick up or down and will let your ball bounce more freely or encourages slapping against your thighs when jerking off. Due to the bulges in either of the three configurations the separation between a silicone loop around the base of the junk and the balls is large and stable enough without having to short-circuit your box when the sub wiggles. 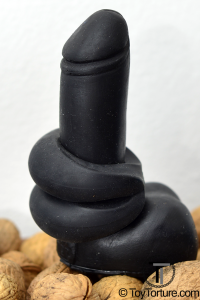 Example of doubling up the Cosmic Ring

This is extremely handy since not everyone has as low hangers as I have thus making the Zizi Megamen or Oxballs Nuttsling too uncomfortable in the first place. On the other hand: If you have really low hangers and the Nuttlsing or Megamen is too short, due to the relatively large additional stretch the Cosmic Ring helps make cockslings even interesting for people who otherwise wouldn’t feel any stretch at all.

A weird form of play I have witness at a group scene: The connection of people. Some just put one ring around one dick and the other around another one. One transferred the stroking sensation onto the balls of another and I found a couple who was into docking (putting your glans under the foreskin of another person) and they put the holes behind their glans thus pumping them up a bit. I have to admit I don’t get this form of play but was glad to see them getting pleasure from the Cosmic Ring. This scene also dissipated some doubts if the rather frail looking bridge between the holes would withstand the tension which it did. I still wouldn’t put too much stress onto it too often. But then this toy isn’t too expensive if it breaks.