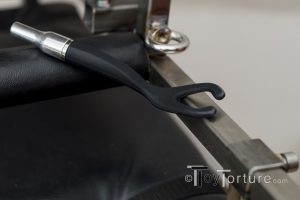 Like all violet wand attachments the rear end is made out of metal to connect the electrode with the want itself. Its round plug measures 23x11mm which is the standard for most modern violet wands. There are some out there which have a different socket size so if you don’t have the NeonWand from KinkLab (which I reviewed here), double check if it is the right size.

Unlike most other violet wand attachments, the conductive part is not made out of glass but conductive silicone. So it is flexible and does not break easily. Over the length of 55mm it tapers and arches a bit back before opening up to the 55mm long head. There the silicone is only 7mm thick so it is very flexible. The head is approx. 30° angular to the shaft which allows for precise targeting during play without the power unit getting into way. After 20mm the head splits into to 35mm long prongs which have slightly curved forward ends. The space between the prongs’ end is 7.5mm. 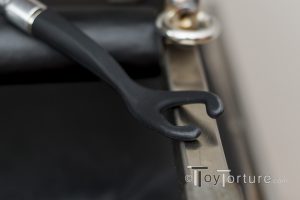 Detail of the Head with the Gap between the Prongs

Playing with the Flex Capacitor

Before I got the Flex Capacitor I had been playing with Violet Wands for almost half a decade but just with glass electrodes. Through the different material properties of silicone it greatly enriched my play. First, there is the possibility to press a large area of the electrode against the skin. While the small lightning between the electrode and the body has a pinching sensation, pressing the entire head against the skin creates a buzzing sensation – which depending on the power level can certainly be agonizing. Simply running the prong tips over the skin almost feels like a wartenberg wheel being used.

Of course when you lift the electrode off the skin, the lightning occurs again. Like all electricity, it takes the shortest way. When you bring both prongs parallel to the body, both ends emit a lightning. This can be incorporated into play when through slightly twisting the violet wand the lightning jumps from one end to the other. Sadly through the curved ends there is no way to bring the entire head completely parallel to the body to create a “lightning circle”. Yet the small tip size of the individual prongs makes them great for precise targeting. 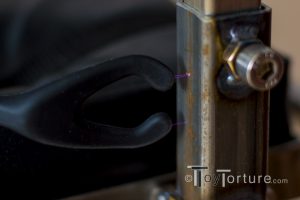 Detail of the Lightning emited from the Electrode

The gap between the prongs opens up a world of new play possibilities: “Grabbing” body parts with lightning. My testees most often circled around nipples, teased foreskin when still covering the glans or the frenulum when after exposing the glans. While this is good fun the gap could be considerably larger for example to fit an entire dick or just the glans between the prongs. Moving up and down the shaft would probably make for an interesting experience!

Last but not least, there is a practical aspect: Most modern violet wands do not have moving parts anymore which makes them usable for travel. But with the electrodes being made out of glass, even in well-padded cases I was always afraid to take mine on the road. But since silicone does not have this issue, I actually have been taking mine to scenes and play parties quite often since I have gotten the Flex Capacitor.