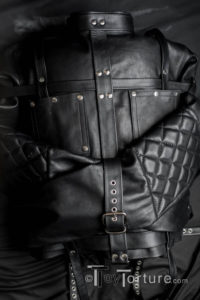 One of the most common questions in the realm of heavy bondage is: Where do I get a good, reasonably priced straitjacket? Despite most heavy bondage items like sleepsacks or straitjackets are once-in-a-life-time purchases, not everybody can afford the mid-four-digit price tags of Mr S or Fetters straitjackets. On the other end of the price spectrum there are cheaply made models from Asia which cardboard-like leather from questionable sources and unreliable metal fixtures. So I did some research for something in between and found this model from HML Fetish in Bremen. 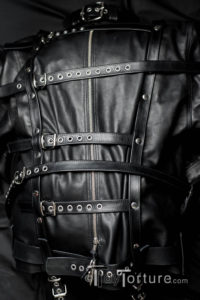 Detail of the Straps for Tightening the Straitjacket at the Back

Since a straitjacket is most likely be worn on the bare skin in order not to overheat, let’s talk about the material first. HML Fetish uses high quality, European sourced cow hides so you do not have to worry about Chrome-6. The leather of the jacket itself is 1mm thick which is a good compromise between the feeling of being clad in leather, the leather fitting well around the body and temperature control .The inside of the jacket is not lined but since all metal fixtures are made out of stainless steel, neither allergies nor rust should be a too big problem. Knowing HML Fetish I am pretty sure they can line the jacket with leather if you ask them. Despite the price point just below 1.000€, you get premium features like thickly quilted leather on the elbows which is a nice touch and keeps the elbows protects when the sub is made to crawl on the ground while being fettered. Another great feature are the nipple flats which measure roughly 10x10cm. Six sturdy snaps are keeping them in place so even a very actively struggling sub cannot get them off. 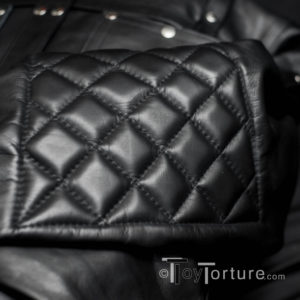 Detail of the Quilting over the Elbows

Like most straitjackets, the HML Fetish one is closed by a zipper. Then going down from head to waist there is a belt around the collar, one going around the chest and upper arm and one around the waist. These straps are led but leather straps riveted onto the body. On the back, two additional belts going over the zipper to tighten the jacket properly around the body. Like all straitjackets the arms are crossed over the chest with a belt strap on the end of the left arm and a buckle strap on the right arm. Once they are closed together behind the back, there is a strap in the middle of the front to secured them tightly and limit any potential wiggle room. Finally, there are two straps which run through the crotch to prevent the more than unlikely possibility that with crossed arms the jacket could be pulled off.

All straps are made out of 1.5mm thick cow hides which is doubled, glued and sowed all around which gives the straps a nice quality feel and touch of craftsmanship. The belt holes are reinforced with stainless steel rivets so the buckle’s pin does not damage the leather. The strap around the waist, the collar and the once securing the arm in front of the torso are about 40mm wide, all other straps are 25mm. 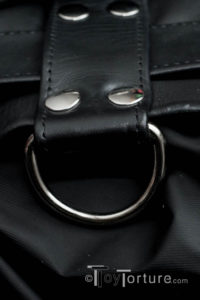 Detail of the D-Ring at the Bottom of the Body

There is only one D-ring on the entire straitjacket: In the middle of the torso, just above the waist seam. Again, when ordering this straitjacket, get in touch with the guys at HML Fetish and they will place D-rings where you desire and need them. My recommendation (from the way I play) would be at least three at the collar (center, left and right) and replacing the leather leading loops on each side of the waist and just below the shoulder so you can tie the sub between two posts.

The straitjacket comes in sizes from S to XXL and are pretty adjustable. So when you are a top who entertains different body types of subs, I recommend getting a largerish size; you can always tighten it afterwards. 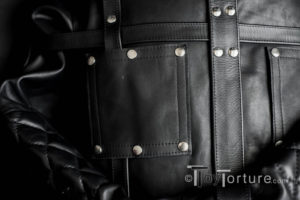 Detail of the Tit Flaps

Playing with the Straitjacket

Being put into a straitjacket is probably one of the most intense bondage experience once can have. Unlike a sleepsack where the sub is still somewhat in control of the putting on process (like slipping the arms into the arm pocket, adjusting the leg divider, etc.), once he has put the body one, the top is in control. He can move around the arms and with a leash even the sub at his will. While in a sleepsack the sub will most likely remain in the area where he lay down, in a straitjacket the sub is mobile and can be forced quiet easily into environments and situation the top wants him to be – regardless of how much the sub dislikes it. This mental aspect is one of the greatest appeals of a straitjacket. 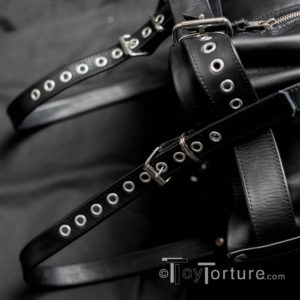 Detail of the Jockstrap-Style Crotch Staps

An important element of it, is the fettering process; the straps being tightened around the subs, gradually limiting the control over his arms and torso. While the HML Fetish straitjacket technically does this well, it falls a bit short on the sensation side. Since most straps are only 25mm wide, the tightening sensation is not as strongly felt as on most other straitjackets. I would describe it this way: Compare the impact sensation of a wood paddle and a thuddy flogger. The pain intensity might be the same, but the flogger with the sheer amount of kinetic energy will shatter and thrust you against the St. Andrews cross while the paddle “just” hurts. Quantity wise the effect it the same, but the quality wise there is a lot more going on with the flogger or in regards of straitjackets with wider straps. I have talked to the guys at HML Fetish about this and they the thinner belts are an aesthetic decision, leaving more of the body visible. But most of my testees said that the fettering process was disappointingly unspectacular so I guess you again have to ask during the ordering process if you can get wider straps if you prefer them. 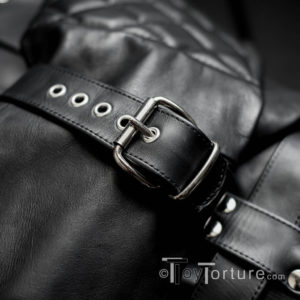 Again compared to a sleepsack a straintjacket is the perfect combination of active play and intense bondage sensation. And the HML Fetish one excels at that. With the relatively large tit flaps, you cannot only attach clamps easily but even do wax play when you are a bit cautious (and the sub is sound tightly enough so he cannot move). Due to the not too thick leather, lying on a spanking bench is comfortable and the crotch straps make a nice jockstrap-like framing of the cheeks for impact play. This straitjacket’s collar is even soft enough to just be loosely closed if you are putting a hood or muzzle on which already has a collar.