Let’s start this review with a bit of German leather history: About 1 ½ decades ago, there was a kinky leather craftsman working for VW in Wolfsburg. By day he clad car interiors in leather, by night he crafted some exceptional pieces of bondage gear – including as far as I know ten sleepsacks which are called “VW sleepsacks” by their owners. I could not find out for what reason but this guy stopped making gear over a decade ago.

Fast forward to the nowish time. One of my closest friends happens to own one of those sleepsacks. He knew I wanted one for my playroom so he got in touch with my other friends and they pooled for the birthday gift. He got in touch with a local leather tailor, sent his sleepsack as a sample, got my measurements and asked what features my ideal sleepsack should have and now after 2 ¼ years and many messages, I am reviewing one of the signature pieces of bondage gear in my playroom. 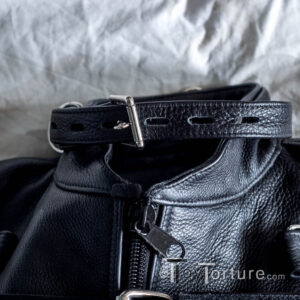 The cocoon-like body of the sleepsack is made out of 1.4mm thick medium-grain cow hide which is really soft. The entire sleepsack is lined with this hide so you end up with an almost 3mm thick layer of leather. But since the leather is so soft, is does not feel stiff but just hugs the sub’s body.

What now follows is all individually bespoke and can be crafted to your desires and needs. I went for a traditional neck to foot zipper. It is the easiest way to get into a sleepsack and especially in long-term scenarios more comfortable than to lay on a back zipper. I chose five runner for my zipper to create different opening for the crotch for example. To be honest, in all the play I had with the sleepsack, I only needed three runner (one to close, two to open up the crotch), because I ordered my sleepsack with tit flaps for easy nipple access. They measure 13x13cm on the outside with giving access to an area of 10x10cm and are attached using Velcro. The inside is smooth leather but I am sure you can also get it with spikes and pins for continuous stimulation. 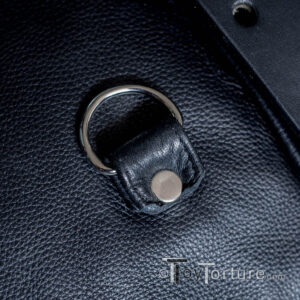 Detail of the D-rings of Rope Tightening

I chose several means to increase the bondage and leather encapsulation sensation. First, there is the collar. It is attached to the sleepsack with a wide v-neck in the front so it ends with my jaw line without being uncomfortable around the neck. Through this design there is no gap between a hood and the sleepsack and if I want to wear a muzzle or a hood with an attached collar, it still fits because the zipper ends below the neck. Around the collar there is a belt with a locking roller buckle and D-rings for the psychological effect of being locked inside the sleepsack. It is a purely psychological effect because once your arms are inside the arm pockets which I commissioned and the zippers are closed, any person with my rough body shape is not able to escape the sleepsack. 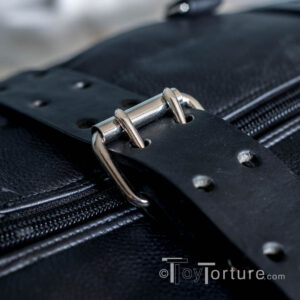 Detail of the Belt’s Roller Buckle

On each side of the sleepsack, there are 8 welded 7mm wire strength stainless steel D-rings riveted with leather flaps using six rivets. Through these thick bridle leather belts with double thorn roller buckles can be threaded to increase the bondage tightness or adjust the fit if you are slimmer than me. In addition to them, there are 8 smaller D-rings with “just” one rivets attached each side of the zipper. They are for threading rope through them for an ever tighter bondage and adding a different color to the all black sleepsack. On each shoulder and on the feet pocket there is another big D-ring. While they can be used to tied the sleepsack to the bed, I added them to be suspended inside the sleepsack either hanging on the shoulders or in a hammock like setup.

In order to unleash the true long-term potential of the sleepsack, I commissioned a cushion to put between the legs. This way there is not friction on the ankles and knees which would limit the time inside the sleepsack. The firmness of foam is soft enough to be comfortable jet firm enough to keep the joints from pressing against each other. The seam is one big piping so it is completely smooth. 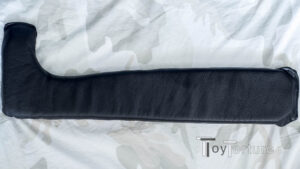 Detail of the Padded Leg Devider

Another advantage of having your sleepsack made by a leather tailor is that each sleepsack is made to measure. He does not simply purchase a sleepsack body and adds straps and D-rings as the customers asks, but builds everything from scratch. Through this, he knows his product inside out and if necessary can do alterations. Last year, I worked out my thighs a bit too much and gained so much muscle mass that I could not close the zipper around the legs anymore. I just send it in and he added two pieces of leather just around my thighs so the sleepsack maintained his overall fit. While the sleepsack feels solid and is made for scenes and generations to come, if you are nitpicky, you will little aesthetic flaws like not all rivets being set in exactly the same way, some belt holes might be a bit off. After all, he is not Mr S who make dozens of sleepsacks every year, but these little points does not affect the functionality. I gladly oversee these little flaws for having a leather sleepsack which is exactly how I want it to be. Also, he has made several of them since he made mine so I guess he gathered some experience making them by now. 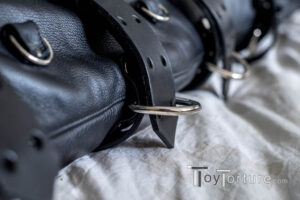 Detail of the D-rings around the Sleepsack

Naturally, all that leather and metal comes at a weight. In my case, almost 10kg. Even when packed tightly, it is almost a quarter cubic meter. I have taken this sleepsack to events in Berlin but it is not the most handy piece of bondage gear to travel with, especially when you do not travel by car.

As I written, this sleepsack was tailored to my demands and expectations. The original VW sleepsacks did not have D-rings on the sleesack but on the belts which were equipped with locking posts. So before ordering one, my recommendation is to try out some different sleepsacks (if possible) to figure out how your sleepsack needs to look like!

If you are a regular reader, you will most likely notice that a few weeks ago, I reviewed a rubber sleepsack. The big question is: Why another, way more expensive one? 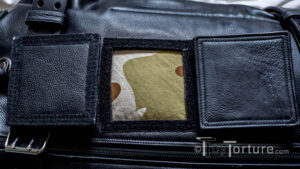 Detail of the Tit Flaps

So the major point is that inside a leather sleepsack the feeling of bondage is more intense. While rubber will stretch, leather does not give in. You are confined to the shell of a thick, heavy leather cocoon. Leather is the most common material in bondage because it is strong. You can fight, you can struggle, you can stretch, you can grab and (try to) tear. The leather will not give in. This also impact the tightening process. With the rubber sleepsack I have to be careful when threading the rope through the D-rings and tightening it. On this one, I can tug and pull to really get it tight without having to worry to rip the rivet out of the material. 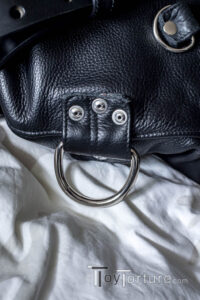 Detail of the Shoulder D-rings for Suspension Bondage

Because of these properties, the leather sleepsack is for heavier play or subs who like to struggle. With the D-rings around the sleepsack, it can easily be tied down so there is no wiggle room left for the sub. This comes in handy when inducing intense amounts of agony like through electro, CBT or milking. The tit flaps are large enough to expose the nipples to wax. And while wax does not destroy leather, it tarnishes the surface so some level of care is necessary.

For floaty bondage, it depends on your style. As soft as the leather is, it still maintains some level of stiffness. The thickness isolates the bottom from his surroundings. Because of that, the belts around the sleepsack are so wide that when tightening them the sub really feels the force and strength of the top. Add to that the weight of the leather and the feeling of being bound and helpless is more intense than in a rubber sleepsack. 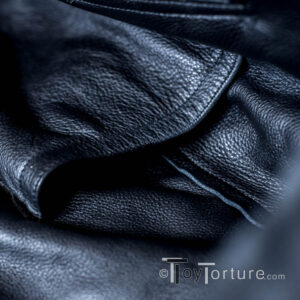 Detail of the Arm Pockets

In a normal playroom setting leather also offers a bit more comfort than rubber. Since the leather is so thick it regulates the temperature quite well as long as the room temperature is at a normal level and the sleepsack does not lay in the open sun. Being a natural material, it also absorbs some level of sweat. This is also the downside of leather. Unlike rubber it is very difficult to clean – especially a large piece of gear as a sleepsack. So if the scene should be long-term, I recommend putting a diaper on the sub. Because leather is so comfortable and the sweating is not really noticed unlike in rubber, hydration and overheating can become a problem. So check in with the sub regularly and maybe open a little gap in the zipper to check his body.