Both Versions of the Short McHurt Slave Driver

These toys are basically build like traditional all leather riding whips were made before the shafts were made out of polymers. The handle is made out of four layers of English bridle leather which is sowed and glued together. Out of this handle the slapper develops. Depending on the version it is either a 25cm long and 1.5cm wide strap of bridle leather or four 27.5cm long 7mm wide square cut bridle leather straps. At the back end there is a woven knot and a leather loop. Both versions have a total length of 55cm without the loop. 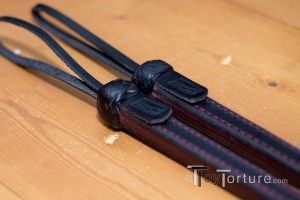 Detail of the Knot and Loop at the End

The come in different color versions yet for some weird reason not in all black. I chose black with red accents which I guess will still fit most play rooms.

When I first showed these toys to a friend he said “Well, they kind of look like the child of a single tail and a riding whip” and that puts it really well. Both whips are vicious! Even a light tapping already produces some level of sting that with just a little bit more force becomes intense. Though the single slapper is a little bit less intense than the other one. 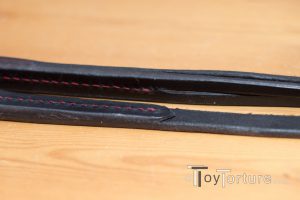 Detail of the Handle Turning into the Slapper

I like these toys for their handling. While in single tail terms the single strap one resembles a legree resp. dragon’s toung and the four square cut model is like a whistler, the handle of both toys are stiffer making them easier to control than a single tail. They are also just short enough to be used on a sub bound to a spanking bench yet just long enough to throw at the back of a sub bound to a St. Andrews Cross. Yet in this case most likely the tips only hit the back causing VERY intense pain. If you are more interested in the latter usage scenario there are longer versions of both toys available. Since McHurt doesn’t sell these toys online I sadly can’t tell you the exact length. If you are interested in them, just shoot them a mail. 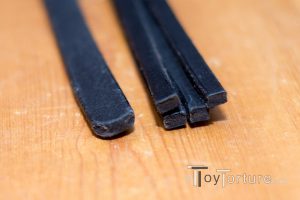 Both toys mark fairly well and quickly. While the legree like produced more bruises, the whistler like whip can leave welts. A top of my test panel managed to break the skin with the whistler in a long scene. I could not recreate that yet it is something to be aware off. Especially since the leather has not surface treatment and thus is difficult to disinfect.