I have gotten this toy from Mister B in order to review it. It was a nice reminder to review this kind of toy because I love it for its many possibilities to torture someone. 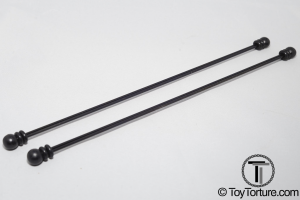 The Pain Sticks come in a pair for two nipples, lips, balls,…

The construction of this „clamps“ (due to lack of a better word I will just call this toy a clamp) is quite simple: two approx. 23 cm long varnished black steel sticks are glued parallel inside black rubber balls on both ends. There are also two rubber rings which slide on the steel sticks. It lays in the nature of the length and sturdiness of the sticks that toy can’t be worn tight fitting under gear.

I have seen versions of this toy made with wooden sticks but I highly recommend the steel version because it can be easily sanitizes. It is also noteworthy that Mister B sells them in pairs; sometimes you only get one which might be enough depending on your usage…

… and you can use it on a number of different body areas. The Thai Pain Stick is most commonly used as a nipple toy. You simply pull the two sticks apart and put the nipple between them. This can be a bit tricky because you can only pull the sticks approx. 1 cm apart which might be too little for a soft nipple. I recommend stimulating the nipple until it is a bit firmer by using your hands, sucking on them or using suction cups before trying to put the Thai Pain Sticks on. Another possible problem is that you can only easily put them on the tip of the nipple. The sticks are not too firm but the sensation can be too hard for a newbie. But if you have gotten the endorphins flowing by a little finger foreplay it should be ok. 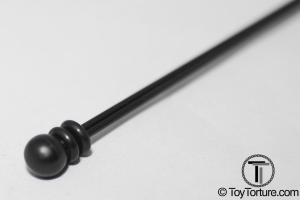 The Sticks Ends are housed in a rubber ball

Once they are in place I love this toy for it many play possibilities. The first thing you can do is increasing the pressure by pushing the movable rings closer together. Because the sticks are relatively long the pain intensity can be dosed quite fine without having to fear that it will fall off, unlike clamps where you have to i crease the pressure with a screw. Another way to remind the sub of the clamps once he got used to them is turning them. When turning the, there is a risk that the nipple will slip through the sticks which is very painful. But that might be just the thing you were going for…

The biggest advantage of the Thai Pain Sticks is that you can still access the nipple while the clamp is in play. There are infinite possibilities to add stimulation. One thing I love to do is playing with temperature. Either rub an ice cube over the tip of the nipple or just drop wax on that small area. The wax sensation is even stronger when you put the sticks into the freezer for 10 minutes before applying them… If you want to get really nasty, put safe irritants like bee venom salve on the nipple or torment it with a pin wheel. If you pulled the nipple between the sticks a bit further you can even add a second clamp onto them for added agony. 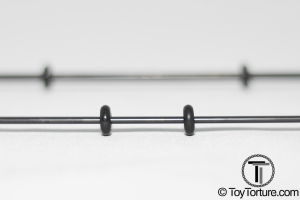 The two rubber rings make the difference between ecstasis and agony

Of cause you are not limited to the nipple when playing. The clamp can be put anywhere where you can pinch enough skin. My favorite other areas are the fore skin, the balls (be careful not to get a seminal duct between the sticks!), ear lobes and the lips and tongue. The pain sensation on these areas is not so intense but you can make a fun game: Put them on both lips and tell the sub that they must not touch and then start playing. If he wiggles too much they will enviably touch and your sub has earned a punishment.

Beyond the clamp properties I have found the pain sticks useful for a bit of impact play. Especially the balls on the end can sting a bit when snapped again the skin. Because they are so small this toy is ideal for applying pain to small areas like the glans or the nipples.