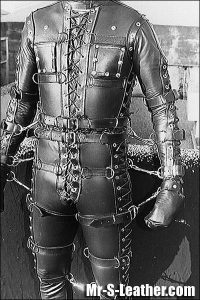 After last week’s desiderate of the Parus Heavy Leather Straitjacket I got some messages if I knew a piece of bondage equipment that offered an even stronger bondage sensation but wasn’t a sleepsack. That was a bit of a challenge I was happy to overcome.

I first saw the Mr S Bondage Suit on my trip to San Francisco in 2013. Just looking at it caused me a bit to panic out of claustrophobia. It is a massive suit made out of high quality fine grain hide that weights nearly 10kg. Yet with lacing possibilities all over the suit the bondage sensation can quite finely be adjusted: From a compact feeling to not being able to even bend. For a quicker tying down there are belts that can be easily adjusted. Once laced into that beast there are countless d-rings attached to the suit so the sub can be tied into a bondage frame or to himself in a stress bondage position. A nifty feature is that the pants and jacket can be separated so if you don’t want to have the entire experience you can still either have a bondagy looking pair of leather pants or a straitjacket. Despite the thigh bondage effect play is quite possible with tit flaps, crotch and ass access. 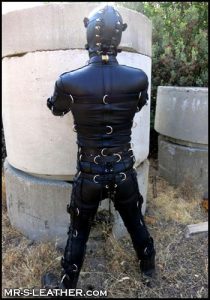 I have to admit that this is one of the priciest pieces of bondage gear with a price tag of $2,895 but it will be the most intense yet versatile bondage experience available on this planet. In order to create the tight feeling each suit is custom made to measure to fit the sub’s body perfectly. In this process custom design ideas are possible, p.e. a friend of mine got a cod piece instead of the lacing around the crotch.