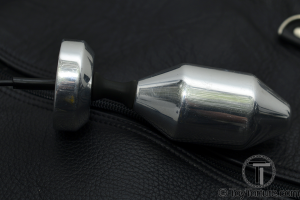 This is one of the few instances where I review a toy that I do not own and have been lent for extensive testing. I have used the large version of this toy multiple times as a top and had it used on me. Additionally I have talked to people who have owned it for many years so I believe I have a quite educated opinion about it despite now owning it yet.

As the name of the toy says this is an e-stim version of Mr S’ extremely popular World’s Most Comfortable Butt Plug. The large version that I could test myself had an 89mm long polished stainless steel head with a diameter of 44mm. The first quarter of the head is a dull cone which turns into a barrel of which the last fifth is again shaped like a dull-ended cone. The neck of the plug is an approx. 5cm long silicone covered flexible metal rope. The base is again made out of polished stainless steel and has a diameter of approx. 50mm. Onto the bottom of the base an approx. 1m long cord with a 3.5mm jacket is already soldered. Due to being made out of stainless steel the toy weights 396g including the cord.

There are two smaller versions out there: The Small with a head diameter of 3.2cm and weight of 226g and the medium with 3.8cm diameter and a weight of 312g.

Detail of the Flexible Neck

Playing with the toy

Once inserted and plugged into your electro box this plug due to the surface size and large mass delivers a smooth yet intense sensation. Due to the thin and flexible neck I found this toy quite comfortable to wear for long-term sessions. Because the sphincter can nearly fully close despite the heavy weight I never feared that the massive head would fall out of my ass or that the base would be sucked into it. But you still feel the massive piece of heavy steel in your bowel which is quite a turn on. Due to the connection between base and head being flexible it can’t sadly be influenced where head rests so a controlled prostate stimulation is very difficult to achieve.

I have to be honest: When I first held this toy in my hands I was not sure about the soldered cord. When you sit on the plug it bends quite a lot so after long usage I would expect a lead fracture. This would be especially annoying because since the lead is soldered onto the base you can’t just exchange the cable but have to solder it again. However I have talked to people who have been owning this toy for many years and never experienced a lead fracture so I guess even with this design Mr S stays true to their high quality standards. Where the soldered lead becomes a problem is when you want to dive into more elaborate electro play, strictly speaking when you want to work with tri-phase programs. The ErosTek ET312b and the E-Stim 2b can create a “virtual” third stimulation point through tri-phase cables or adapter. In order to do so you take a pole of two channels and connect it to a third electrode. Since you plug the Electrified World’s Most Comfortable Butt Plug directly into the box you can’t pick off a pole. The same problems comes up when you want to integrate it into a pole daisy chain using laboratory leads or use it as a heavy mass monopole. You can substitute this by using a one-jacket-two-plug-cable but will still end up with a bi-pole on one end. 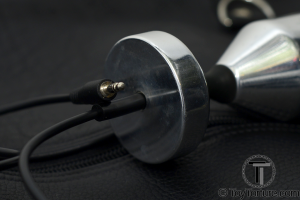 Detail of the Soldered On Lead

When choosing the right size of this toy I advise you to be a bit conservative. Being made out of stainless steel the material won’t give in so if you just can take the maximum diameter with a vinyl toy choose a smaller size. Due to the flexible connection between head and base you can’t or should not push and pull the head in holding onto the base. So the head should go in with some ease.

For this toy the same rule regarding lube applies than to the conductive silicone toys I have reviewed earlier: Do not use silicone based lube because it will destroy the coating of the neck and will work as an isolator.

Don’t get me wrong: It is a good electro plug, excellent at delivering an e-stim sensation. But when you are a perfectionist like I am who wants an indestructible toy that leaves you with all the possibilities you can theoretically have, I would recommend to look elsewhere.