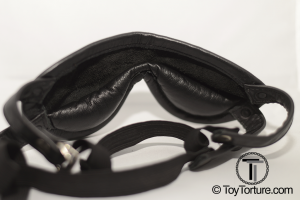 Pads below the eyes

As always with leather toys from Mr S this blindfold is made out of high quality leather.  The basic construction is like a sleeping mask you get on an air planes but with measuring 20cm from one end to the other it is large enough to cover the face of even people with large heads. Around the part covering the eyes runs leather piping which helps keeping the mask in shape. Below the eyes there are two thick and soft pads which help to block any light coming from below while keeping pressure from the eyes. When worn the mask is held in place by two straps: One is running above the ears, the other below. The first part of the straps is made out of trifolded leather mounted to the leather using rivets. The second part is an elastic band which can be adjusted to make wearing it comfortable yet pull the blindfold tightly enough towards the head in order block any light. 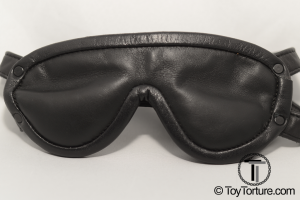 Putting the blindfold on is a bit of a hassle because at least the clumsy me had problems adjusting the straps while the sub is already wearing the blindfold which resulted in taking it off several times until it fit perfectly. But once it does it is frankly the best blindfold I have every worn: It is comfortable enough to be worn for a really long time, when adjusted correctly it can even withstand a sub ferociously wiggling while strapped down to a bed and still will block out any light. A nice feature are the two little pockets formed between the padding and the leather which can catch the tears of the sub.

Besides the use in the playroom the blindfold has become my standard sleeping mask when travelling because it blocks the light so well and is so comfortable. It even led to some interesting conversations and encounters while traveling to kinky events. But that is a different story… 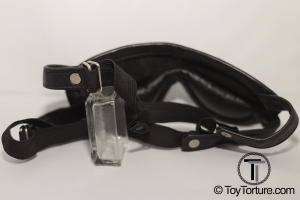 Detail of the double d-ring adjusting mechanism and elastic band

Mr S also offers a version of that blindfold called the Ultimate Blindfold which has only one strap running above the ear. I played around with it when I visited the store. It blocks the light as well as the Ultra Blindfold, is a bit more comfortable to wear because the ears sometimes get in the way of the lower strap and is $2 cheaper. However due to only having one strap to keep it in place it is easier for the sub to shed it when he is bound.