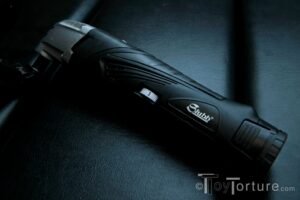 When Slubb launched their product, I am probably one of the first guys who got and then reviewed their innovative toy. Having focused on developing the milking attachment itself, they first sold it with an Einhell oscillating multi-tool (which I reviewed in the original test). Now they introduced their own power unit which I am going to take a look at here – exactly two years afterI reviewed  the original unit.

The new power unit comes in nicely branded box (which I intended to safe for pictures but misplaced…). Inside is the power unit, the lithium ion battery, the charger, a hex key for installing the Slubb and two manuals. One for the machine used as an actual power tool (probably included for legal reasons) and as a power unit for the Slubb. 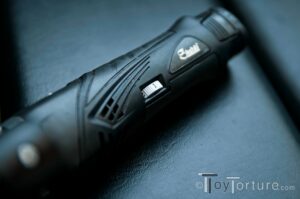 At 280mm overall length and roughly measuring 51x55mm at the point where you hold the toy, it is around the standard size of an oscillating multi-tool and about the same size as the Einhell predecessor. It is comfortable to grip for people with medium sized hands and upwards. Petit hands will have to invest some effort.

At 953g ready-to-play it is a whopping 123g heavier than the Einhell. If you put the power unit into a stand (like a Manfrotto Superclamp or a bicycle repair holder) this doesn’t matter. There is also a screw in the bottom of the head you can use to attach the unit to a holder. But if you manually move it up and down the dick for a stroking stimulation, the wrist can get tired quickly! At least if you edge and milk for hours like me… 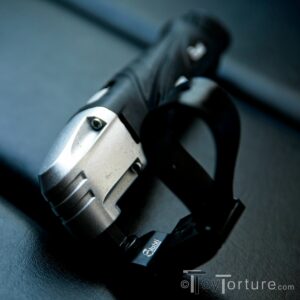 The head of the unit is made out of die-cast aluminum. This makes it a bit head-heavy but also gives it a very quality feel! If it falls, it will not get damaged easily!

On the old Einhell unit a screw in the easy-to-turn power dial prevented you from going to too high settings. On this unit the power dial is a bit harder to turn. This is a great improvement because you can now more finely and slowly adjust the intensity. At 3° oscillation angle and a theoretically oscillation frequency between 5,000 and 19,000 oscillations per minute the unit is a bit more powerful than the old one. Without a limiter, you can turn the power up all to 6 bit my recommendation is to stay below 3 with is rough 10,000 oscillations per minute. Anything higher feels uncomfortable and requires lots all well applied lube.

Depending on the intensity, it can get quite loud. Around setting 3 I got 82db which considerably louder than the old Einhell. Bit since the old unit was not quite by any standard, I don’t really complain. If you want a “quite” unit, you have to enter professional spheres with big three digit price tags. The intensity also determines how long the machine runs. I got around on hour of play out of it with a factory new battery and the battery takes an hour to charge. 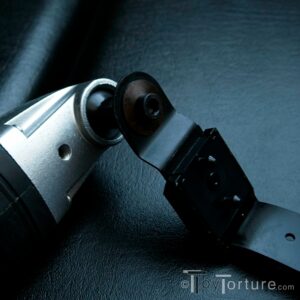 The Mounting of the Slubb to the Power Unit

In the handling, nothing has changed compared to the old model: Once it is attached to the power unit, adjust the loop that is it one hole larger than the circumference of the dick, apply ample silicone lube on the rubber strap and the dick and start the engines. There is no specific place where to apply the Slubb. The sensation is felt most strongly on the glans/ frenulum but moving up and down the shaft has its own interesting sensation. The more you get up the shaft, the stronger the vibrations are felt.

Like the old power unit, the new one made the rounds among my testees. It still made people with erectile dysfunction cum because you do not need a hard dick to experience the sensations of the Slubb. It’s also still the perfect tool to get another orgasm out of a well-used dick. And if you have a big dick, the 220mm length of the Slubb should be large enough to give pleasure where milking sleeves of massagers are too constraining. And since the Slubb is attached using a screw, it does not come off unlike massager sleeves. For a more detailed look, check out the review of the original Slubb.

The Slubb should only be used with silicone lube for two reasons. First, silicone lube lasts longer so you do not have to relube ever 3 to 5 minutes as I tested with water-based lube. Second, the silicone oil in the lube maintains the rubber. Cleaning of the Slubb is easy: Unscrew, bath in warm soap water, dry and you are ready to go again. 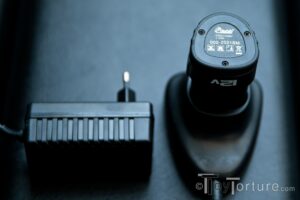 Battery inside the New Charger

In the construction chapter I wrote that I tend to edge and milk for hours. At least as long as the battery lasts. Preferring the up and down movement on my well-lubed glans and shaft, I have to hold the power unit in my hand. The unit gets noticeable warm. Not dangerously hot but very warm. These tools are not designed to be used continuously for extended periods of time. So you might run into an overheating shutdown like I once did. If you want to use it for hours, you have to get a really high-end pro unit with a power cord for several hundreds of Euros. For most sexual a consumer unit like this one is sufficient. But if you are a power-milker, hardcore edger or a pro-dom you should see if other power unit options fit you better. Though still out of the box, this power unit is still good for a long, satisfying and intense milking and edging.