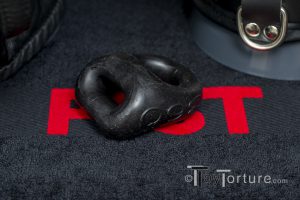 The 360 Sling is a new iteration of Oxballs’ popular cock and ball sling. I already reviewed several different ones, so it was a natural to also give the 360 a thorough workout. What sets it apart is the compact design. Measuring 75x60x45mm it is almost the same size than the Unit X Stretch. But instead of the Unit X Stretch’s thin walls, the 360 is made out of thick, bulgy tubes having a diameter between 16mm and 24mm. The hole for the dick has a diameter of 30mm. Below it is a 20mm thick tube which separates the balls. The hole for them is a 9x30mm slit. The half below the cock hole is a bit oblique so the junk is pushed forward. 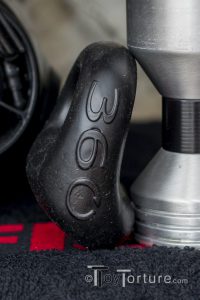 Detail of the Oblique Design

As almost all Oxballs dick and ball toys it is made out of super stretchy FLEX-TPR which comes in classic black, discreet clear or Oxball’s new Steel color.

Playing with the 360 Sling

The big question with all Oxballs sling is: How and how difficult is it to put the toy on? Compared to the other ones I have reviewed I would say, fairly easy. As always start with the balls and then put it over your dick. If you got low-hangers or a beefy ball sack, getting your balls through the narrow slit can be a bit of a challenge. But for most dicks and balls the large holes give enough room for the junk to roam freely when soft so the 360 is comfortable to wear for extended periods of time. Especially through the thick tubes and the oblique design, the sling makes a big package and bulge. So it is an ideal toy for fetish play involving watching, touching or worshipping big packages. Naturally the package comes out best with underwear which hugs the junk like the Mr S logo briefs or their heavy duty gangbang jockstrap. Despite its accommodating design and stretchy, forgiving material, it is tight enough to restrict the blood flow just enough to function as a cockring. Through the thickness of the tubes, the 360 can work as a seal for pumping your dick when you are using thick-wall instead of flanged  cylinders which diameter are not too much larger than you dick’s diameter. 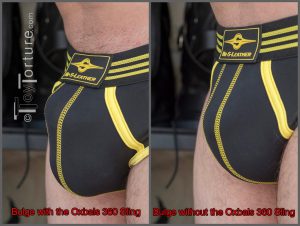 Illustration of the Bulge-Creating Properties

If you have got low-hangers like me, there is a bit of sad news: With just 20mm the stretch on the balls is too little. The balls being pushed forwards adds a little bit of bounciness to jerking off or fucking, but for a real effect you should at least add one or two other rings from Oxballs.

FLEX-TPR is a pretty resilient material so you can safely use it with any kind of lube, making it ideal for gunging worshipping/ wrestling scenes where a big package is appealing. Cleaning it is equally easy: Warm water, dish soap and a sanitizer after it dried will keep it in good shape for scenes to come.