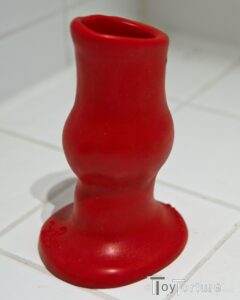 In the lower half the design is almost like on his shorter brother: An oval base surrounds a 40x60mm hoping hole. The base is wide so it does not get accidently sucked into the rectum. An about 40mm and thus almost twice as long neck as on the standard Pig-Hole raise out of the base. Above it sits a barrel shaped body which on the inside is reinforced by grooves so it does not collapse that easily. The body measures 71x85mm on the outside (if you have a technique to measure the inside dimensions, hit me up) so size-wise the Deep-2 sits between the Pig-Hole XL and XXL (or 4 and 5 if you go by the embossed numbers). The biggest difference between the standard and the Deep Pig-Hole is above the body. Out of it raises a tube. Since its top is slanted it is 55mm high on the short and 70mm on the tall side. 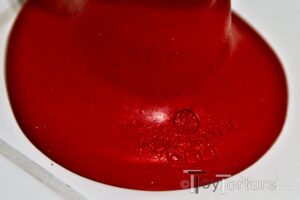 Like on all Pig-Holes there is a little relievo with the product name and the size number rising from the base’s rim – just in case you are wondering which size your greedy hole just swallowed.

There is a smaller version out there called the Deep-1 which is about 17% smaller in every dimension and thus too small to fist through for example. I would only recommend buying it when you rectum is too small to fit the Deep-2’s long tube. Otherwise, buy the toys for the hole you want not the hole you have, while respecting your body’s limits, especially depth-wise. 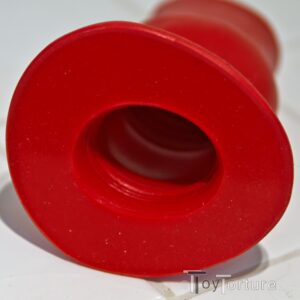 Playing with the Pig-Hole Deep-2

Most important thing first: The Pig-Hole Deep is made for loose holes. Really loose holes! If your hole cannot swallow the tube and the body with ease, you will not have much fun with this toy. While the  standard Pig-Hole can be folded to be pushed through the sphincter, the long tube and the barrel cannot be folded when lubed up. So it either goes in as it is or it doesn’t.

Still with me? Then you are a greedy ass pig and this toy is a good addition to your toy collection! Both the opening and the body are a bit smaller than on the Pig-Hole XXL. Yet a determined fister with maximum medium sized hands can fist through the neck, placing the fist inside the body. Once there, the fun really starts. When he starts to move his wrist and fingers, the end of the tube will stimulate the sensitive mucosa of the rectum. Fisting into the Deep-2 is easier with the blue colored Morph Silicone version which is about 10% softer than the red and black silicone. While this does not sound much, it is a lot! Yet it requires an even looser hole to be inserted. 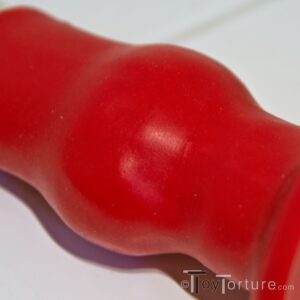 In really rare cases, the anus and the second sphincter align that the tip pushes through it, sending the bottom into ecstasy.  In this case, the Pig-Hole Deep is a great gateway into the colon, making depth play with toys considerably easier. But this is a unicorn situation just two lucky testee tops each had once.  Another unicorn situation is finding a top with small hands and arms who can push trough all the way – if you have a large enough rectum. A friend of mine has XS hands and managed to do this with his partner. Every movement of his arm and wrist was transferred onto the toy, stimulating anus, prostate and rectum at the same time. 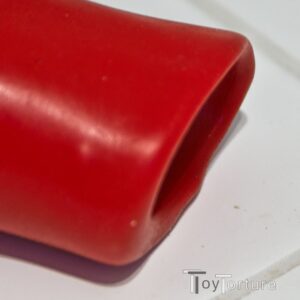 But enough for these borderline and once-in-a-million cases. Even if your top has large hands, the Pig-Hole Deep has much to offer. Twisting the tunnel plug will stimulate the rectum because the slanted top moves over the mucosa. For even stronger stimulation and added pressure on the prostate you can stuff it with other toys; my choice is a SquarePeg Medium Acorn or XL Egg. These toys are perfect for transmitting vibrations. Simply press a massager of your choice – I would recommend a Doxy – and watch your bottom squirm. In theory you can place the massager’s head into the Pig-Hole Deep’s body but I would only recommend that if you have a masochistic sub, a soundproof playroom and your bottom is securely fettered inside the sling (including some form of waist restraints!). The direct stimulation is VERY intense and lead to quick safewording – or hands-free orgasms. It was definitively not my cup of tea but everybody is different.