After posting the mandatory toy arrival post on Twitter and Tumblr in November, I have had a steady stream of messages asking me if the toy works respectively holds up the promise the design makes. After a long and thorough testing period, these simple questions turned out to be quite difficult to answer.

In order to create this unique setup, Oxballs combined different, already existing toys in a new, clever way using clear, 9.5mm diameter silicone hoses. A 65mm long piece connects the Piss Lock which I reviewed in February with two 90cm long hoses. One hose goes to the Chomp Gag which I reviewed last week, the other to an aluminum tunnel butt plug. My set has the medium size plug which has an overall length of 80mm, a maximum circumference of 38mm and a head length of 55mm. There is also a large version available but with a maximum diameter of 49mm also not really large, especially for anal savvy bottoms. There is an adjustable clamp on the hose leading to the plug to either direct the liquid flow towards the gag or keep it inside the rectum. 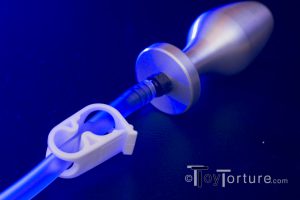 Detail of the Tunnel Butt Plug with the Adjustable Clamp

Playing with the Recycler

There are two major play scenarios for this toy, the first one being turning the sub into a self-sustaining piss recycler. It is a hot fantasy of many subs to be forced to drink their own piss over and over and the layout of the toy promises exactly that. Sadly, in reality it does not work so easily because much to my constant annoyance even SM toys have to surrender to physical laws – despite Patrick Califia calling SM sexual magic – which means gravity will pull all liquids to the lowest point in a closed system. Looking at the three most common bondage positions – lying down, standing/ kneeling or doggy – either the dick is the lowest point of the ass with the anus being the lowest point of the rectum. So while some piss will flow into the rectum, the majority will stay inside the hose because the weight of the water column is not high enough to push it inside. When shutting off the hose to the plug or connect the Piss Lock directly to the Chomp Gag, you are facing the same problem. If the sub isn’t tied on a tilted bondage table with the head facing down, the head with the gag will always be higher than the dick. With an internal diameter of 7mm, the 90cm hose has a capacity of approx. 140ml so the sub should have a large load inside his bladder in order for a significant amount of piss to reach his mouth. But this is only the case if the sub’s dick is large enough to fill the Piss Lock well enough to seal it. Otherwise the piss will flow out of the cage instead of into the tube. To a certain extend sucking on the gag helps the piss to travel up. 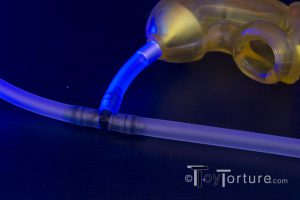 Detail of the Piss Lock with the T-Connector

The next scenario is being the courtesy piss bottom at a party. If you want to fill his ass and his mouth, he should either be lying down or be in doggy position. If he kneels you need to connect the short hose to the gag and the long one to the funnel. Also, you should tighten the clamp a bit to reduce flow to the plug and additionally encourage him suck, otherwise no piss will reach his mouth. Naturally, at a busy party it is way too complicated to put the Urinal Lock over each dick, especially in this setup only one can piss into the sub at the same time. My recommendation: Get the IKEA Chosigt funnel set (which also comes in yellow). The tube of the larger one has diameter of 10mm, so isolation tape can be used to seal the gapes and attach the hose to the funnel. 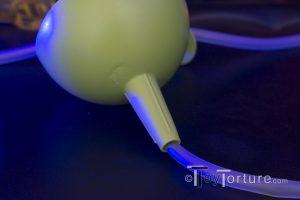 The IKEA Chosigt Funnel attached to the Recycler

After all this negativity, all piss bottoms involved in the testing process liked the Recycler for the mind fuck it provided. After you played with it for a bit, you learn all the kinks to make it work and the right scenarios where it will deliver. As you can read in the separate reviews, the parts of this toy are really great but sadly the sum cannot quite live up to it.