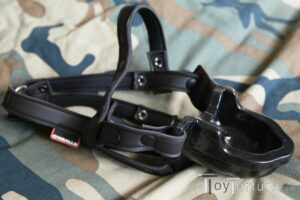 Over the years Oxballs introduced several gags, plugs and even systems to turn greedy piss pigs into obedient urinals. All of them had their short-comings. But – to get ahead of myself – this one is a massive leap forward!

The main body of the gag is an US urinal-like shaped body which roughly measures 105x95mm; the bowel to piss in measures 80x72x45mm. Unlike its predecessors the body and the outlet is cast in one piece. The outlet tube sits at the bottom of the bowel, flanked by juts so the last drops gather in front of it. It is 37mm long and has a diameter of 30mm with a bulge at the end so it cannot slip between the teeth. Another important improvement is that the recess for the mouth now sits above the trough’s rim. So it can be filled to the max, the nose is still close enough to smell the piss but the sub can still break (and the top can easily hold his nostrils together without getting his hands wet when he doesn’t swallow quickly enough…). 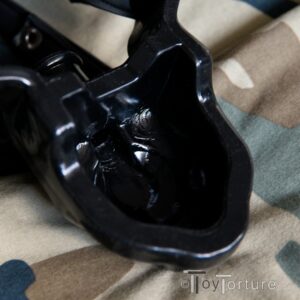 Detail of the Trough’s Interior

Left and right, on top and bottom of the body are wings with rectangular holes. Through these neoprene straps are threaded. The each strap has four snap fasteners on one side to adjust the length between 230mm and 300mm to fit most heads. On the other side the four straps meet at the back of the head in an O-ring, yet again closed with a snap fastener. My recommendation is to switch the straps around because it is easier to adjust the length of the straps at the back of the sub’s head instead of fiddling around in front of his face. For this new gag Oxballs added another strap with four snap fasteners which runs across the head. It locks the gag firmer into place. 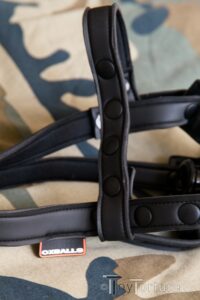 Detail of the Forehead Strap for an Extra Snug & Safe Fit

As already said the entire body is cast in one piece and made out of Oxballs FLEXtpr. It is non-toxic, phthalate free and thus body and drink safe. It cleanes easily and the liquids drip off beautifully, flowing towards the bottom of the trough 😉

Playing with the Watersport Strap-On Gag

The most important aspect of a piss gag are the performance KPIs: The trough and outlet tube have a capacity of 135ml if you fill it to the brim. While this does not sound much, the large internal diameter of the tube allows for a flow rate of roughly 3600ml per minute. It takes a trained piss sub with a good swallowing reflex to keep up with this amount of liquids entering his mouth. Since the gag is cast in one piece, there is now piss flowing out next to the outlet so the top can monitor how much piss is actually swallowed. While the trough is not too large, with a bit maneuvering two (slim) tops can piss into it simultaneously. 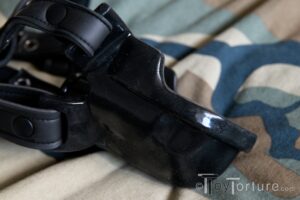 Detail of the Trough with the Wings for the Headstraps

The outlet tube has a very good ergonomic design. The diameter is small enough to prevent lockjaw even during longer periods. This partly due to the FLEXtpr being a soft material so the teeth rest comfortably on the tube. Yet it is sturdy enough to take some strong biting down to pinch off the piss flow. Also it is not too long to make subs even with small mouths gag yet long enough for somewhat effective tongue suppression. Of course, a determine sub can still block the liquid from entering his mouth but compared to other models on the market it takes more effort. 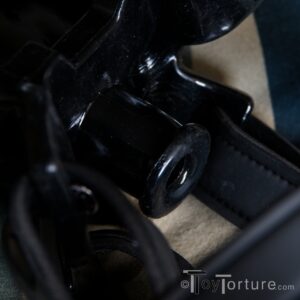 The new strap design is also a huge improvement. The wings on the side really hug the head. The two straps despite not using Velcro anymore and thus limiting the adjustability make for a more secure fit. The perpendicular strap improves the secure fit even more. But the more important aspect is the psychological one. The three straps for most of my testees turned a “simple” gag into a head harness, a piece of gear that enveloped their head. Add to the sense of drama and transformation when the straps are adjusted and fastened. This created for most of them a stronger piggy headspace, a feeling of being “turned” into an object to serve.