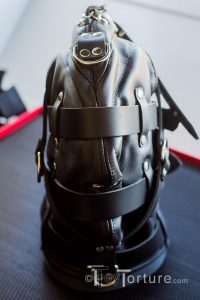 The Parus Isolation Hood No 2406

The hood is made out of a single layer of soft European sourced leather. There is thick padding covered with soft leather from behind the ears to the nasal bridge covering both half of the face. From the part all the way down there is lacing to close the hood tightly. To fetter the hood even tighter around the head there are four belts with roller buckles running through riveted leather loops: One around the neck, one over the mouth, one over the eyes and one running from the chin over the back of the head. At the middle of the collar, at the top of the hood and one on each cheek there is a welded D-ring. At the bottom of the nose there are two grommets to allow easy breathing.

The hood is one size fits all. Even though my head is average size the leather strap to lace the hood is too short but it was easily replaced with a longer one. Despite the leather being soft through the sturdy and thus stiff belts and thick padding the hood is rather stiff. In order to mould the hood to the sub’s head and make it soft and comfortable it takes a couple of hours. The body heat and sweat will do the rest. 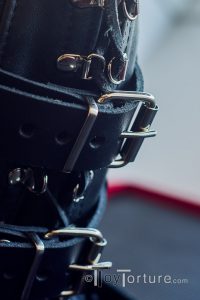 Detail of the Lacing and the Roller Buckle of the Belts

Playing with the Parus Isolation Hood

With the lacing and the belts the hood can really be fettered heavily onto the head. Despite the little amount of light which bleeds through the nose grommets once you start lacing you quickly feel the world around you being blocked out. So some people who are not used to such intense bondage start to panic right away. In this case I recommend only using the belts to slowly accustom them to the sensation. But once you get used to it, being put into the hood becomes an intriguing part of the scene itself. While the soft, high quality leather is getting wrapped tighter around the head it emits a rich smell. So there is a feeling of being immersed in leather. 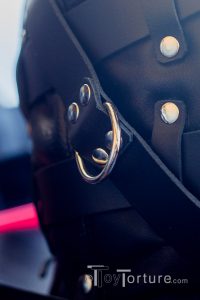 Detail of the D-ring and the rivetes Leather Loops

Like all isolation hood it doesn’t take away all the senses. But the padding muffles the sounds (to block out even more use earplugs) and creates the right amount of pressure. Not uncomfortable or putting pressure on the eyes but noticeable enough to create a strong bondage sensation. This in combination with the lack of sight creates a feeling of detachment from the surrounding. For a full immersion the hood needs to be made soft like described above. When the leather is still a bit stiff there can be light coming through the nose grommets. But once the hood becomes a little bit more flexible the padding over the eyes shuts the light out.

The loss of sight and heaving with the warmth and pressure sensation can lead to disorientation of subs. So I recommend not fettering them standing up without having something to hold onto respectively being tied to something. Especially when lying down the D-rings can be used to tie the head down completely. When doing so the top D-ring should be the one tied the strongest so that sub doesn’t suffocate when struggling.