Preserving the Burning Fire – On Outgrowing and Passing on Toys 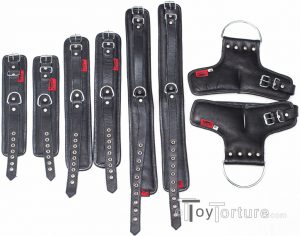 The First Restraints I have ever bought: The McHurt Ihsan Wrist, Ankle and Boots Cuff and Hand Suspension Restraints

The concept of energy exchange also includes that some of the energy of the players stays in their gear and toys. For that reason some pieces of gear or toys are special and dear to perverts and not easily parted with. Most often floggers, boots or bar vests are considered to be special in that way. In my case three pairs of McHurt restraints are that way. They were among the first things I reviewed for this website and liked them a lot. It feels, they have been with me forever. But when I looked up the order date for writing this article I was stunned: I had only bought them in early December 2011. Not even half a decade felt like a life time. This illustrates really well what they mean to me. All the fun, experiments, surprising experiences and intense emotions are somewhat bound to them. Yet as I matured as a kinkster I outgrew them. While I still stand to my 3 ½ year old review and consider them a good pair of restraints to start out with I want more: More padding, more D-rings, more build quality, more features. So I choose the Fetters Padded Locking Wrist and Ankle Cuffs from Regulation to replace them. 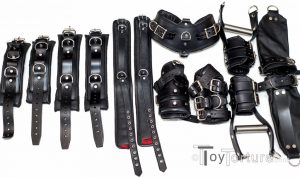 This evaluation process happened with some toys over the last year. I looked at them and realized I haven’t been using them in a long time; saw no real play scenario for them anymore so I sold them to friends, to strangers, to anybody interested. These restraints were different. They not only represent for me the scenes I had in them but also my getting serious about BDSM: Committing to my longings, considerably investing money in this part of myself and somehow giving my desires a physical representation. Yet despite all these arguments I decided to pass them on. As soon as I would get the new ones the old ones would become an exhibition piece. Laying in my toy chest, reminding me of good times and fond memories. But like an instrument not being played anymore, they would be a dead accumulation of matter, slowly fading away, losing all the energy stored in them. So giving them away just by chance was no option! They are too special for me to see them disappear out of my life. Ultimately I decided to give them to a young pervert who is slowly exploring his desires, being just like me 4 ½ years ago willing to commit to his dreams and turn them into reality. So these special pieces will continue to live on in the BDSM scene until he outgrows them and hopefully then passes them on to someone special just like I did.

As important as these restraints are to me I am lucky that I am not parting completely from them: The set I ordered back then also included a pair of boot restraints, large enough to even fetter MX boots. A toy I have not seen elsewhere yet and thus I am keeping it: For memory sake, for current play, for future times when this mythical and mind-blowing bond between top and sub manifests again.