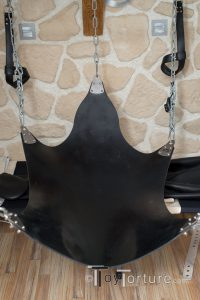 Rubber is one of the major fetishes in the kink community. As hot as the material is for fetish wear and gear it has some major drawbacks when it comes to manufacture toys out of it: It is hard to cut into shape making the manufacturing process complicated and thus expensive, compared to leather is cannot withstand much force, it dissolves after contact with oils and it needs to be maintained with silicone oil. So when it comes to toys for hard play I stick to leather. 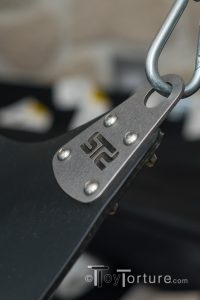 Detail of the Stainless Steel Fittings

I know that there are some rubber slings out there but none of the addressed all the potential issues I mentioned above – unlike the SeriousToyS Rubber Sling I have bought. To be honest I was skeptical when considering the purchase because the sling is more expensive than most leather slings and after all being made out of rubber I feared I would at least have to deal with some of the drawbacks. But since the guy who designed this sling did an awesome job designing my bed with added bondage functionality I gave it a try. 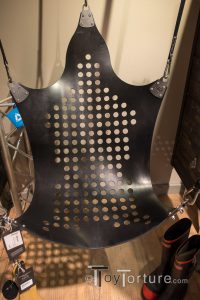 The SeriousToyS Rubber Sling with Holes Cut into it

The sling is a five point design so there is space to rest your head when lying in the sling. It comes in two sizes: Standard which measures 122cm by 75cm or XL which measures 122cm by 95cm. They have also made a model with holes cut into the sling which is great for piss-heavy scenes. The sling is made out of three 2mm thick industrial rubber layers which are reinforced with Kevlar. Instead of using D-rings housed in riveted rubber loops for suspend the sling from stainless steel fittings are used. They are screwed to a counter plate with four screws. This design prevents shearing which is necessary. While most leather slings resp. their fittings give in around half a ton of static load at best an entire Smart car has been suspended from this sling. So even when you really plowing a heavier bottom in this sling, it can withstand the high dynamic load. However, there is a major drawback of using rubber as a sling material: It has a rather low thermal conductivity so even in a well heated room the sling will be rather cold when lying down.

Despite the material being hard to work with the manufacturing quality is perfect. Computer controlled water saws are used to cut the rubber so the shape is even. Unlike most other common rubber play items the edges of the sling have been deburred so there are no hard edges which could potentially damage rubber gear or abrase the skin. 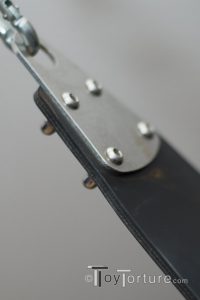 Detail of the Three Kevlar reinforced Layers of Industrial Rubber

The Sling Suspension Solution in my Playroom

One of the main advantages of rubber is that it is unaffected by most things. Commonly in play involved substances like piss, poppers or silicone lube can tarnish a leather sling while the rubber maintains its mat shine. Being made out of chlorinated industrial rubber you can even use oil-based lubes like Crisco in this sling without damaging it. This in combination with the fact that it is easy to clean makes this sling the ideal choice for group scenes where you can simply spray the sling with a sanitizer and whip it off or raunchier play. Being made out of industrial rubber the SeriousToyS Rubber Sling doesn’t even need maintenance like applying silicone oil.

For suspending the sling for the ceiling they recommend a rectangle of 1.5m by 2.2m for the standard size sling and 2m by 2.2m for the XL version. However are you can see from the pictures taken in my playroom if you can live with some small niggles and are creative you can even put it up in room with a challenging layout. Last spring they also introduced stir-ups made out of the same rubber and with the same stainless steel fittings for 99€ a pair. They are larger and wider than all other stir-ups I have seen so far. So if you like to wear big waders or MX boots while getting played with in the sling these might be the stir-ups to go to.