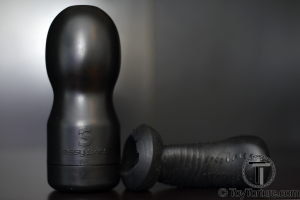 The case with the Sleeve turned inside out

The toy is roughly sand clock shaped, 16.5cm tall and with a diameter of 6.6cm. The case is made out of a somewhat flexible black plastic. On top is a little hole while the bottom is close by cap. Inside the case is the approx. 13cm long black sleeve which appears to be made out of TPR. The opening of the sleeve is supposed to be anal but seems more to me neutral so it doesn’t resemble any anatomic features. The first half of sleeve is a bit tighter and is textured with low profile ripples, the second half is wider and with low profile dots. The toy comes with a foam piece around it to create greater friction.

This toy is used like any masturbator: Lube up your dick using waterbased used (silicone and fat based lube will disintegrate the sleeve!) and shove your dick into it. Once you have entered you can put a finger over the hole on the top to create a vacuum or squeeze the case for a tighter feel. Once you are done, you can take the sleeve out of the case, wash it and turn it inside out for drying faster. 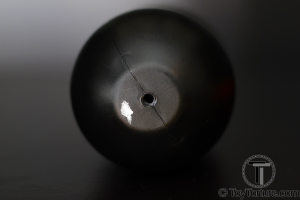 Hole on the Top for Creating a Vacuum

So much for the standard usage. Now to the play experience. This is one of the few spontaneous purchases I have made when it comes to toys. A couple of month ago I had a hell of a scene being bound, getting my nipples played with and some light BC done by one guy and the other one edging and milking me with the oral model sleeve of a Fleshlight. I want to recreate the sensation for another scene but couldn’t get an original Fleshlight where I live and didn’t want to invest so much money for a toy I would probably not use too often. But in Germany we have a saying “The one who buys cheap buys twice.” and sadly the saying also applies in this case. 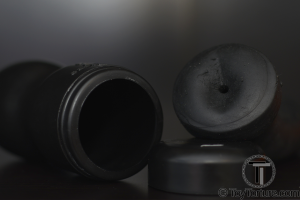 I love my hand and never saw the need for a masturbator but I was ready to change my opinion but I was disappointed. While the material of a Fleshlight felt almost skin like (my thoughts were sort of elsewhere in the situation) this material smells a bit and is sticky. I would consider my dick average size yet the sleeve was too tight for me when using it with the case or without it. It was also a bit short. Once your dick is lubed up you don’t feel the texture because its profile is way too low. But with the right dick you can overlook this shortcomings; I have actually had some testees who theoretically enjoyed the sensation if the material would have been less sticky. But the two major problems ruin this toy: First the suction can’t be adjusted. You either close the hole at the top with your finger of you open it up. There is no state in between. Second theoretically you can increase the sensation by increasing pressure on the case. But it is so inflexible that the increase is negligible. Of cause there is the foam tube which fills out the space between the sleeve and the case. Or there was: I used this toy for an edging scene and the sub started pissing after he came so I had to throw the tube away. I replaced it with a ductape shut freezer bag filled with rice which is water proof. Sadly I was told by my more masturbator experienced testees that all inexpensive share on of the other shortcomings described above so this is a middle of the road masturbator. So if you look for really good a masturbator, take some more money look elsewhere. Either invest in a real Fleshlight or get a caseless jerk-off sleeve from an established manufacturer like Oxballs.