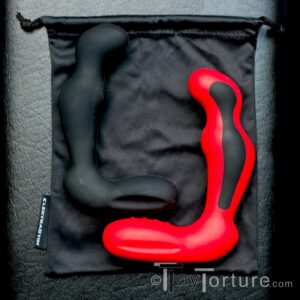 Last year ElectraStim introduced their new Fusion range of e-stim toys which stands out through a signature red & black color pattern. So for this year’s E-Stim Special I decided to compare how the new Fusion prostate massager compares to their “old” yet still in production Noir one.

Both toys follow the same basic design: A bean shaped head sits on a small neck perpendicular to a roughly kidney shaped body. At the bottom of it, there is a hinge to adjust the angle between the body and the base. This is necessary because everyone’s anatomy is different so in order to target the prostate some adjustment is necessary.

The base is oval and again a bit bulky. Through the bulgy at the tip, it can be used to stimulate the prostate area on the perineum. Inside the lower half of the sides there are grooves for better grip when manually moving the toy to massage the prostate. At first glance, the base is the biggest difference between the two toys: At the Sirius it is completely smooth and has for 2mm pin jacks perpendicular to the bottom. The Habanero has four ridges on the top and at the bottom there is a big recess with two 2mm pin jacks parallel to the body and deep cable ducts to organize the lead. 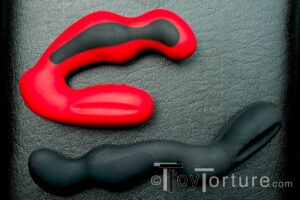 Detail how both Toys can Bend to adjust to each Body

Other difference come up when you look at both toys more closely. While both have a max. insertable length of 115mm, the Habanero is bulkier in all dimensions: The head measures 29x43mm vs. 25x41mm; the body 34x44mm vs. 29x37mm. Also the cast seam running around both toys in the middle is almost not noticeable on the Habanero while you can see albeit not really feel it inside your anus on the Sirius.

As you can tell form the number of jacks, the Habanero is a bi-polar toy. The black conductive silicone patches are very prominent on the red silicone of the body. Both patches run on the sides from the head down to the neck above the base. The Sirius has four conductive patches: Two on top of the base and two running from the head till the middle of the body.

Both toys are made out of medical grade silicone. So they are a 100% body-safe – and a dust magnet. As you can see from the pics, despite washing them thoroughly before taking the pictures for this review, the time to dry was enough for them to get dusty again. Luckily they are easy to clean! Just wash them in hot dish-soap water, let them dry, spray sanitizer and then store them away. To protect them from other plasticizers of other toys in your toy box, they come with a nifty cloth storage bag. 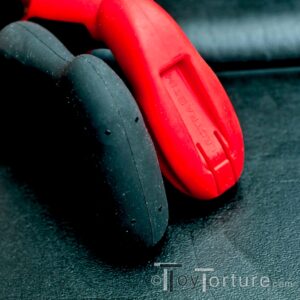 Detail of the 2mm Pin Jacks of both Toys

Playing with the Sirius and Habanero

There are two aspects to look at when comparing the two toys: The mechanical and electronic stimulation. Mechanical stimulation means putting rubbing and pressing on the prostate both inside the rectum and on the perineum and enjoying the stretching sensation inside the anus when moving the toy in and out. In this category the Habanero is clearly ahead. Being bulkier, the stimulation on all three areas is stronger. A healthy prostate has about the size of a walnut. The slightly flatter and larger head of the Habanero is better to target it. There is a lower chance of slipping when applying pressure on it. When “tickling” it between the head’s bottom and the neck, the longer slope is beneficial. The same applies for the more voluminous body for stretching the anus. Because it is considerably longer than wide, twisting it inside the anus or during fucking, is an interesting experience. Over time, most testees developed a “routine” how to move the massager to synchronize maximum prostate and anus stimulation. This is important because piling up as much sensations as possible is necessary to ultimately achieve an anal or prostate orgasm. Though both take a lot of practice so don’t expect them out of the box (unless you are VERY talented). Finally, there is the perineum stimulation and to be honest, there is not that much difference. The ridges on the Habanero do not increase the stimulation significantly. If you are hair, it is actually quite the reverse. But again, the bulkier size helps with the applying pressure to the prostate and the larger base generally make the control of the manual stimulation easier. 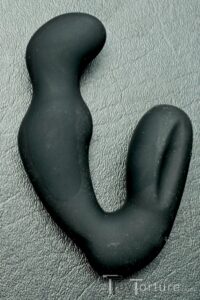 Naturally, both toys should be well-lubed before being used. ONLY use water-based lube on them. Silicone lube will disintegrate the toy, starting with making the surface sticky. Furthermore, silicone lube is an isolator while water-based lube conducts electricity which is essential for the electronic stimulation.

Before I dive into looking in the differences of the two toys, first a short general excurse on e-stim sensation: Independently from the selected program and power unit, it is determined by mass and surface area of the conductor. The smaller and lighter, the stingier it will be. Being made out of conductive silicone, the sensation of both toys is on the stingier side of the sensation spectrum. This is not necessarily as unpleasant as it sounds. In low intensity it can be an enticing tingling. But when turning it up, it can become excruciating more quickly than on metal plugs for example.

This being said, looking at the two toys, this time the Sirius won more favors in my testee panel. This is largely due to having four poles. A vertical pole split instead of a horizontal is unusual for an insertable electrode but a common on ElectraStim products. Through this layout the popular fucking sensation of the wave-like patterns is not popular. Instead it focuses the sensation right inside the sphincter which leads to an interesting phase of re-discovering your power box. When I played with both plugs, I started to like programs I never liked and hated some of my favorites. Since the Sirius does not only have poles on the sides but also on the top of the base, you can create a connection between those pole pairs. Then the currency somewhat flows through the prostate which I personally found a more enjoyable and more stimulation experience (the prostate rivals the anus with nerve ending density). However, since the leads stick out of the bottom of the Sirius instead of being lead out of the body like on the Habanero, using the Sirius is a bit complicated. You can basically only use it lying down, while you can sit on the Habanero, riding and grinding it for max. manual stimulation.

So, in the end, which one of the two is for you? It depends on what you are looking for. If your focus is on e-stim, get the Sirius. It is more flexible and the more elaborate e-stim toy. Also, if you are familiar with e-stim, you have probably found ways of dealing with suboptimal lead positions. If your primary focus is the manual stimulation you want to spice up with added e-stim fun, I would recommend the Habanero. All things considered, the prostate play savvy members of my testee panel managed to get prostate orgasms with both. So regardless which one of the two you choose, with enough training (and being chaste long and not too long enough I have been told…), you will learn how to climax with them.