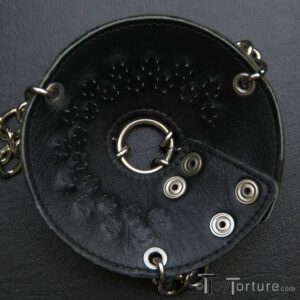 The Spiked Parachute from Regulation

Sometimes weird things happen at ToyTorture.com: Following last week’s review of the Tenderizer Paddle, I have gotten a message asking if I have played with the Spiked Parachute from Regulation. Since this toy has been in my toy chest for it feels like forever, I went to my website to copy the review link for my reply. But it turns out: I actually have not yet reviewed this toy! It also turns out that I have some CBT gear from Regulation that I have not reviewed yet, a mistake I will soon correct!

This toy starts out as a standard parachute design. The double layer leather body is 5cm wide and is close by two snap buttons. There are two sets of male buttons so you can choose between either 2.5cm or 3cm diameter for size of the hole which goes around the neck of your balls. Through rivets three chains are attached to the body which come together in a ring that is large enough to house most tool carabiners. As the name says 24 sets of 5 spikes on the inside set this parachute apart from the tamer versions. 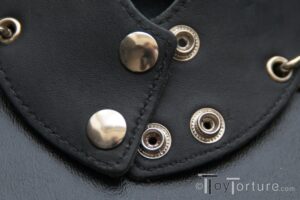 Detail of the Snap Button Closer

Playing with the Spiked Parachute

I have to be honest when I first unpacked this toy I was skeptical: The leather was a bit stiff and the ring to which the chains connect was not welded. But my worries were unfounded: Despite hanging a LOT of weight onto the ring it didn’t open up. This was also a good test for the snap buttons that even under large physical stress of a wiggling bottom or large amounts of weight swinging on them didn’t give in. And after some leather conditioner and warmth the leather of the body softened. 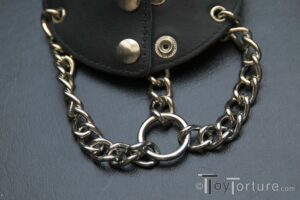 The Anchor Ringer of the Spiked Parachute

This toy works like every other parachute but just with a little interesting twist. Unlike normal parachutes this one works without attaching something onto it. Just put it around the subs balls and let him walk. The movement and friction around the parachute created by the moving legs is enough to cause the spikes to make an impression. Depending on the duration and the amount of movement this can be anything between annoying to agonizing. When you use this toy like a normal parachute a bit of caution is advisable. While the spikes should not break the skin they intensify any draft induced sensation. Usually subs enjoy the moving momentum of weights swinging from their balls but with this toy the added sting can become excruciating after some time. This effect is even more interesting when you tie the parachute just tight enough to a spread bar that the chains are taut. As soon as he starts to move the spikes will dig into his scrotum so he has to calm himself despite the pain in order to make it go away. This is especially fun when you tie the parachute to nipple clamps that will stick to the nipple even when wiggling a lot. The loop of induced sensation is phenomenal. 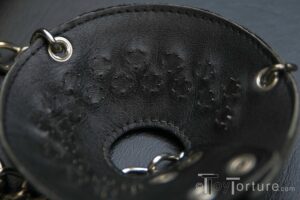 The Two Rows of Piercing Spikes

I had the most fun with this in a CBT competition with two subs: They had to choose a parachute by just looking at the top. One got a normal one, the other this spiked one and taking turns they had to endure the same strength of stimulation like amount of weight, weights dropping from a certain high until someone safeworded who then received a punishment that the other one determined in advance believe it was for himself (I know I can be evil at time).