The Mega Milk’it borrows its basic shape from the popular Egg plug with it smooth, oval body, a smaller neck and a stretched base to fit comfortably between the ass cheeks. Though both sides of the body are very different: One side has a small bulge above before the taper towards the base, very similar to the Acorn. The other side has been “cut off” and replaced with ridges around the rim and two thicker, thus sturdier ones sticking out of the hollow carved into the body. The base on the side of the ridge is flat, on the side of the ridges it is curved upward like on the Egg plug. 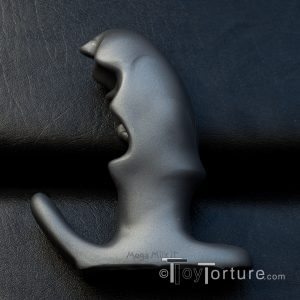 The overall height of the plug is 150mm of which the body takes up 110mm. The body is 64mm wide and measuring the ridges on the rim 54mm deep. Because the ridges fold easily and the body has relatively little mass due to the deep hollow it folds easily, making it easy to insert despite the texture. The upward pointing tip raises 40mm above the base. 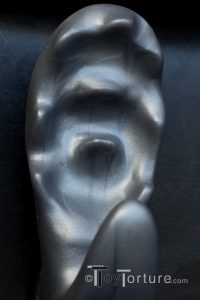 The Ridges inside the Hollow on one side of the Body

Like all Square Peg toys the Mega Milk’it is made out of platinum silicone which makes the toy body safe, hypo allergenic and easy to clean. Though you should not use it with silicone lube because the silicone oil in it will damage the toy.

Playing with the Mega Milk’it

As written already, the Mega Milk’it is quite easy to insert. I recommend using lots of lube, maybe even injecting some lube into the ass because this is not a toy for long-term wearing but for moving inside the hole targeting the prostate. Alternatively – for extra effect – hold the head of a massager against the base. The soft material will transmit the vibration onto the prostate and sphincter making it buzz and the bottom squirm and scream. 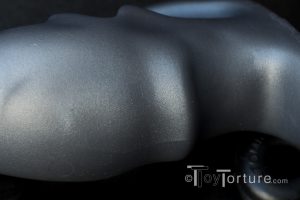 Detail of the Bulge on one side of the Body

Both sides have very different effects which greatly depend on the bottom’s anatomy. The bulge is meant for moving the toy in and out, massaging the prostate in a smooth, flowing way. Some testees – like me – would have wished for a little bit more prominent bulge but this can easily be fixed using Square Peg’s Peg Away Putty. The ridges both work when fucking with the toy but also for twisting inside the hole and are a little bit better for vibrations because through the smaller contact area they are felt more intense. In order to fully enjoy the ridges, the ass has to be fairly relaxed; otherwise the just fold creating a still textured surface instead of sticking out ridges. When using this side of the toy, the base’s tip also massages the prostate on the perineum. BUT: The side only worked for about 60% of my testee panel.  To explain why, let’s dive a bit into anatomy: A healthy prostate is an about walnut sized organ sitting just behind the sphincter and above the perineum. Depending on the individual anatomy, it can be half a walnut bulging the rectum’s mucosa or just be a little, almost unnoticeable rising. If the latter is the case, the ridges inside the hollow do not reach is, just the flappy ones around the rim can stimulate it, making it hard to target. 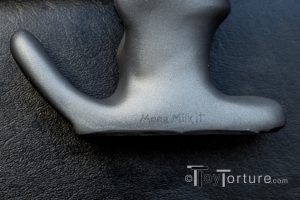 Detail of the Base

So despite this being a good and fun toy, I would not consider it a great toy. The hollow is too deep to make it enjoyable for everyone. The ridges are just a bit too flappy for an on point stimulation. Part of the criticism could be addressed with offering the toy also in Firm Black. With this added firmness and with just a little bit thicker (thus sturdier) and especially in the middle longer ridges, it could bring fun to every prostate.

If the Mega Milk’it is too large for you or you do not like the textured side, Square Pegs offers a variety of other prostate massagers like the Charlie Horse Milk it which is basically a smaller size of the Mega Milk’it or the Kidney plug – in small Charlie Horse and large – which “just” massages your prostate with a bump but otherwise is smooth.