The toys used for this review were the large Slink on loan from TeckPup and my own Depth Probe 1.25×20’’.

Despite looking quite different, both toys share the material. Like all SquarePeg toys, they are made out of platinum silicone which is hypoallergenic and easy to clean. While the Slink is made out of their SuperSoft Silicone and comes in their signature Bronze or stylish Graphite, the Depth Probe is available in Firm Black. 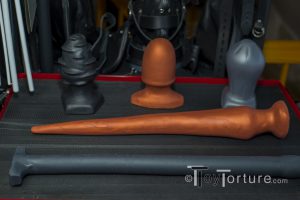 The design of the Slink is a very long-drawn-out cone with gently rounded tip. After the maximum diameter it tappers like a butt plug and ends in a base which is approximately 20% larger in diameter than the maximum stretch, so the entire toy is not accidently swallowed by a greedy hole. As a special order the FlushCup suction cup can be added to the base of the Slink.

The Depth Probe is one long solid silicone hose. The top tenth is a bit thickened and has a dull tip while the bottom is shaped like a grip. On one side of the hose there is an inch scale to determine how deep the toy has been inserted yet.

Playing with the the Slink & Depth Probe 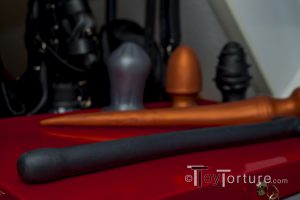 For getting into depth play, most testees found the Depth Probe more useful. Being made out of “firm” (still, you can tie a knot in my 20’’ long one…) silicone, it is a less floppy than the Slink and thus easier too control. The dull tip makes getting around the bends more difficult but the added stiffness opens up the colon for the tube which follows and straights the colon out more easily.

The pointy tip of the Slink on the other hand can feel a bit spiky on the mucosa. Also, the floppiness makes it a bit difficult to get around the first bend which connects the rectum and colon. But once inside the flow of the toy and the nimbleness makes it easier to get around the bends. The increasing diameter helps to stretch the tight colon over time to prepare it for a hand. When interested in self-play, the Slink with the suction cup is the best option. To insert an anal toy, most people crouch or squat which tenses up the colon; for sitting on and gently riding them, both toys are too soft. But attaching the Slink to a tile wall and wiggle the ass until the Slink finds it way, is the most relaxed way to stuff oneself deep. 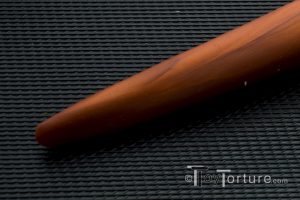 Detail of the Slink’s pointy Tip

Especially when playing with the longest Depth Probe, a deep cleanout before play is a must. Usually a human’s large intestine is 1.5m long so reaching the small intestine with a hand or a toy is unlikely. But if this happens and bacteria from the large enter the small intestine, serious infections can happen. Another important safety advice is, regardless of the play style or D/s relationship between top and bottom, depth play should never be done forcefully! While a sphincter and the rectum can take a relatively hard beating especially after training, the colon’s mucosa stays fragile and tearing it can lead to serious, possibly lethal injuries and infections!

As already said, both toys are easy to clean so they are ideal to be used on different partners after a thorough cleaning. The smooth surface makes it difficult for bacteria to settle and the material can be autoclaved (after cleaning off any lube residue!) to be entirely sure. But also soaking it in hot water with dish soap and vinegar cleaner, letting it dry and spraying sanitizer on it, works well, especially when you want to use it again quickly. 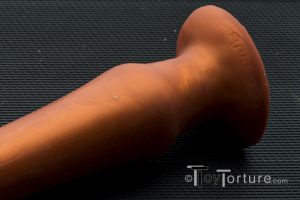 Detail of the Slink’s tappered End and Base