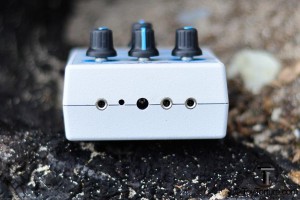 Detail of the Inputs and Outputs of the Erostek ET232

How does E-Stim work?

In order to create a sensation you need at least two electrodes with different poles that don’t touch each other and are connected to one channel on a power unit. This unit generates electric impulses onto which usually wave patterns are modulated. These impulses travel from one electrode to another and stimulate the nerves in the area roughly around the electrode. Due to the way nerves are distributed throughout the body and the way they transmit information it is possible that the stimulation can be felt elsewhere, p.e. in your glans even though the electrodes are around the balls and the penis root. The sensation is felt stronger at the electrode with the lower the mass and/or the smaller contact area. If the difference between the electrodes is very large (p.e. using a big anal monopole and a small silicone loop) it is possible that the sensation is only felt at the smaller pole. Generally speaking it can be said the larger the mass and the surface area covered, the smoother the sensation feels yet the more power is needed to produce agonizing sensations.

Electro play is a delicate play where only a little further twist of the knob can mean the difference between agony and ecstasy. So here are some guide lines I found sticking to useful. 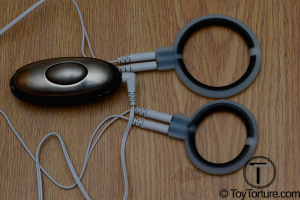 When preparing a sub for play I attach the leads to the electrodes, than put the electrodes onto or into the sub. Than I make sure that all channels are completely turned off, connect the box with the power source and than check again if the channels are off again. After I that plug the leads into the power box. Just for security reasons I prefer to run the boxes just on (the internal) batteries because they are limited to 9V (resp. 12V with the ET312b’s internal battery). It is highly unlikely that the PSU will malfunction but I prefer to ere on the side of caution.

When starting the stimulation I would recommend slowly increasing the intensity until the sub starts feeling a slight tingle. Depending on the form of day (p.e. the amount of sweat on the skin), the electrode and power box used, the body area where the electrodes are put onto and the program selected the intensity level needed to create a recognizable sensation can vary. So there is no general rule from which intensity level to start with. The same applies for breaks: A level that brought out the grunting horny pain pig might be excruciating even after a short break because the body’s pain memory and processing system calm down quite quickly. So after every break ease the sub into the sensation and stimulation level again. While the area in the brain which transforms pain into pleasure forgets quickly your nerves don’t. Thus it is normal to feel some buzzing sensation in the area where the electrode was placed for quite some time even after the electrode has been removed. This sensation can last for minutes up to hours.

If something goes wrong DON’T FIDDLE WITH THE BOX! Just pull the leads out of the box! Once no currency flows anymore the sensation stops!

What do you need to play

In order to create a sensation, you need a power box that creates the impulses, leads for connecting the box to the electrode and at least two poles in form of electrodes.

The power box is an electrical device that converts the DC which comes out of the power adaptor or the battery into AC. Inside the box is an amplifier which creates a pulsed electric pulse; a continuous pulse is rarely used because you can’t feel the difference but the battery would get drained more quickly. Onto these pulses a wave form is modulated. These are the patterns which are called programs and are the basis for an interesting stimulation. 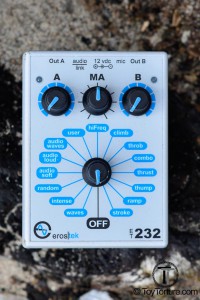 The Erostek ET232, an analogue E-Stim Box with two channels

Good power boxes have an amplifier for each channel. I would always recommend getting a box with isolated channels because not only do you have the full power on each channel at your hand but if your box is not faulty there is no unintended interaction between the channels. This is especially important when the heart lies between the electrode pairs. Most boxes have two channels which I find the most useful because you can stimulate the ass and the dick p.e. at the same time. There are inexpensive boxes out there with only one channel which are a good compromise for beginners. There are also boxes out there with four channels but I would not recommend them because they are difficult to operate.

Power boxes come with analogue and digital wave form modulators. There is no general saying which is better. Due to the form factor of the boxes made for erotic stimulation digital boxes most of the time allow more and complex manipulations. Depending on their processor their waves can feel a bit chiseled because they are only able to create stairs-like wave patterns and boxes with little processor power create large “steps”. Having a digital generated wave pattern enables accordingly programmed power boxes to end the wave pattern after one wave has been produced. This comes in handy if you want to train someone by letting him experience only a single wave. However digital boxes tend to be more expensive, especially the ones with more sophisticated setup options like the Erostek 312b or E-Stim System 2b. So I would recommend starting out with an analogue box and if you start to feel the limitations of the box in your play upgrade to a bigger box.

Some power boxes come equipped with an additional interface. The most common ones are an audio interface either through a line-in and/or a microphone or a shock sensor. Especially in combination with another box you can create evil setup (p.e. the louder the sub screams from stimulation of one box the stronger fires the other one and he can only break out of the circle when he gets a grip on himself).

There are two major systems for connection leads: 2.5mm audio plug onto 2mm pin used p.e. by MyStim, Zeus, Rimba, P.E.S. and most medical devices for home usage and 3.5mm audio plug onto 4mm banana plug which is used by ErosTek and E-Stim Systems p.e.. When starting your E-Stim toy collection I would recommend choosing one system for which you buy your leads and use adapters to incorporate toys from the other system into your play setup. Theoretically it doesn’t matter which system you choose. Practically I would advice you to use 3.5mm audio onto 4mm banana plug because it is the professional industry standard used p.e. for lab equipment. So most pervertables and inexpensive leads, adapters and splitters are based on this system. If you have a box from the other system buy 2.5mm onto 3.5mm adapters.

Electrodes can be divided in two categories: Surface electrodes and insterable ones.

Most surface electrodes usually have a limited mass and contact area so they mostly create a stingy sensation. Keep this in mind when choosing your toys: Some might look that they are great for tingling sensation play but the effect might be agonizing. Another attribute the majority of surface electrodes share are that they are monopoles by design. So when incorporating them into your play use them in pairs or combine them with another electrode or a bipolar one using a tri-phase cable. When doing so keep in mind that the direct path mustn’t cross the heart! 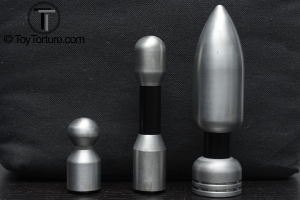 I call all electrodes which are designed to be put into the body insertables. They come in two varieties:

In order to transfer the stimulation from the electrode onto the body there has to be a conductive medium between the electrode and the nerves. Since the body consists of a quite high amount of salt conductivity inside the body is no problem. However on the skin there is only a limited amount of salt from sweat, etc. Since these accumulations of salt are usually very concentrated the currency will flow only in limited areas leading to a stingy and quite strong stimulation. In order to prevent this you can use conductive solutions. There are special electro gels out there which are in my opinion a waste of money. Every water based lube which contains glycerin will work perfectly. I have conducted a blind test between conductive gel, Swiss Navy water based lube, ID Glide water based lube, Elbow Grease H2O and Aqua Glide and none of the probands noticed a difference. There are special sticky conductive lubes out there for attaching surface electrodes to the body. They provide some level of adhesion but they are designed for still sitting patients. Since your sub is probably going to be a bit more active I recommend saving the money on these special products, use normal water based lube together with adhesive tape.

I hope I have covered the most interesting and burning questions when starting electro play. If you have any questions, additions or suggestions please send men an e-mail.