The main element of a shock collar is small box which houses a power generator and two stud-like electrodes. The “professional” models designed for dogs are attached to the body using a nylon strap. There are also fetish models out there which feature a rubber or leather collar or are integrated into a metal collar. The shocks are controlled by a wireless transmitter. Depending on the model it can have a range of up to kilometer in an open area. Others are compatible with beacons which trigger the shocks once a line is crossed like an invisible fence.

I am aware that a lot of people will now say that they have been using shock collars for years without any problems. A common argument in the discussion is that you can use low levels which are not dangerous. In my book, shock collars are like solo breath play: It can go well a thousand times, until this one, fatal time. Furthermore, most of the time nerve damage does not occur instantaneous but develops over time. While lower levels are less dangerous, I do not think they are a valid argument. As usage of the shock collar progresses, the sub will get desensitized and used to the intensity, leading to an escalation. This can be facilitated by endorphins (on both sides when the top is getting greedy) during play and the power dynamic between the play partners leading to pushing each others’ limits. And this does not take into consideration that some boxes don’t offer different channels for the trigger so strangers can (un)intentionally shock the sub without the top’s control. Another grave danger is the fact that there are a shockingly large number of shock collars available which put out DC, especially from Asian manufacturers (If you don’t know why DC is potentially lethal, read my E-Stim 101)!

If you still want to use a shock collar, you should also consider the legal implications. In some countries, shock collars are more or less illegal. In Germany they are considered a weapon. Owing them requires a license and they must be transported in a specific manner. In Austria selling, buying, owning and using them is illegal. Since shock collars are explicitly not made for humans, (permanent) injuries cause by them are most likely not covered by liability insurance. Furthermore these injuries might be considered a form of battery the sub is not able to consent to which can be a basis for criminal charges.

Finally, if you still want to use a shock collar, here are the pieces of advice I promised:

This collar is the matching one to the restraints I reviewed a couple of weeks ago. The basis of the collar is a sturdy bridle leather body. Onto the body a folded, 6.7cm wide piece of soft garment leather is sowed so the collar can be worn for extended periods of time without feeling uncomfortable. On the Fetters version instead of the double layer leather there is padding lined with soft garment leather.

Onto the body the bridle leather belt is riveted. The length and holes right until the first rivet allows for circumference between 30cm and 54cm. The belt is closed with a roller buckle for easy handling. Behind the buckle there is a locking post to lock the collar onto the sub. There are four solid, welded D-rings hold in place by the rivets.

The Mr S version is available in black, grey, rad and blue while you can get the Fetters model now in eight colors from classic black and grey up to vibrant green. 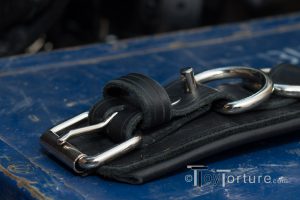 Like I wrote in article about collars this category of toys fulfils two purposes: The first is showing to the world belonging and attachment. Being so comfortable and well made I have friends who wear this collar almost all the time when they are not in the office. This collar is just wide enough to be noticeable and thus remind the sub that he belongs to someone else yet narrow enough not to be annoying and thus interfering with his tasks. The locking post adds a great psychological momentum because the sub is not able to take the sign of the submission the top has put on him off. 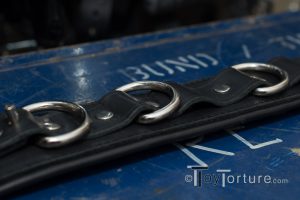 Detail of a D-Ring

From the play perspective what sets this collar apart is the number of D-rings. With four there are ample possibilities to attach the sub to furniture or other objects or the other way round attach things to the sub. Keeping in mind that anything that pulls on the neck can strangle the sub the collar can be incoorperated into numerous bondage layouts. A D-ring is a good place to attach rope for elaborate rope bondage layouts. On a lazier and more stressful side of things four D-rings are just enough for a very intense hogtie using ankle and wrist restraints. 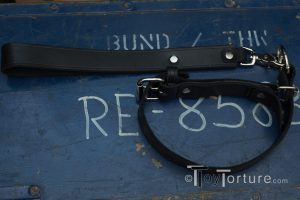 Today I am actually reviewing two toys: The Quick Choking Collar and the Short Leash. But since the work together so well I thought I review them together.

The Quick Choking Collar has two pieces. The first is a 42cm long bridle leather belt with hole punched on the one side and a welded steel ring hold in place by a rivet on the other side. The second piece is made out of three layers of bridle leather with a roller buckle on side and a rectangular steel gate with a roller barrel on the other side. Above this gate a leather flap is riveted.

The Short Leash is a loop made out of Mr S’ high quality bridle leather. On the bottom there is a carabineer with a swivel link riveted in place. The overall length of the leash is 38cm including the carabineer. 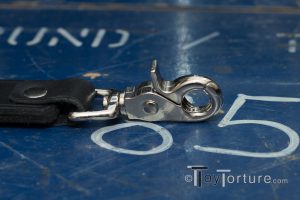 Detail of the Carabineer of the Mr S Short Leash

In order to put the collar onto the sub put the steel gate onto the belt and close the belt with the roller buckle around the neck. Make sure that the leather flap covers the gap between the two leather pieces so skin does not get pinched when the collar is pulled on. Than attach the carabineer to the steel ring. If you now pull on the leash the collar tighten reducing the blood flow to the brain in the two arteries on both sides of the front of the neck. The sensation will range from feeling of pressure inside the head to lightheadedness up to black outs. The intensity of the effect is determined by the force and duration of the pull. Reducing the oxygen supply will release an adrenaline rush. However limited oxygen supply can lead to permanent even fatal damages so only engage in such play with people you trust. 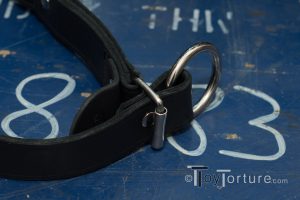 Detail of the Quick-Pull Choke Collar

This ambiguous nature between pleasure and danger makes this an intriguing toy for top – sub (esp. puppy) couple who know and trust each other. Placing desired things just out of reach or encouraging the sub to escape so that he has to choose between choking or enduring can be a very hot scene. One testee put the collar on his bottoms to pull the ass closer when fucking them vigorously and increasing their submissive headspace through the choking action.

The Short Leash is a useful toy with every type of collar to lead the sub around, hand him over to other tops or keep your puppy in check when he wants to run away. Being made out of stiff bridle leather the loop can also be used as a medium intensity, quite stingy spanking implement.