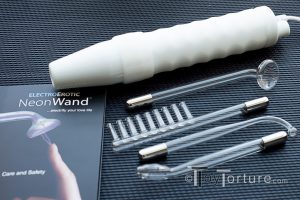 Like almost all violet wands the NeonWand consist of two pieces: A power unit which has a socket on top for interchangeable electrodes. The power unit of this model is 23.5cm long and has an average diameter of approx. 45mm. Inside is a solid state power unit which means there are not moving parts like in traditional power unit. So moving the toy won’t affect the sensation delivery. The lower ¾ of the power unit is covered by a soft textured material for better grip. On top is a 12.5mm socket for the electrodes which is the diameter most violet wands use today so most electrodes from other manufacturers should fit. At the bottom of the power unit is a rotary control for the intensity and the 2.3m long power cord.

The NeonWand comes with four electrodes made out of glass and filled with a noble gas:  A comb shaped one and three rods with a mushroom head, a small probe head and a tongue head. 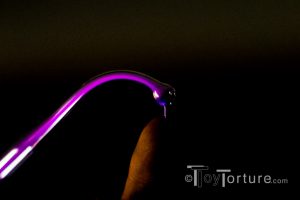 The Electric Arc and Purple Glowing Argon inside the Electrode

Violet wands work much differently than the TENS units I have reviewed so fare. The power unit is a Tesla coil which produces static electricity. The currency doesn’t flow through the body but an “electric arc” appears when the electrode comes close to the body. If the electrode touches the skin just warmth is felt. Since no currency is flowing through the body the violet wand can be used on almost all body areas (but the eyes which is an absolutely forbidden area!) safely. It is advisable not to use a violet wand for an extensive period of time at the same body area. Burns like sunburns can occur. I would actually recommend using a moisturizing lotion after using a violet wand to clam the skin.

Unlike TENS e-stim units violet wands don’t have stimulation patterns (more commonly called “programs”). Only the intensity can be adjusted. Depending on the electrode the sensation can range from a light tingling to excruciating pain. The NeonWand is not the most powerful wand out there but it is certainly powerful enough for an interesting scene.

As with all e-stim toys conductivity is the key to the sensation which is influence by three factors when it comes to violet wands. First there is the electrode’s conductivity. Most violet wand electrodes are made out of glass and filled with a noble gas; these are quite conductive. There are metal and conductive silicone electrodes out there which have better conductivity and thus stronger sensations. Second there is the skin conductivity which is influenced by many factors like sweat for example. Improving skin conductivity can be achieved by conductive gels, water-based lube or heavily moisturizing lotions with urea or zinc oxide for example. This can be used to creating a “ladder” out of conductive strips so the intensity keeps changing while you run the electrode over it. 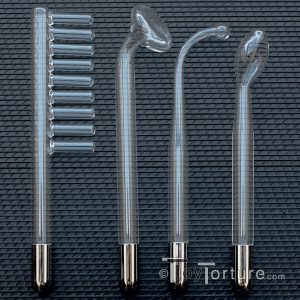 The Four Electrodes which come with the NeonWand: The Comb, the Mushroom, the Probe and the Tongue

Third there is the contact area. This is where the different electrodes come into play. While the Probe and the Mushroom are just different contact area sizes which don’t change you can use the comb and the tongue creatively. Just twist and turn them to alter the contact area. All electrodes can be used to inflict sensations on conductive materials like a chain wrapped around the subs. The longer and thicker the chain the less sensation is felt so I recommend using only thin otherwise the power unit will not be powerful enough to induce a noticeable sensation. Generally speaking a violet wand is best used to sensation play or teasing e-stim sessions. Since you can move around the electrode quite freely sensations can be spontaneously induced on surprising spots of the body.

What is important to keep in mind is the material of the provided electrodes. As much fun/ agony are they are on “moist” body areas as the glans of an uncut guy or the anus I strongly recommend against inserting them into the body. The chance of them breaking is simply too high.